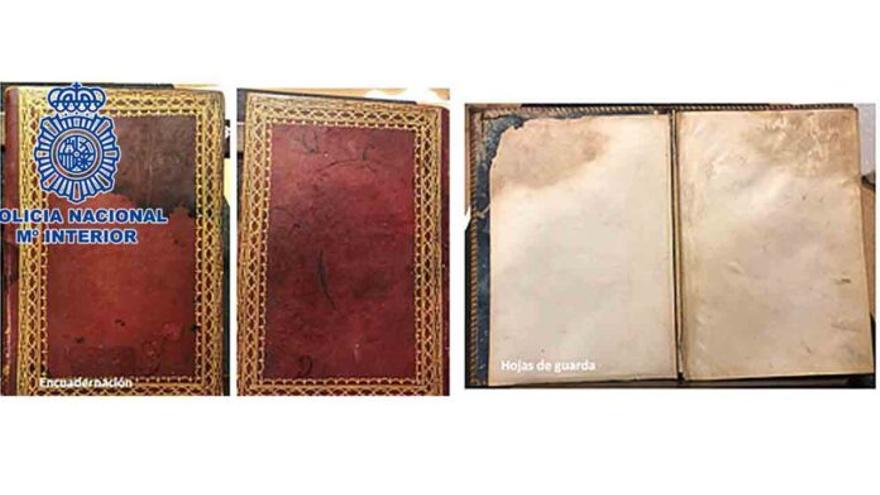 Nobody “ever” thought that the ‘Atlas Portulano’ of the XVI century signed by Battista Agnese and made for the still prince Felipe II was going to appear, but this piece of “great historical and economic value” already rests in the National Library of Spain (BNE) after the Brigade of Historical heritage has stopped their illicit departure from Spain.

This is recognized by the person in charge of making the bibliographic report of this work, José Luis Gonzalo Sánchez-Molero, dean of the Faculty of Documentation Sciences of the Complutense University, who at the beginning of the year had in his hands this book about which he thought that it would have been “burned or lost forever.”

“My research and my doctoral thesis were on the library of Felipe II and when they sent me the first images I saw that it was a copy of Felipe II being a prince, and I had never seen it because since the beginning of the 19th century its existence was not known, it was a book that was not located “, he explains.

But there was someone who had it, specifically a British citizen who wanted to get him illegally out of Spain, but thanks to a anonymous information received in the Brigade of Historical Patrimony of the National Police this exit was avoided and the British ended up donating it to the BNE.

Thus began a investigation process to know the true authorship of this manuscript with gold applications, dated around 1542-1546, and whose valuation around 2 million euros.

“It was known from documentary references that this specimen existed,” says the professor about this “Portulano Atlas” of Type 2, the so-called “post Californian”, because the California peninsula appears, which is missing in those of earlier types.

A work done by Battista Agnese (Circa 1500-1564), Genoa-born Italian cartographer who worked in Venice between 1536 and 1564 and became one of the most important figures in Renaissance cartography.

“From what I investigated It was bought by the Spanish ambassador in Venice, Diego Hurtado de Mendoza, to send it as a gift to Prince Felipe II, but it is not an atlas that Agnese copied on purpose, rather it is made with copies that she had already made in advance in order to satisfy the demands of her buyers, and she personalized one for Philip II “, explains the dean.

So, This is not one of your “most luxurious” maps., as is the one in the John Carter Brown Library (United States), dedicated exclusively to Felipe II, with a portrait of the prince and valued at 4 million euros. A specimen this one that is the “brother” of the new found and that “will never return to Spain”, regrets.

But to reach the conclusion that it was a true Agnese, Gonzalo went to the Simancas Archive, where there is a document with the item of expenses of the “wooden box” that was used to store the book sent by Hurtado de Mendoza from Venice. An amount that amounted to 272 maravedis, as recorded in the Prince’s Chamber Book (1547).

Since then, Agnese’s map remained in the Royal Library since its presence is detected in the Catalog of her Magesta’s books, an inventory of the works that the monarch still had in Madrid’s Alcázar Real, after having sent most of his personal library to the monastery of San Lorenzo de El Escorial.

And before in the nineteenth century he “lost his track”, the expert says that the latest information is in the binding, which is not the original from the 16th century, Rather, it was made in the 18th century by the bookbinder of Carlos IV, Gabriel Gómez Martín (1751-1818).

Such coincidences have allowed the dean to place this book in Madrid, and in the Royal Palace itself, or very close to the Court, at the end of the 18th or early 19th century.

“We are fortunate to know that it was a map of Agnese, because no one said it was, in all the documents it was stated that a cosmography book had been bought “, he clarifies about this issue that” opens many paths “and turns the BNE into” a cultural space “where with this there are already two maps of Agnese that has .

This is also stated to Efe from the National Library of Spain by Isabel Ruiz de Elvira Serra, its director of the Department of Manuscripts, Incunabula and Rare: “We are in luck.”

According to account, the atlas is “in good condition” and does not need any restoration workTherefore, it will be kept in the BNE vault, from where it will be ensured that this “cartographic jewel” “never leaves”, with the aim that it remains for the “posterity“Therefore, whoever wants to know these pages will have to do so through the Hispanic Digital Library.

Today, of the approximately 100 handwritten maps that Agnese created, about 70 are preserved around the world, either signed or attributed to her school.

Most, Ruiz de Elvira concludes, are in libraries, especially Italian ones, and there are “around” 10 or 12 still in private hands..