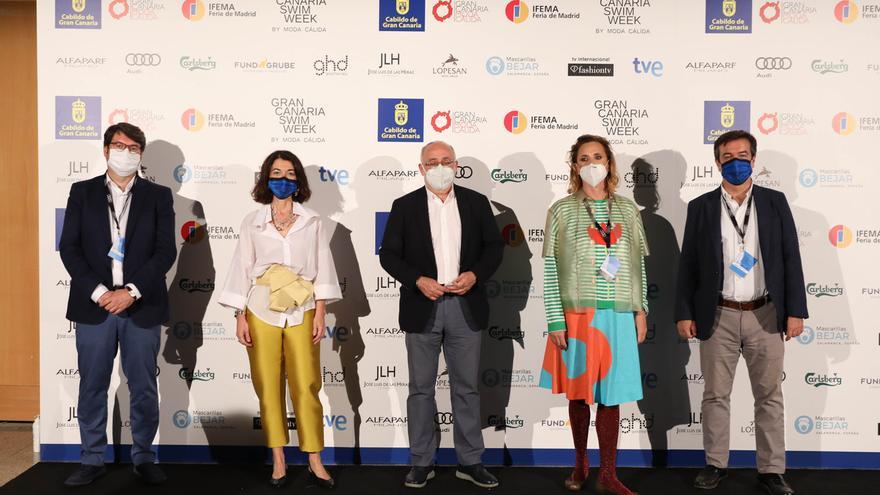 The elegance and sophistication of consecrated firms to which the explosion of colors of Agatha Ruiz de la Prada put the climax put the luxury finishing touch to the Bath Fashion Week of Gran Canaria on a day in which the self-confidence of the most children, who filled the morning with freshness and spontaneity with the Lady Bug, Fátima Rodríguez or Koku Kids collections, while in the afternoon Dolores Cortés, Én Emphasis, Arcadio Domínguez and Nuria González also did, who surprised with their proposals, characterized by this year for sustainable values, wide color ranges and pieces full of personality.

Enjoying the show in the front row was the exceptional ambassador of this 2020 edition, actress Paz Vega, who has been happy to support an event that serves as a showcase for the creations of so many local designers, as well as national and international designers, as well as talk with the president of the Cabildo de Gran Canaria, Antonio Morales, organizing institution together with Ifema of the event.

Also the top Canarian Ariadne Artiles, the creative director of Palomo Spain, Alejandro Gómez Palomo, the stylist and television collaborator Josie, the actress Marta Torné, or the top and opinion creator in social networks Nina Urgel, applauded the creations that this year They have been shown to a small audience, mainly professional, but which have been able to reach all corners of the world thanks to the live broadcast through the website of the catwalk.

The starting gun was given by Dolores Cortés, with a bet full of clean and precise silhouettes, elegant leathers and sophisticated patterns that give rise to pieces loaded with personality. The sailor stripes, a trend par excellence, have been revisited by the firm, as well as the floral elements, also present in the collection.

Como Un Pez en el Agua, meanwhile, opted for glam inspiration, a collection based on fabrics such as poplin with bamboo, tulle with piqué, or voilé with plumetti. The result, Glam Together, is a vital and optimistic collection, serving as a union of times and fashions. On the one hand, the ruffles that sculpt the feminine forms stand out, and on the other, the pieces in stretch cotton that adhere to the silhouette like a second skin.

Regarding the commitment of All Sisters, they highlighted the sustainable values ​​in a rich palette of colors. The firm presented a collection in which ecological fabrics created from recycled fishing nets predominated, giving rise to friendly designs with different female silhouettes. Mediterranean inspiration, key to the brand, is very present in its ‘retro-romantic’ bet.

The day continued with the double parade of the Canarian firms Arcadio Domínguez and Nuria González. The first opted for a collection of handmade crochet and lycra pieces. Romantic, warm and very feminine, these garments are combined with other relaxed and closer to urban style, such as t-shirts and sweatshirts, or more sophisticated pieces, such as a blazer or a cocktail dress.

Nuria González, for her part, took inspiration from Lady Tiger, a black woman, boxer and feminist who fought until she got her professional boxing permit in the United States. An icon of the struggle of women for equal rights. Lady Tiger 2021 is a collection full of shine.

All That She Loves showed a collection that is born from the most genuine craftsmanship, from ‘handmade’ and from the process that identifies ATSL: garment dyeing. The collection reflects delicacy and strength with hand-made knots and those energetic tints that turn the garment into an explosion of colors and sensations.

Approaching the end of the day, it was the turn of Palmas and Miss Bikini. The first presented a collection inspired by ‘glam’, in that culture imagined in the 80s that loses its fear of freedom of expression and wants to put aside what is feminine and masculine. While Miss Bikini unveiled a collection based on the crossbreeding between patterns and shades, shapes and colors, to instantly give life to a creative style with a strong visual impact.

Ágatha Ruiz de la Prada, who did not want to miss out on this very special edition, was in charge of the closing with a luxurious, luxurious bet. And it is that the sailor motifs that transport the sea and the sky, its characteristic applied flowers, the patchwork, the impossible giant bows or the iconic balloon swimsuit have had an exceptional protagonist: the fabric. And this is because the designer, one day before the confinement began, had fallen in love with some fabrics that the designer Jesús del Pozo put up for sale when he closed his workshop. He bought 15,000 meters that later served him to invent a collection that recycles what he already had, as a great champion that has always been of sustainability, but using wonderful fabrics that have led to his own luxurious pieces to go to a pool party , as soon as the situation allows it, to the beaches of Gran Canaria or any part of the planet.