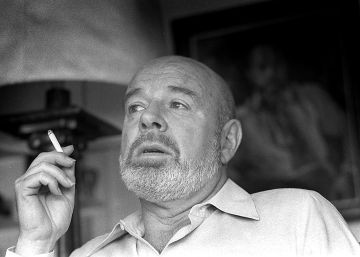 Seen in perspective, that of 1989 was a rare Christmas, a parenthesis between two deaths. December 12th, Carlos Barral's; weeks later, that of his friend Jaime Gil de Biedma. It was January 8, 1990, today 30 years ago. He was 60 and had published his last book of verses -Posthumous poems- in 1968, something that did not prevent him from being an influential and read author. What remains. To top it off, he had the courtesy of writing little. His complete poetry, which fits in a 200-page volume, is full of memorable moments that have the most stark confidence tone and, at the same time, the most intelligent conversation.

No one has reflected like him about love and sex, bad class conscience and the memory of a child of war - “the happiest years of my life / and it's not strange, since after all / I didn't have the ten ”-, the Barcelona of the bourgeoisie and that of the Murcians of emigration. "That the city belongs to them one day," he said, thinking of them as he had said that "of all the stories in history / the saddest is undoubtedly that of Spain / because it ends badly." That the phrase has become a topic demonstrates the strength of his findings, that he placed it in the most difficult stanza of all - the sextine - certifies his mastery of a trade with which he never earned bread (nor caviar): his work as executive in the General Tobacco Company of the Philippines it occupies a good part of its Portrait of the artist in 1956, newspapers that were completed posthumously with a commercial report written as high literature and with fragments that related their controversial pedophile scars on a trip to Manila.

Gil de Biedma always recognized his debt to Luis Cernuda and, in a certain sense, completed the task initiated by him: introducing into Spanish poetry - long paid to French influence - the narrative and meditative modes of Anglo-Saxon poetry. Say, those of Auden and the Eliot of Four quartets (more than The wasteland). Like the two of them, he was also a huge prose: sharp, bright, hurtful. When he wrote in favor it was good; Let's not say when I wrote against.

If Gabriel Ferrater said that with the same defects but with fewer qualities it would have worked better, Juan Ramón Jiménez described him - for his attacks on other writers, curiously - as “mean and malicious casino lord of the town of Huelva”. Shortly before I had pointed out that the voice that speaks in JRJ's books "is always in favor of one's emotions." His — a different form of coquetry — was always against him. That's why he wrote 55 memorable titled verses Against Jaime Gil de Biedma: "If you weren't such a whore!" They were the times when I still wanted to be a poet, then rectified: I preferred to be a poem. He got it. He died 30 years ago and nobody has forgotten him.