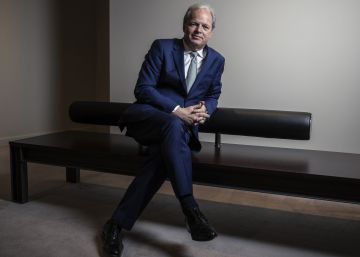 Chilean streets they started burning in October, taken by citizens who demanded a frontal fight against social injustice. In Colombia the protests began later and deepened the gap between the Government and the youth. And in Ecuador, the wick was lit by the rising cost of fuel, but ended up dragging Disenchanted sectors with fiscal adjustments to be able to reinvigorate the public accounts of a treasury in serious trouble. With Latin America boiling, A question flies over: is inequality the only cause of these mobilizations? Axel van Trotsenburg, managing director of Operations of the World Bank and until three months ago vice president of the agency for the subcontinent, denies the major. "It is only one factor of many," he says in conversation with EL PAÍS. "Behind the protests there are people who feel excluded from the future." Visiting Madrid to participate in the COP25, he number two The multilateral also warns of the "many inconsistencies" of some countries on the climate level – although unspecified: it avoids all puddles in their responses – and the rise in "eco-whitening practices". "There," says Trotsenburg, "many people claiming as green investments that really aren't."

Answer. He is one of the biggest, no doubt. But things look differently depending on the place. As Europeans, I would say that it is the biggest challenge, but I think we have to be fair: for countries that have just emerged from a civil war, climate change is not in their mind.

P. We are in a phase of constant technological evolution, but without apparent revenue on the productivity. Why?

R. There is much discussion about whether it is a measurement problem … Are we correctly capturing the effect of technological change? I think we have to focus on this issue and try to anticipate the effects of digitalization on employment: There are many people entering the labor market at a later age than their parents and knowing that their pensions are not insured. It is a topic on which to focus the debate.

P. Is there a real risk of reversal in the path of poverty reduction in recent decades? In Latin America it is already happening …

R. We have made great progress in eradicating extreme poverty, measured as people who enter less than $ 1.9 a day. Many societies have left that behind, but there are still 800 million people, almost 10% of the world's population, below that threshold. That is the global reality: if we look at countries individually, we see reversals, closely related to economic growth. In Latin America, the case of Venezuela, which has gone from being among the richest in the region to having 90% of its citizens in poverty. AND Argentina, which has four years of reversal in the trajectory of reduction and today has a third of its citizens below that threshold. In Asia, the trajectory is much better, especially because of the greater economic growth.

P. What is the relationship between climate change and poverty?

P. If not faced correctly, the increase in extreme famine will be significant. ANDespecially in the most fragile states.

P. What is "significant"?

P. Inequality is today a much more recurring topic of debate than a few decades ago. But we remain anchored to Gini coefficient almost as the only form of measurement … Is it a mistake?

R. Like GDP, the Gini index of a single data set. And yes, it is insufficient: we have to look further: human development and equal opportunities, measured as the capacity of a society to give the same starting position to all children. The question we must ask ourselves is: are we creating truly inclusive societies? Are institutions a factor of inclusion or exclusion? And the legal system?

R. Mexico has a clear long-term challenge: productivity. And another, of internal differences: the south remains underdeveloped and that is where more work needs to be done, both from the point of view of competitiveness and from the social point of view.

P. Around the world, and very particularly in Latin America, economic debates remain anchored in the short term.

R. I think a long-term look in the region would be very powerful. Thinking 20 years before gives the possibility of formulating ambitious and structural policies. That vision, however, remains sparse. In part, due to factors that continue to weigh in Latin America, such as the recurrence of economic crises, which make the natural tendency to think in the short term. It is rational, but the World Bank would not be the World Bank if it did not push towards a broader vision over time.

P. Does the social explosion in several Latin American countries, such as Chile or Colombia, explain inequality?

R. Inequality is not the only factor: it is one of many. In fact, it also affects other countries outside the region: Tunisia, Sudan… The interesting thing is that who is behind the protests in Latin America are the middle and lower-middle classes, not the poorest: they are people who feel excluded from the future. And that is something that has to be better understood from a political economy perspective.