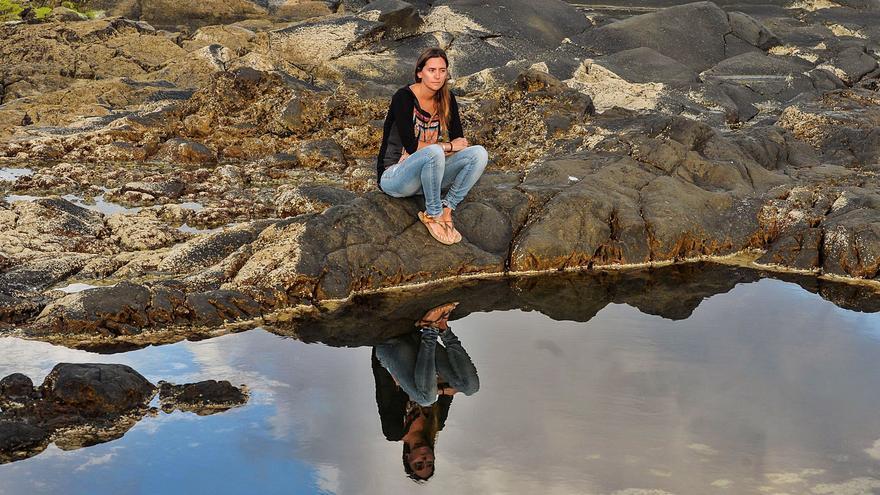 This story that Rosa Elena Brito recalls from La Gomera and Tenerife at 66 in the documentary Women of salt, men of smoke, by the Gran Canaria Iris Carballo Déniz, is one of many stories from Gran Canaria, La Gomera and Tenerife that memory and the macho society have buried for decades ignoring those women who in years of migrations were abandoned by their husbands in the Canary Islands, alone, singled out and without help, experiencing the emotional, political and economic consequences of male emigration.

Here they had to move forward with their family, always suspecting the reasons behind their husbands' non-return: perhaps abandonment; maybe a shipwreck; perhaps a new family in destiny ... With those doubts they lived in silence without really knowing the truth.

Today, with the work of Iris Carballo, those island women, called white widows, are finally given a voice because in their uncertainty they could never wear black since they did not know the fate of those who left them abandoned and in charge of their descendants.

During a trip to Cuba, Iris meets by chance the grandson of an emigrant who had discovered, after the death of his grandfather, that he had left another family in Gran Canaria that he had never heard of. Thus, she begins an investigation in the Canary Islands about those women and, scrutinizing those memories, she intends to give those mothers their own voice in history, a voice that until now had remained silent or locked in family intimacy. Next, he returns to Cuba to inquire about the causes of the emigrant's non-return to the islands, seeking answers to the most frequent question on the other shore: Why did he not return? A whole chain of events that seemed to have no connection, makes Iris Carballo Déniz discover that her own story fits together with the others as one more piece.

"Traditionally, studies on migratory phenomena focus their analysis on the role that men play in this action, leaving women totally invisible and out of the role of history," explains Carballo Déniz. “However, the emigration of men left a deep mark on the environment in which women stayed. They left for both economic and political reasons and they remained emotionally and socioeconomically anchored to that absent husband, seeking survival strategies to get the family out of the way, trapped, too, “under moral pressure. Through the micro-stories rescued through oral history, we can observe the consequences that migrations cause in the family context of origin ”, says the young woman.

Studies on the role of women in the migratory phenomenon are quite scarce, so a continuous reading between the lines facilitated the path of Iris and her team -Luis Santana Déniz signs the script with her- to these oral rescues and favors knowledge and research on the effects that emigration had on Canarian women. The difficulties of getting ahead increased everywhere, whether you were married, single, or widowed.

The value of the investigation undertaken by Carballo is precisely to have located the descendants of those women, as is the case of Bernarda Pîtti Falcón, 73, who remembers from Arucas how her grandmother «paid the passage to her grandfather so that he could go to Cuba, leaving his grandmother with five daughters and a son. She sewed at night, and in the morning she worked in the service. His daughters worked in the houses of rich people in exchange for food, often being harassed by the men of the house they served. Divorce was illegal and she could never rebuild her life even though she liked another man. Nor could she sell any property without permission from the absent husband.

Women of salt, men of smoke also recovers the departure to Cuba of the grandfather of Ana María Martínez Hernández, who today is 83 years old and resides in La Orotava. After the man's departure, his grandmother was forced “to work multiple jobs to raise her two children, from shroud, to midwife, head of a bakery and laborer. The first seven years ”, she recalls in Women of Salt, Men of Smoke,“ she receives letters from her husband, the next eight do not. With the absence of this, she becomes increasingly sour. Fifteen years later, her husband returns. She accepts it, although her children are not very satisfied. Soon she becomes pregnant again with two other children. She wanted to show off her husband so that the neighborhood would see her with him, but he never wanted to go out.

The Women of Salt initiative began to be developed as a research project at the end of 2015 and in its first phase it focused on the rescue of stories on the island of Gran Canaria, with the aim of giving a voice to the women who stayed in the Canary Islands. waiting for the migrant who never returned.

In this first phase, we worked with three associations: the group of oral narrators Los Labrantes de La Palabra, the Arucas Senior Center and the Auaritas Women's Association. In addition, street work was also done with people linked to the issue.

«From the beginning of this research work, oral narration was prioritized over written history, and special emphasis was also placed on discovering the poems, songs, romances and other types of artistic cultural expressions that emerged from the experiences of emigration. This information », says Iris Caraballo,« is of great relevance at this time when the research project has become an audiovisual project, since there is a large amount of tangible material and contacts that express from an emotional and creative place the history, giving rise to the possibility of an audiovisual creation that is entertaining, inspiring and educational at the same time ”.

In March 2016, the investigation process continued on the island of Cuba, this time collecting accounts of the causes of no return.

This project was supported by the General Directorate of Historical Heritage of the Government of the Canary Islands. During the month of stay in Cuba, 50 descendants of Canaries were interviewed and different activities of reflection and awareness were carried out on the consequences that emigration had for the woman who remained in the Canary Islands while waiting for the emigrant.

The stories that Iris Carballo collects in Women of salt, men of smoke are back and forth. As is the case of Eladio Pérez Oliva, 55, who speaks from Cuba for this audiovisual work. When his grandfather dies, Eladio begins to investigate his family "and discovers that his grandfather left his family in the Canary Islands and did not have contact with them again." Eladio nowadays conducts a deep investigation to discover the roots of his ancestors and complete the genealogical tree that he feels has to end as a spiritual task following the legacy of his grandfather before that salt and smoke that give the documentary its title dissipate the truth of its history.