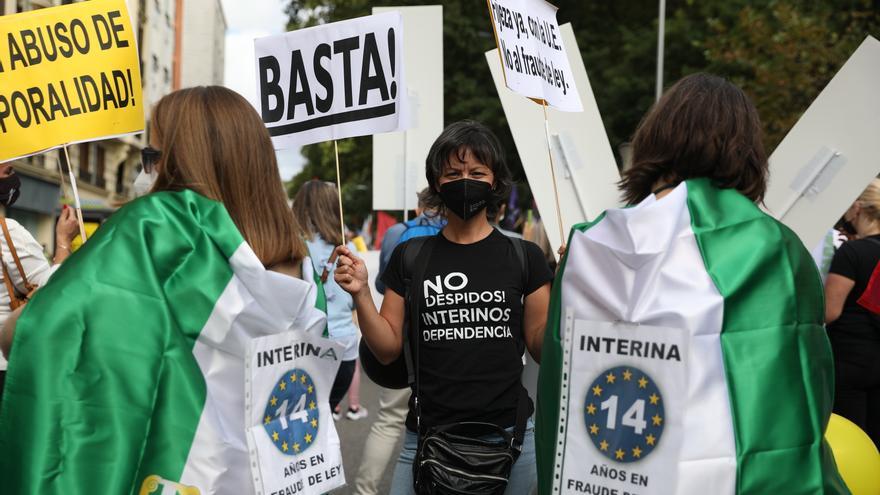 Hundreds of people have marched through Madrid this Saturday to protest the Decree Law of Urgent Measures to Reduce Temporality in public employment, which is currently being processed, and with which the Government intends put an end to temporary abuse of interns. Coming from various parts of Spain, the protesters have demanded that they be fixed in their jobs, where they have been for years and even decades.

Elena Romero is 63 years old and has been working since 2015 for the Ministry of Family, Youth and Social Policy of the Community of Madrid. In any private company they should have made it indefinite by the third year, but in the public company the same is not the case. “It is required of the private sector, but the public does not comply,” denounces this architect, who refers, like many of the attendees, to the European directive 1999/70 / CE, which was already talking about reducing the temporality in 1999. “The EU has already slapped Spain on the wrist and we are 20 years behind schedule”, explains who considers that “the one who has broken the law is the administration and those who are going to pay” are going to be them, seeing that their jobs are in danger. working with what they call the “icetazo”.

In Spain, the public sector has a temporary employment rate higher than 28%, with nearly 300,000 public places occupied by temporary workers that are actually structural, according to government calculations. To tackle this problem, the Executive, with the then minister Miquel Iceta at the head of the Public Service portfolio, reached an agreement in the summer with the majority unions, UGT, CCOO and CSIF. The decree law that is being processed contemplates that these places are fixed before December 31, 2024 and that the interim period be reduced to 8%. The process will affect all structural positions occupied temporarily and without interruption at least in the three years prior to 2020.

But in order to qualify for these positions, interns in temporary abuse must approve a new opposition in which, for the first time in the history of public job offers, the experience acquired in the position will be valued up to 40% of the computation. global. It is a measure that does not satisfy public sector employees who have been in a structural job for years but with the insecurity that comes from not having a permanent job. “After 16 years, they ask me to show merit and ability,” denounces José Luis González, who has been working for the Almería deputation all this time.

From that province, a group of temporary workers from different administrations have arrived in Madrid to demand “as victims of abuse, that the law be complied with.” “The European Justice says that when a worker has been abused (occupying a structural position with a temporary contract for more than three years) the sanction is essential, which can be economic to repair the victim – it is terminated and paid – or through the stabilization of the worker “, explains González. And the latter is what they demand: that all temporary workers who have been in any public administration for more than three years without going through an open opposition process be made permanent.

“They can’t ask me for a triple shift”

Because their fear, indicate the interim with whom elDiario.es has spoken, is to be left out of the process in the first phase of the opposition, where the merits are not counted. In addition, they claim to be at a disadvantage compared to young applicants or just out of university. “The opposition phase is eliminatory and we cannot compete with young people. I work, I have two adolescent children and I cannot study a 100% opposition. They cannot ask me for a triple shift,” explains Laura Requena, 51 years old and who has been in the assessment service for the dependency of the Junta de Andalucía for 14 years. “We have already entered through a legal process, through an opposition contest, through a job bank …”, he defends.

In her case, she does not require being a civil servant, but “keeping” her job. This is also explained by Olga Pérez and María Pilar Ramírez, who have arrived at the demonstration from Aragon with a group of about 150 interim from different administrations in the region and summarize the three options they have on the table: to be fixed after the three years, that they make you fixed to extinguish -which implies that you are not a civil servant- or that an extraordinary merit contest be held restricted to these workers. Like all attendees, they rule out that this stabilization process is open because “they are not in accordance with reality” and they have already “entered the public service.” “We have to study, but many other things to be competitive in our work”, where they have been for 17 years, “and not an opposition” that does not respond to the “super specific” work that they have been doing for years in the agronomic sector.

“I work in a very specialized service and the one who teaches everything to new people who arrive is me and now they are going to throw me out on the street,” regrets Ana, who has been working at the Hospital la Fe in Valencia for 22 years, where she has not obtained still a fixed place because the tests “value other things” that have little to do with professionalism. In the demonstration that left Atocha and reached Calle Alcalá, passing the Congress of Deputies, he met Juana Rico, who works in the same hospital. “At my age (53 years), I no longer have the ability to memorize laws like a young man who has just left university, but I have the experience gained from years of work,” he says. In addition, he points out that after the pandemic they feel “very burned” and that they deserve “respect for work, effort and dedication” instead of “losing their job.”

For interns in temporary abuse who do not get a definitive place in these stabilization processes, the Public Function had agreed to an economic compensation of 20 days per year worked, in line with the amount recognized by the Supreme Court for temporary public employees (labor) in fraud to those who recognize the status of indefinite non-fixed. Some compensation would come from the state coffers and that the interns with whom elDiario.es has spoken would be better invested in strengthening public services than in throwing them out of their jobs, while making them permanent would mean “zero cost”.

In any case, the protesters ask that they not be confronted with the new opponents who want to apply for a public job for the first time. “Our problem is not contrary to yours. There are plenty of places because colleagues do not stop retiring,” explains José Luis, who denounces that oppositions continue to be called with abused workers. “On the one hand, that there be free oppositions and, on the other, stabilizations,” he claims.

The march has been called and supported by dozens of unions and minority worker associations, who have regretted that the majority, CCOO, UGT and CSIF have adhered to the Government text, which was approved in extremis in early July with the support of ERC and before the doubts of United We Can, which managed to have it processed as a bill to be able to introduce amendments and negotiate, for example, that the tests are not eliminatory and make fixed the temporary ones that have been in their position for more than 10 years. However, one of the moments where the boos and the whistles have been most felt has been when passing in front of the CCOO headquarters, where the protesters have accused the union of “traitor” for being on the side “of the employers.” “We do not understand how organizations in defense of workers are against the interests of public sector workers,” lamented Pérez, who calls for “political will” to resolve the conflict because “this law does not solve the problem.”