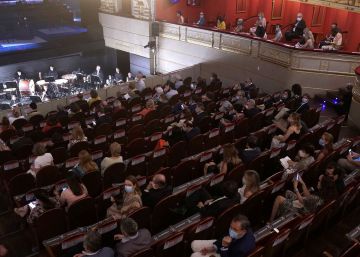 The lovers meet again and stand still, as if overwhelmed by a mutual astonishment, to see again with their own eyes what they had failed to remember, the resplendent novelty of the presence of the other, the changes brought about by absence: they remain standing, in the room where she just got up from the unmade bed, but after that moment they don’t advance towards each other, they don’t break the last section of the distance that had been separating them. They look at each other, talk to each other, extend their arms, but the fingers do not touch each other, as if the other irreversible distance that will soon separate them has already been imposed in advance between them, an abyss that they cannot cross. The two lovers, Alfredo and Violetta, meet after a bitter separation in the last scene of the third act of La Traviata, but, although they want each other so much, they do not embrace each other because they are already separated by the divide of death, and because health precautions against covid-19 They don’t allow singers to get closer to each other within two meters. The members of the choir and the extras are also strangely separated from each other, in a kind of ghostly grid, and the spectators that a moment later, after the end of the performance, we will stand up to applaud, uniformed in the anonymity of the masks, which are another health precaution, but which end up being part of the general wardrobe and the scenery of the opera.

Shrouded in masks and separated from each other by the red adhesive lines that mark the distance, the members of the choir entered the stage, as soon as the winding prelude ended. It soon became apparent that the masks, rather than a forced and annoying addition, were an aesthetic feature of the performance, such as the dark suits and bow ties and conical carnival caps that would appear later. All those severe silhouettes, dark in the half-light, more like a funeral than a worldly party, were as still as statues, and a moment later, in a more shocking gesture because it was dry and unanimous, they took off their masks, being sure of the social distance: a simple practical fact turned into choreography.

Live music, like a high-quality alcoholic beverage, has a more powerful effect after a long deprivation. Listening to the music while it is being performed in front of you is like looking at a painting after having resigned yourself to digital reproductions. The prelude to La Traviata It was the first music present to reach my ears after the months of confinement. When the orchestra explodes in all its sonority, when a naked human voice floods the concave space of a great theater, the music strikes one with its physical shudder, and as the deprivation took away the habit, the increased effect overwhelms it, and the emotion of other times is now more primary, like a wave of fervor or misfortune.

The Verdi fan, and even more so La Traviata, knows that the sentimental effusions that oppress the throat and can unleash tears are part of the aesthetic experience in the same measure as the perception of the mastery of music. But in the applause that never seemed to end the night of the premiere, on July 1, there was more than recognition for an admirable work of musicians, singers, set designers, and for a familiar and beloved masterpiece. On our feet, scattered around the seats and through the boxes, with our masks on, we applauded with some of the gratitude and brotherhood with which we had applauded the restrooms for two months, with the excitement of the return of part of life that we have been able to recover, with the relief of having survived, with the sorrow for all the dead; and also with a heightened sensitivity towards the suffering and fear of the sick, which is precisely the axis of this opera: the libretto of La Traviata it follows the sequence of a clinical case, that of a very young woman suffering from an incurable contagious disease.

But the applause also recognized the merit of an aesthetic decision: that of lifting an opera performance not despite the limitations imposed by economic hardship and health emergency, but taking advantage of them, turning them around to turn them into advantages. There are ostentatious, or privileged, or baroque artists, who rejoice in overabundance and waste, who only work if they are given carte blanche and a blank check is signed; singers who can effortlessly reach the highest notes and thunder a stadium; virtuosos who dazzle with an ease that many find admirable because they confuse it with conjuring or pyrotechnics. There are architects who travel the world by private plane or first class leaving a trail of expensive and equal buildings, whether they are in an emirate of the desert or on a misty Baltic shore, and stage managers who sign montages as expensive as buildings, although even more ephemeral.

I do not deny that there can be beauty in the overabundance: but I have seen many times, and not only in architecture and in opera, the obscenity of waste, gimmicky Baroqueism as a wrapping of nothing. Maybe that’s why I appreciated and admired more the contention in the assembly of this Traviata of post-confinement. In the almost naked scene, the presences and the voices became more intense. The austerity of the budget and sanitary measures prohibited the already habitual proliferation of figures and stage effects and gave each figure, each projected shadow, the value of a revelation. That Alfredo and Violetta, being so close to each other, could not hug each other gave the singers and actors an almost abstract gesture like that of a Japanese theater. La Traviata It was not a routine monument to opera programs, a classic out of time, made of definitive and unfriendly bronze or marble, but a work from when it was released and from now on, austere and necessary, with the urgency that is always in the core of art: that’s why in the end there didn’t seem to be a separation between the stage and the room: on one side and on the other we all applauded with the same vehemence, and we were figurants and spectators in a Verdi opera and in the drama of a reality that has not stopped being threatening.