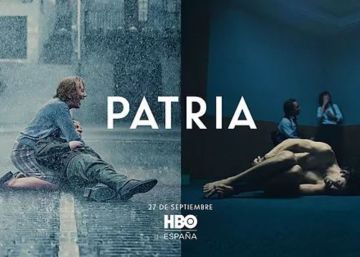 An image. To one side, a woman hugs the body of a man in what seems like the moments immediately after an attack. On the other side, a man lies naked in an interrogation room in the presence of members of the police. A slogan: We are all part of this story. It didn’t take more to set social media on fire last week. The advertising poster, which corresponds to Homeland, a fiction series that will hit the HBO streaming platform at the end of the month and which is based on the successful novel of the same name by Fernando Aramburu, soon generated opinions almost as conflicting as the two scenes it contains. On the one hand, those who think that it is a frivolous comparison of victims with executioners; on the other, those who believe that it is worth opening the public debate to issues such as police abuses suffered by people who did not always belong to the terrorist group ETA.

In the middle, a production that is on everyone’s lips and that even forced Aramburu himself to come to the fore, to begin with, who judged that the poster does not fit the tone of his novel or that of the series, where it is not leaves room for equidistance. Fernando Grande-Marlaska, current Minister of the Interior and one of the judges who fought the most in Spain for the disappearance of the terrorist gang, has also had to make a pronouncement, which made him one of his main objectives for years: “With this issue there is no room false equidistance and yes the defense of the dignity of the victims, “he told the Efe news agency last Thursday.

If there is one person in Spain who can understand what is happening, it is Raquel Martínez, creative director of the McCann advertising agency. Together with her team, a few months ago she was in charge of shaping the advertising campaign of The invisible line, a series that addresses precisely the origins of ETA and that recently premiered on Movistar +. “We knew it was a very sensitive issue. When you watch the show, you may be tempted to think that they were just young guys whose ideas got out of hand. But we have all the context, everything that happened after”. Therefore, she explains, they chose the slogan. When ETA learned to kill, which, they understood, gave no place to understand that they were impartial.

This has not been the case with the HBO series, a production company that had not stood out until now precisely for fueling the controversy. Yes, Netflix usually does it, a machine to generate discussions. If four years ago the platform already angered a good part of the Latin community living in Spain by wallpapering the center of cities like Madrid with a play on words that alluded to cocaine to promote Narcos, a couple of weeks ago he did not stay very far when advertising Beautiful, a series that deals with adolescent conflicts in times of social networks and the cult of the image, with a still of underage girls dancing with little clothes. Although the company apologized and withdrew the campaign, the voices accusing Netflix of encouraging pedophilia have yet to cease.

At the bottom of all the noise, experts explain, beats fierce competition in the entertainment industry and the need to stand out from the rest. “If before an ad had 20 seconds on television to attract attention, now it has one, how long it takes for the user to click and cancel it ”, explains Martínez. Even so, they clarify, not everything goes. “Brands want notoriety, but they also want to convey a positive message. It is preferable that few speak well of a company than that there is an army of people speaking badly ”, explains Javier Senovilla, creative director of the Ogilvy agency. Martínez agrees: “I am the first who is in favor of the campaigns having a controversial point, that they amuse and make people think. At McCan, with the Campofrío ads, we opened a few melons. But a campaign that can end up in court will never be good. “