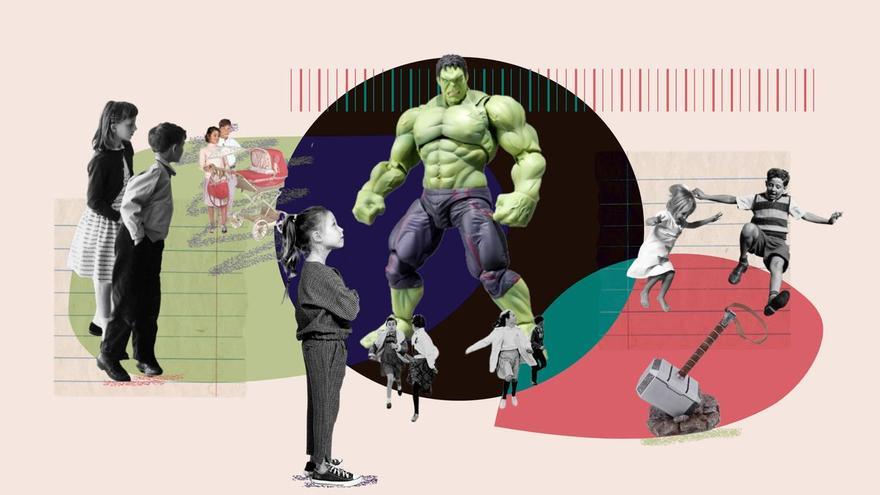 An angelic voice invites you to enter a "magical world" to give the bottle and change the diaper of a baby, then a guttural booming voice screams a car competition. Muscled superheroes, sexualized dolls, makeup games, gun fights... Anyone who looks at television one Sunday morning will find that advertising directed at children still draws, well into the 21st century, a world sexist, compartmentalized and riddled with stereotypes.

Good girls who take care of, brave boys who fight. A pink world, small and segregated for them; the rest of the color palette and all the spaces in the universe for them. The world fights to advance towards equality, but toy advertising is determined to remain anchored in the past.

"Things have gotten worse. Beyond pink and blue, there are many divisive strategies that target audiences with no ability to filter or choose. It is a very segmented industry, toys and games are absolutely differentiated in diametrically opposite poles: many of those that are for girls use diminutives - tummy, stroller, witch, wardrobe, puppy ...-, all tiny, passive and dedicated to glamor and fashion. Children's names use superlative names -mega, ultra, super, hot-, they are active and ultra-fast ", explains to El Periódico de España communication and gender expert Yolanda Domínguez.

"A UN Women study says that girls at age 6 are already considered less valuable that children and here advertising has a responsibility to reproduce these stereotypes: a girl always slow, passive, sitting, ... They are teaching that in the future others make decisions for them. It is political to offer a world in which women remain second-class citizens and this has been done since childhood ", highlights the professor of Audiovisual Communication and Advertising at the University of Burgos, María Isabel Menéndez.

The university professor asserts that children's advertising "insists on creating a excluded and exclusive female subculture for girls, a pink world ", while for boys it has" the green of the jungle, the blue of the ocean, the black of the universe, they have all the colors ", a metaphor for how they insist on creating two separate spheres, but not the same, because the girls' is much more limited.

"If we see the spots, they can be the same as those of a long time ago. There are not necessarily people with hostile ideas to equality behind these ads and these toys, but the feeling that the responsibility always belongs to others. I have a company , I sell the products very well and I do not consider the need to change because it involves a very great effort, "says Menéndez.

Domínguez alerts that every year sexist advertising techniques become more sophisticated, which are reaching the point of sexualizing not only dolls, but baby dolls.

"Segmentation helps the sale, not only the sale of today but tomorrow. It is not that we have advanced, it is that we are getting worse. Then they believe that integration is to put the same toy in pink and blue, that's differentiation", says the expert. The key is not to offer differentiated toys.

Domínguez describes initiatives such as creating a Barbie range of various models of women or an astronaut figure as a "pose": "Where is that barbie to be found? Because you go to the toy store and it is not there, you see the catalog and it is not there, is for watch your back. She is not accessible or promoted to the same level as the blonde who does makeup and comb her hair. "

The Institute for Women analyzes in the study "Advertising and Christmas toy campaigns: promotion or breaking of stereotypes and gender roles?" the existence of sexism in advertisements aimed at children. The result of the research is not surprising: 60% of television advertisements show girls as flirtatious, caregivers, mothers or wives, compared to 9% in which boys assume a caregiver role. Only in 3.7% are they heroines or warriors.

However, they are warriors (33%), heroes (22%) and adventurers (15.6%). Discrimination and segregation that is also detected in the projection of professions: advertising persists in keeping girls away from science and technologyIn 60% of the ads aimed at girls, electronic and mechanical devices are conspicuous by their absence, a percentage that drops to 26% among those designed for boys.

Professor María Isabel Menéndez, one of the authors of this study, emphasizes that advertising shows a woman who no longer exists, with traditional roles far from power: "Women are in employment, in politics, they make their decisions, they do not ask their husbands what they are going to do."

"There are no roles for girls who have a position of power," says Domínguez.

Toys for boys stimulate creativity and intellect and those for girls depict a world much more limited to care and physical appearance.

They appear taller or bigger than they in advertisements and occupy a pre-eminent position, according to this study, which stands out that they appear in front of them twice as often as vice versa. This idea of ​​authority it is enhanced by the voices that the commercials announce: female voices are infantilized and use diminutives and soft melodies, theirs are guttural and powerful and resort to augmentatives and strident music.

Furthermore, the relationships between characters that appear in advertisements also differ: while the little girls interact with each other, they star in many advertisements alone, without interaction or with unfriendly or rivalry relationships: competitiveness prevails, not cooperation.

Small ones are relegated in these ads to domestic and closed spaces and for them, the universe and public spaces.

Domínguez emphasizes that what is offered is as important as what is not found in the corridors of toy stores. "Children do not have access to toys that allow them develop dialogue, empathy or care; It is all combat and action without any type of dialogue in between that helps to understand, speak, socialize. Everything is to kill, annihilate and destroy. And for girls, the other way around, they don't have toys to help them develop professions beyond hairdressers, nurses or doctors. "

The experts emphasize the educating and socializing role of advertising, to which is added the importance of the toy to carry out a vicarious learning: "Children learn to be older with games and toys and they are being told what to choose and how to use it," emphasizes Méndez.

Play is theater, experimentation that helps to internalize social norms.

"It is very important because through toys we can develop certain skills and if we do not practice them, we will not be good at them. (...) The brain is a plastic and moldable organ that changes throughout life depending on the activities we practice, if a certain behavior is attributed to a sexIt is going to develop these areas further, "says Domínguez.

Advertising costumes and toys for children.

The sexualization of girls in advertising "is a serious problem, a clear violation of the rights of girls and a detriment to their full development as individuals," asserts this body dependent on the Institute of Women.

By putting sexuality at the center, the other qualities and capacities of women and girls are undervalued and ignored, and fostering these stereotypes of sexualization and beauty as a measure of social success lowers their life expectations.

"Early sexualization it is a form of violence against girls that is being normalized ", highlights the Observatory, which also warns that its negative influence on self-esteem can lead to eating disorders and an increase in the possibility of aggressive and abusive behaviors towards young girls.

A Guide for Parents

Against this background, the Minister of Consumer Affairs, Alberto Garzón, acknowledged a few days ago that "the rules are clearly obsolete, insufficient", since advertising conveys values ​​for the conformation of identity and the development of the person:" In advertising there are sexist behaviors that have to be eradicated, that promote machismo. (...) They are aimed at a particularly vulnerable audience, boys and girls, at an early age there are no defense mechanisms ".

Consumption prepares a guide, precisely elaborated by Yolanda Domínguez, to inform families of the damages of being uncritically carried away by advertising loaded with stereotypes.

"One of the keys is find the balance of the toy basket. Just as we are looking for a balanced food basket, we must think that games and toys are a way of nurturing the capacities, possibilities and social development of boys and girls ", defends Domínguez.

Without a doubt, families are an area that can be activated to detect sexism, but Domínguez speaks of a regulation of the toy industry: "In any sector, if there is a practice that harms people, it must be improved. greater power is the industry because people do not always know how to identify all these gender biases ", concludes the expert.