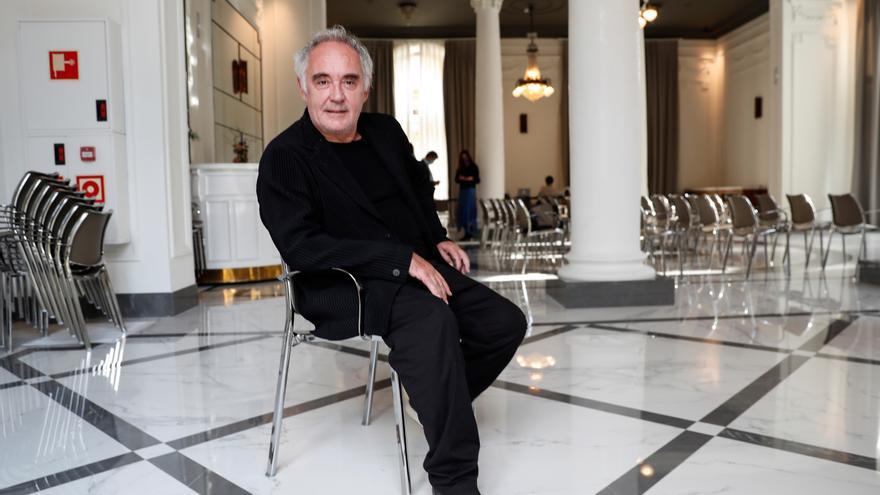 San Sebastián, Sep 20 (EFE) .- ElBulli closed ten years ago, with which it established the freedom for each chef to do “whatever he wanted”, the cycle dedicated to research and innovation is about to end. and Ferran Adrià recognizes that he needs new challenges, like helping a cook to fulfill her dream.

“I would like to find a woman who wants to start a restaurant and that I help her, a little like in ‘Ratatouille'”, says Adrià with humor in reference to the well-known animated film.

It would not be his restaurant, but hers, who would have to decide what type of establishment. “I’m still young, I have to challenge myself,” says the chef who jokes about the number of girls who will offer him ideas when his intention is known.

It is just one of his projects once the current cycle is closed, another of those challenges that keep him active, and which is called elbulli1846.

And he lists: “The exhibition center (located where the restaurant was, in Cala Montjoi) will be finished in 2023 and next year we will open by invitation; the Bullipedia in 2023 will have 30 books that are doctoral theses, and there will be 4-5 books on innovation”.

“We will have finished a cycle that will have been longer than we expected,” he says, and he will look for another “aubergine” like this one to get involved in, because he needs risks, challenges and passion, at the level of when they created culinary avant-garde at elBulli.

Relaxed, smiling and close, Adrià speaks with EFE hours before presenting at the San Sebastián Festival the documentary “The footprints of elBulli”, which opens the Culinary section of the San Sebastian contest and which will premiere on Movistar + on October 10.

Andoni Luis Aduriz, Juan Mari Arzak, René Redzepi and José Andrés pass through the documentary. Everyone immediately agreed to participate in the documentary, because if it is for Adrià, whatever it is, they will recognize EFE José Larraza and Iñigo Ruiz, the directors.

They show as much admiration for the Catalan chef as all their colleagues and admit that they were astonished to discover to what extent elBulli has influenced the dishes that many restaurants use.

But Adrià insists that the most important part of elBulli’s legacy is freedom, which he transmitted to all those who were trained in the restaurant.

The staff was renewed by 80 percent every six months, taking advantage of the annual closure, which brought in 2,500 chefs, who are now 80 percent of the most influential names in Western cuisine. “They are children of elBulli, like me, I am one more, the most important but one more,” says Adrià.

This can be seen in the documentary, in which Adrià teaches the young cooks who participate in his innovation project, and he does so from the most absolute freedom to make them believe.

“We were pioneers and we were surely not aware of the importance that it was going to have later,” acknowledges the chef, who marks the turning points in his career in the Cooking and Science course that they did with Harvard University (USA). ) and then everyone imitated, and on the legendary 2003 cover of The New York Times Magazine.

But at the time it was hard to tell. That is why this documentary, with a 10-year perspective of the closure of elBulli, allows us to see that influence in the long term.

“What we do is de-monopolize this and say, gentlemen, ladies, think, reflect and do what you want. This seems very simple, this degree of freedom, this hymn to freedom, reaches Mexico, Peru , to Venezuela, Argentina, the United States, Norway, Portugal …, to countries where there was a traditional cuisine of the country and French culinary art, as in Spain “.

From elBulli he changed the paradigm of gastronomy and affirms it without false modesty. All of this has made it possible to improve the kitchen and to develop a whole generation that would not have existed. And even Masterchef, he says.

From that stage he jumped to his project of an exhibition center and the Bulli Foundation, which aims to preserve the legacy of elBulli, create quality content for the profession through Bullipedia, and share experience in innovation, administration and management.

But what he emphasizes the most is improving the quality of the kitchen. “You have never eaten so well in Spain and I discuss this with anyone,” he says vehemently, before noting that for now a new gastronomic revolution is not needed and that this is the best generation of cooks that has ever existed.

And although he says emphatically that “the pandemic has been a huge host for everyone,” he believes that the recovery is underway. It has also served to teach that from the simplest bars to the highest level restaurants, they are the “essential places to socialize and that is brutal”.

“The most important social network in the world is not Facebook, it is food”, and we must put aside the debate about the creative and the traditional, because what matters is quality.

Although yes, the avant-garde, like that of elBulli, is something else. And there they arrive 7, 8, at most 10 restaurants in the world. “They are all creative but the vanguard are those who make their way in the army and usually kill them all.”