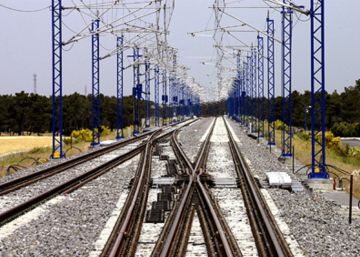 Adif and Adif High Speed ​​(Adif AV), Public companies in charge of managing railway infrastructure and stations, recorded aggregate net losses of 134 million euros in the first half of 2019, 2% higher than those recorded in the same period of the previous year, and above the 74 million euros that he lost throughout 2018.

The net amount of the turnover was 627.24 million euros, 2% more than in the first half of 2018, corresponding almost entirely to the income from the liquidation of the railway charges charged to Renfe for the use of the road.

Both companies recorded a combined gross operating result (Ebitda) of 130.43 million euros in the first half, with a decrease of 10% in relation to that achieved in the same period of the previous year.

Adif explains in a note that this decrease is a result of the effort he has made to improve the quality of service provided to railway operators and train users. In this sense, they have increased their external expenditure on repair and conservation of the network and its buildings by 9%, approximately 17 million euros, compared to the first half of the previous year, as well as security and surveillance services, mainly in stations, which has grown by 6 million euros, representing an increase of 29.5%.

The investment chapter highlights that Adif AV executed high-speed investments of 533.43 million euros in the first half, with a decrease of 8.7%, while Adif's investment volume in the conventional line rose to 226.80 million euros, with an increase of 44.6% compared to that made in the same period of 2018.

Adif AV recorded an EBITDA of 144.43 million euros in the first half. The net amount of the turnover of the entity reached 296.86 million euros, with an increase of 3% over the first half of 2018. The collection by fees of the lines owned by Adif AV registered an increase of 3.29 %, while the activity measured in trains per kilometer was 3.60% compared to the same period of 2018. The biggest increase, both in monetary and production terms, in high-speed lines owned by Adif AV occurred in the axis Madrid-Valladolid-León-Zamora.

As for Adif, parent company and which is in charge of the conventional rail network, closed the first half with a negative Ebitda of 13.99 million euros. Between January and June, the net amount of the turnover amounted to 330.37 million euros, which represents an increase of 1%. The collection by fees of the lines owned by Adif increased by 0.94%, mainly due to the increase in tariffs.