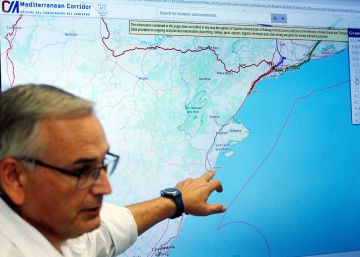 The public company Adif has approved the change of width of the Iberian to international track in a section of 157 kilometers, between Castellón and Vandellós, of Mediterranean corridor for 81.8 million euros and an execution period of 18 months. The commissioner of the Ministry of Development for this infrastructure, Josep Vicent Boira, has described the tender for historical milestone and has advanced that the change in width will be implemented in a platform in use.

Boira has stressed that the change in width will allow the circulation of trains 750 meters in length, according to European interoperability parameters. The routes will be of mixed use, that is, passenger and freight trains will circulate "following the German model", something that "will allow connecting the Valencian ports with the rest of the European market".

The first section of the tender is Castellón-Vinarós, which has a budget of 48 million and affects 77 kilometers in length. It includes the adaptation of section roads for 750-meter trains at the stations of Les Palmes, Torreblanca, Santa Magdalena de Pulpis, Benicarló-Peñíscola and Vinarós. The works contract for the Vinarós-Vandellós section (67 km) has been tendered for 33.7 million and works will also be carried out in another 13 km, corresponding to the L'Aldea-Tortosa branch.

According to the commissioner, "the Mediterranean Corridor knocks on the door of Valencia with this decision", which he has described as "brave" and "with a future perspective". Both sections were the most delayed in the infrastructure as a whole, which The Ministry of Development undertook to provide European width in 2021.

The mixed use route (passengers and merchandise) is socially profitable because it is more profitable in relation to high speed and the line will be able to absorb the growing traffic demands without reaching saturation, said Boira, who has been in favor of a transitory system of aid to logistics companies to adapt their rolling stock to the international width.