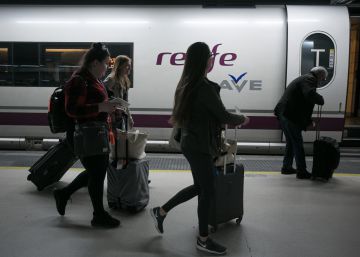 The railway manager Adif Alta Speed ​​has paid 144.5 million euros to the construction companies of the high-speed lines for damages, as the public company acknowledged to EL PAÍS. This figure includes the claims of works contractors both administratively and judicially between 2016 and 2019. A recent report of the Court of Auditors on the suspension of contracts reveals that only in 64 files of the 2014-2017 period the construction companies demanded Adif 162.7 million euros. Many claims remain open.

The lack of planning and the errors of the Administration explain that during the Spanish high speed works many of the contracts that Adif and Adif High Speed ​​(Adif AV), the public companies in charge of managing railway infrastructures and stations had to be suspended , subscribed with companies in the sector. A recent report by the Court of Auditors details some examples, such as the construction of an emergency exit from a tunnel in Tarragona that had to be suspended because no one had processed the administrative authorization to use explosives and be able to excavate the gallery.

The report mentions other cases of suspension of works because they needed previous jobs that were not even tendered. Stresses the case of the installation of a catenary, which had to stand because the road was not mounted. A “lack of coordination” and “poor planning” that the supervisory body puts in front of the Ministry of Development in one of several reports that it has dedicated in recent years to examine the expansion of high speed in Spain. In this case, the court focuses on the years 2014 to 2017 and only on contracts affected by suspensions. To do this, analyze a sample of 64 files, just over half of those who suffered these paralyzes.

When the Administration suspends a contract already tendered, the affected companies can claim compensation if they consider that it has caused them damages. Only in the 64 files analyzed by the court do companies claim Adif 162.7 million euros. At the close of the audit, the public company had already paid 12.4 million. The rest of the claims were still being processed.

During the years analyzed by the Court of Auditors there were 17 high-speed lines under construction. In the execution of 14 of them there was a suspension file. The supervisory body examines what were the most common causes of paralysis. The most common proved to be the dependence of the progress of other works. The second most alleged reason was the modifications to the initial project. The lack of coordination between administrations explains another part of the suspensions. In the construction of the San Cristóbal de A Coruña intermodal station it was necessary to suspend the file because it was pending to sign an agreement with the City Council of A Coruña and the Xunta de Galicia. “It is worth noting the lack of diligence that supposes not having signed the aforementioned agreement prior to the award of the contract,” said the report.

The overall amount of compensation paid to AVE contractors, for all claims – and all reasons, not just suspensions – between 2016 and 2018, is distributed unevenly, and increasingly. In 2016 there were only 7.8 million; in 2017, 37 million; They grew to 47.5 million in 2018, and the year that more damages were paid was 2019, with 52.2 million. “The figure may rise as there are processes that remain open for years,” added a spokesman for Adif.

In just three years, the public company was forced to triple the amount of provisions to address the risks of cost overruns and disputes with the construction companies of the AVE lines, the court report said. The item went from 149.6 million euros in 2015 to 504.4 million in 2017. Just to pay litigation with companies affected by suspended files, Adif estimated that it might need 104.7 million.

In the allegations to the report, Adif ensures that the court chose the most problematic contracts for the sample and states that the analysis “does not follow, in any case, that the agreed suspensions were not appropriate.” “It would be advisable”, concludes the Court of Auditors in its recommendations, “that Adif-AV planned the preparatory actions of the contracts, drafting of the project as well as technical specifications, in a methodical and organized way that allows the execution of the works in less time and with fewer incidents. ”