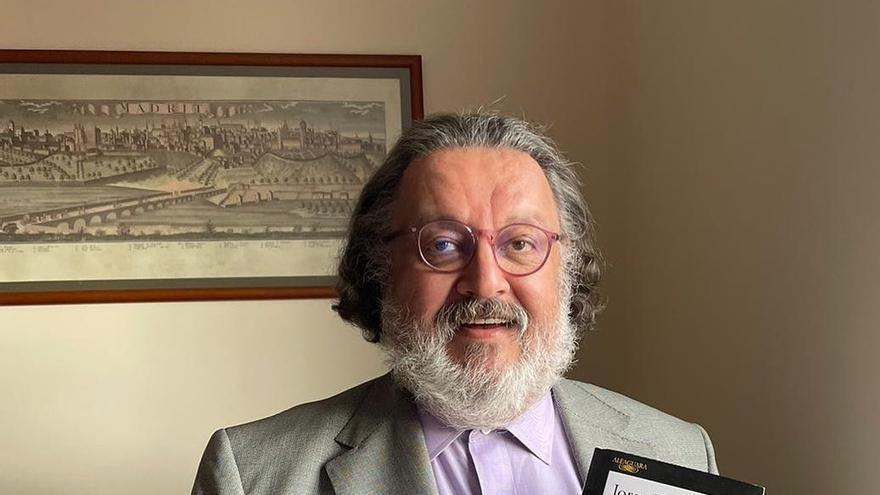 Mexico, Mar 21 (EFE) .- For the Mexican writer Jorge F. Hernández, finalist for the 1998 Alfaguara Prize, the art of creating novels is close to the job of the chronicler and the writer of stories, perhaps his two most endearing genres .

“Actually I am pure story. The novels that I like the most are made from spinning stories, such as” Don Quixote. “Few recognize that Cervantes’ work is an immense mural of stories, darned with a narrative thread so that it seems in one sitting, “he said this Sunday in an interview with Efe.

Basting small anecdotes was the technique with which Hernández, 58, made his most recent novel, “A floating forest,” published last February by Penguin Ramdom House.

It is a work with autobiographical overtones in which the author recreates his mother’s amnesia in the 60s, when he was a child and lived in the forest of Mantua, near Washington DC.

“I had to live in the United States the time of racial segregation, the Vietnam War, the eviction of a generation that had believed in psychedelic love and that ended with Nixon as president (1969-1974); for us it was the arrival of the worst possible president. That was surpassed by Donald Trump (2017-2021), “he says.

The book is a self-fiction in which Hernández reveals that his childhood was dark and dark, which he narrates, while following up on his mother’s memory loss in the vicinity of the forest.

“I wrote so that certain things are not forgotten that should not remain in amnesia,” he explains.

Although the reader suspects that there is some fiction in the stories, it soon becomes clear that the 193-page story is based on real events, such as the writer’s encounter, when he was about 12 years old, with “King Pelé” at the end of a Brazil’s Santos soccer game in Washington.

“They took him out so as not to continue destroying the gringos, he approached the fence and there I shook his hand. I swore I was not going to wash it. It was an extremely hot hand and the smile was impressive. The face was a complete smile, with a perfect set of teeth “, he remembers.

Hernández is obsessed with the greater work of Cervantes. Every year he reads “Don Quixote”, almost superstitiously, a custom he took after a conversation with the Cervantes prize winner Carlos Fuentes, who did the same, although he confessed that the original idea was not his, but that of the Nobel laureate William Faulkner.

“I decided to comply with this ritual as a young man and I have followed it except last year when I read it aloud for the first time with my son Sebastián. So I didn’t read it alone,” he confesses.

Historian, chronicler, writer of stories and novels, Hernández, a survivor of two heart attacks, believes that his heart will remain healthy if he remains clinging to books.

“The stories have relieved me, not only the ones I write, but also the ones I read. Since I was a child I have tried to avoid reading from all possible pain,” he explains.

“A floating forest” not only tells the story of the protagonist’s memoryless mother. In the play there is a tribute to friends. Hernández stops at a passage in his life, with his friend Bill Connors. Together they were invited on a field trip by a bad man who almost abused them.

With a poetic language, “A floating forest” speaks of the symphony of the leaves that clap with the wind, of ocher ducks and of the secret music of mathematics. The author confesses that he does not write poems, but is seduced by them.

“What saves us in any confinement, metaphorical or real, is in the books, it is in the verses, in the metaphor,” he says.

Collaborator in the past of the Nobel laureates Octavio Paz, in the magazine “Vuelta”, and Gabriel García Márquez, in “Cambio” and in the present columnist of “El País”, from Spain, and “Milenio”, from Mexico, for Jorge F. Hernández The important thing is to be related to the stories and he achieves it to such an extent that sometimes things like a character from a novel happen to him.

“Since I was a child I have had a propensity for random water, things happen to me every day,” he assures and then explains his experiences as a baseball catcher or a bullfighter’s apprentice, a job that he did not complete for reasons that he will explain in a work to be written.

In these times in which the human being destroys the environment under the pretext of civilization, Hernández assumes an optimist and imagines the Mantua forest preserved until eternity, intact, as it was in his novel.

“Hopefully life allows me to return to the forest to finish there. To live there and instead bury my heart in Guanajuato, that the remote memory that is childhood in black and white goes to the forest and whatever remains, they leave it in Madrid, another endearing city, “he concluded.