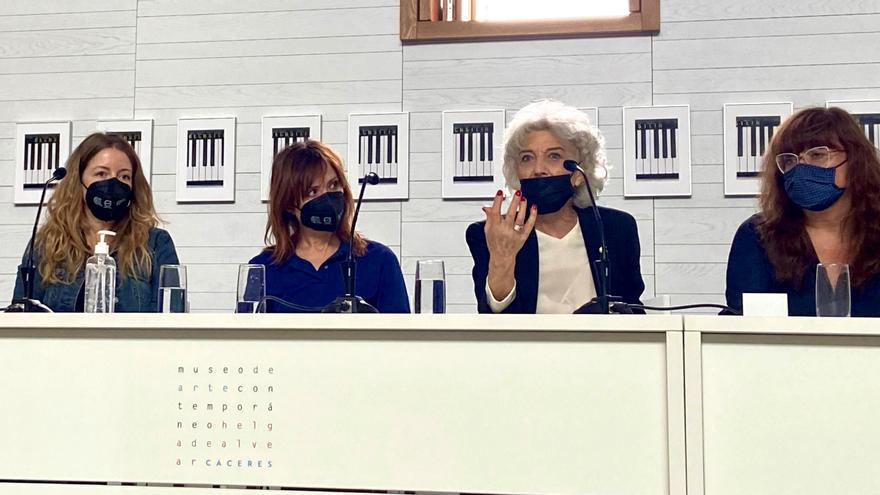 Cáceres, May 22 (EFE) .- The winners in this year’s edition of the San Pancracio awards, given by the Cáceres Spanish Film Festival, among which are Marisa Paredes, Nathalie Poza, Gonzalo de Castro and the director Isabel Coixet, have agreed that after the pandemic, a patronage law that rewards, encourages and expands private capital donations to cultural activities is more necessary.

“We have been asking for it for a thousand years. A law so that it can be invested in art, not only in football and tennis, a law to make movies, theater or concerts and that there be a tax relief for businessmen,” said Marisa Paredes, words that have provoked the unanimous applause of those attending the meeting in the auditorium of the Helga de Alvear Museum in Cáceres.

At the request of Marisa Paredes, who tonight receives the San Pancracio de Honor for her career, other winners have joined such as Coixet (best director for “Nieva en Benidorm”), De Castro and Poza, as well as Loreto Mauleón, the interpreter Carolina Yuste from Extremadura and the director Pilar Palomero.

The only one of the winners who did not attend the meeting was the actor Darío Grandinetti, filming in Argentina.

Marisa Paredes has insisted that the current era is not the Renaissance “and that is precisely why it is necessary to encourage a patronage law to reward investment in culture among those people who have money” and “and the banks, that only make people fire people, then they finance culture. ”

As for the exodus from theaters that the pandemic has caused, the winners trust that this audience will recover, although some like Coixet are more skeptical.

“On Thursday the cinemas in France opened after five months closed and at eight in the morning there were queues; I wanted to cry because we are talking about an audience that loves its cinema and its culture,” he said.

According to Gonzalo de Castro (“The curse of the handsome man”), the “liturgy of going to the movies depends on trust and the level of contagion” and he understands that “you have to be spectators again”, while Loreto Maunleón (San Pancracio by “Patria”), trusts that the viewer recovers from the fear of closed spaces.

The gap that the pandemic has widened between cinema in theaters and the increase in content platforms has also been addressed in the debate and Coixet, who recalled that his grandmother was a box office, has acknowledged that she is “a mercenary of the image “and it does not matter” where they give me an opportunity to tell stories, be it platform or cinema. ”

For her part, Nathalie Poza (best actress for “Invisibles” by Gracia Querejeta), has stated that “there is a need for face-to-face”, to go to the cinema “to experience something other than being at home glued to the screen” and he added that so much platform makes him dizzy and it seems “a bit pornographic” the way to offer what you have to consume.

In this sense, Paredes has pointed out that “cinema is made to be seen in the cinema, the other is also”, in reference to platforms.

For Marisa Paredes, the problem is that “with this plague that has come to us”, the rooms have been emptied and there are many exhibitors that are closing and the culture and ritual of going to the cinema is being lost, something that has not happened. with the theater “, which retains its audience.

For this reason, he has called on the Spanish film industry to campaign, “like a tour; actors and directors embark on a promotion to tell what cinema is.”