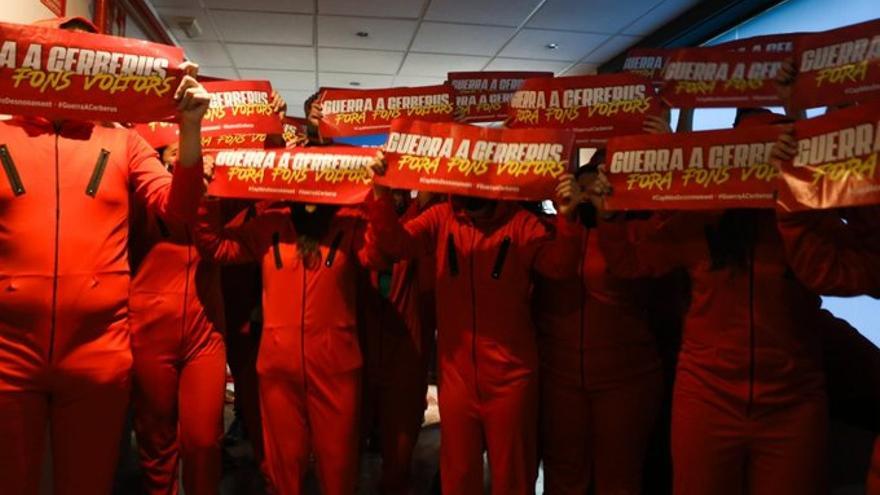 Several movements for the housing of Barcelona have occupied this Monday the headquarters of Haya Real State, the real estate that manages the investment fund Cerberus, to demand social rents in several apartments of their property and to stop the evictions. A quarantine of activists dressed in red overalls – like in the series ‘La Casa de Papel’ – have entered the real estate offices to demand “a valid interlocutor” to stop all the procedures that Cerberus has open.

From the Platform for People Affected by Mortgages (PAH), Maria Antònia Castellana explained that there are more than two hundred families affected by this vulture fund. “The objective is that the fight that begins with Cerberus serves as an example for other vulture funds,” said one of the spokespersons for the protest, Claudia Ruscalleda. “It cannot be that there are ten evictions every day while there is a law that obliges large holders such as Cerberus to offer social rents, “said Ruscalleda. In this line, he has asked that the investment fund comply with law 24/2015, stop evictions and offer a social rent to the affected families.

“The vulture funds are the main responsible for the housing crisis,” added Ruscalleda. The spokeswoman has assured that these funds are “opaque, difficult to understand and to locate” because they do not have a visible face. “That is why we have come here, to put a face to these monsters and unmask them,” he said. In addition, he has assured that the fund “has kept the houses of people who during the crisis of 2008 could not pay the mortgage” and accumulates more than 160,000 properties throughout the State.

Grouped under the ‘War on Cerberus’ movement, the Catalan PAH, the Tenant Union, and housing networks and unions from different neighborhoods of Barcelona and municipalities of Catalonia have participated in the protest. The action is scheduled to last throughout this Monday and there will be activities and musical performances, according to its promoters.

The activists recalled that in 2017 Cerberus signed an agreement with BBVA for the management of SAREB flats, creating the real estate Divarian. “Guaranteeing the right to housing is incompatible with making housing a business,” proclaimed Ruscalleda. One of those affected, Ana Maria Banegas, from the Gracia neighborhood, explained that a year ago she lost her house when Cerberus bought the building known as ‘el Armadillo’ from BBVA. “They did not offer me alternatives,” he remarks.