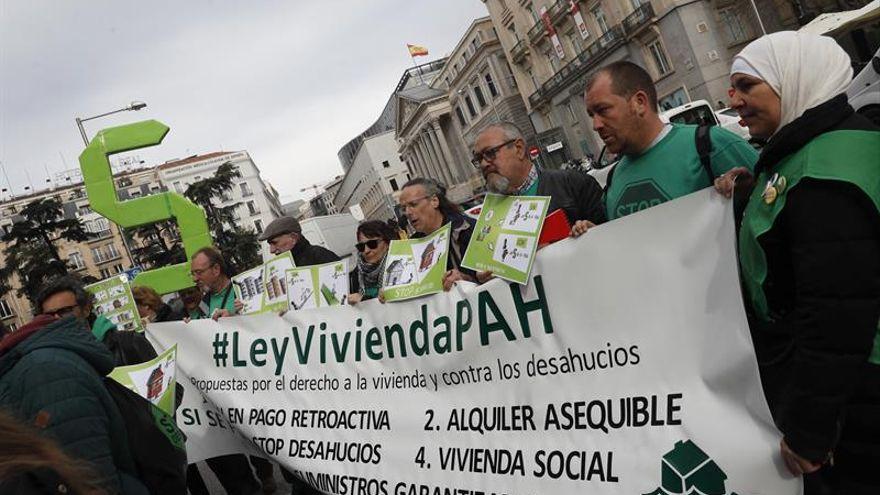 Unidos Podemos has turned to social activists to strengthen the candidacy with which they will attend the regional elections on May 4. Members of the PAH, the Green Marea and the Manteros Union have decided to accompany Pablo Iglesias and the rest of the representatives of the left-wing coalition that make up the list as independents.

With the incorporation of these members of civil society, the right to housing, anti-racism and the defense of public education will be present in the campaign of this formation. And if they finally manage to get their seat, these signings will face their activism from within the institutions, a challenge that other fellow militants have already faced.

“The first surprise [que te llevas] is [conocer] how institutions work, their limits are immense “, recalls Carmen San José, family doctor and regional deputy of Podemos in the Madrid Assembly in the legislature that began in 2015. She came to the regional Chamber with more than 60 years and a decades of experience in social movements linked to the defense of public health and trade unionism, he remembers how the operation of institutional politics created “a lot of frustration” for his “inability to influence the government.”

Guillermo Zapata, councilor of the Madrid City Council during the Government of Manuela Carmena (2015-2019) also takes a position on the operation and times of the administration. “One of the biggest frustrations was the difficulty to do the smallest things, [del] type: fix a sidewalk “, relates this activist, who had been active in the 15M and in the Patio Maravillas social group before embarking on Ganemos, one of the factions on which Now Madrid was based.

“Activism is agile, while institutional work is more tedious”, highlights the deputy of United We Can in Congress Juan López de Uralde, who also came to the institutions with a long history of environmental activism, first at the head of Greenpeace and then of the political formation Equo.

López de Uralde explains that the first obstacle he faced in Congress was found in his own political space. “Not everyone agrees with your approach,” he says. Later, external pressures came, especially from lobbies, so that “the laws go in a different direction from what” he would like. “Many times it is true that the possible is not what you would like,” he adds. Even so, López de Uralde considers that he has found “a lot of support” in his party to present the proposals he has defended.

United We Can is not the only party that has chosen to include relevant civil society figures on its lists. Albert Rivera signed Sara Giménez in 2019, representative of the gypsy community, lawyer at the head of the Equality department of the Fundación Secretariado Gitano for 18 years. She is currently a deputy for Ciudadanos in Madrid and considers that the incorporation to the first line of the policy “of people from civil society and who know the reality of vulnerable groups” is “an opportunity” to defend the issues in which they believe.

Giménez defends that “the leap into politics” has already been worthwhile for him because of the work he can do “in the legislative part” and cites an example that has been enriching in the two years that he has been in Congress: the unanimous approval of the eradication of forced sterilizations of women with disabilities . Not all are positive perceptions, she also faces troubles in her daily work as a deputy. Giménez is disappointed “that Human Rights issues are still seen with political colors.” “It frustrates me that a good proposal is rejected only because it is proposed by one party or another,” he says.

Managing the frustrations and parliamentary experience of those interviewed is very personal. Even so, this perception is affected by the ability of their formations to influence the government of the day. In the legislature in which Carmen San José was in the Assembly, PP and Ciudadanos had an absolute majority, a roll that swept away the expectations with which the utility had reached the Vallecas parliament.

“Almost all the work that is done in the chambers does not manage to transform the political orientation of the Government that is in that moment [en el poder]. There are many obstacles “, remarks this former regional deputy who was only one legislature in the Madrid Assembly. Currently, she has no connection with the political formation in which she was active and collaborates in the Audita Sanidad platform. She arrived in Podemos after passing through the Commission of Salud del 15M and join the Churches party circles.

Unlike San José, Zapata was part of a government team. He was a councilor for the districts of Fuencarral-El Pardo and Villaverde in the City Council of the capital. Even so, he regrets that they had to face the obstacles generated by “the centralist neoliberal governance of the Madrid City Council” that had been in force in the Palacio de Cibeles for more than 20 years. It was a context in which “the power of the legal and administrative is placed above or against the political decision.” Faced with these dynamics, Zapata defends that “you have to push a lot to achieve things that seem simple.”

The best known leap from activism to institutions is that of the mayor of Barcelona, ​​Ada Colau, although in this case there was a temporary transition, in which the political space with which she participated in the 2015 municipal elections was built. Colau left the national PAH spokesperson in May 2014 and won – in front of Barcelona En Comú– in an adjusted way the elections a year later.

Weeks before one of its best-known faces arrived at the Consistory of the Catalan capital, the PAH released a statement warning that they are a “nonpartisan” group, although they recognized – “it could not be otherwise” – “the individual right that assists each person to intervene in the different fields of institutional politics.” Last week the anti-eviction platform recovered the same text, influencing that the group did not join any party, a day after Alejandra Jacinto made public her signing for United We Can.

PAH attorney and housing rights activist, Jacinto will concur as an independent at number four on the lists led by former Vice President of the Government Pablo Iglesias. Together with the lawyer The veteran CCOO union member and member of the Marea Verde Agustín Moreno and Serigne Mbaye, spokesman for the Madrid Manteros Union, also present themselves as independent figures.

“It is necessary to reverse the disastrous housing policy that the Community of Madrid has had for 40 years. It is necessary to bet on a change of model that puts the right to housing at the center,” claimed Jacinto when announcing his candidacy.

As happened in Barcelona at the municipal level, the arrival of Manuela Carmena’s team at the capital city council also caused several members of civil society to make the leap to institutional politics, after having previously worked on the platform that served them as a political party with which to stand for the 2015 municipal elections, Now Madrid.

“That plebeian irruption in the institutions was a shock,” highlights the former councilor of the Madrid City Council, Rommy Arce, who was also part of Ganemos. In their memory of that political experience are the attacks they received “from the right”: “They were continually questioning our ability to carry out our work correctly and with dignity.”

The relationship with social movements from the City Council was closely followed during the years in which Carmena’s team was in charge of the Consistory. Arce points out how the rest of the political groups questioned that, although they held a public position, they maintained an “activist activity”, attending rallies and evictions.

For Zapata “the best” of his experience as a district councilor was the dialogue with neighborhood groups that served as a “social lever”. She recalls an episode in which neighbors from the experimental neighborhood of Villaverde came with garbage bags to the district meeting because waste was not collected near their houses. “They have given me the cane they had to give me,” he says.

The interviewees emphasize the importance of not forgetting where they come from, despite the dynamics of politics. For López de Uralde, the experience and commitment acquired during his years of militancy “is a differential fact” upon reaching the administration. “We have a very clear cause to fight for and that has determined our trajectory,” adds the deputies of United We Can. “You have a series of loyalties that you cannot forget when you are in public office,” concludes Arce.