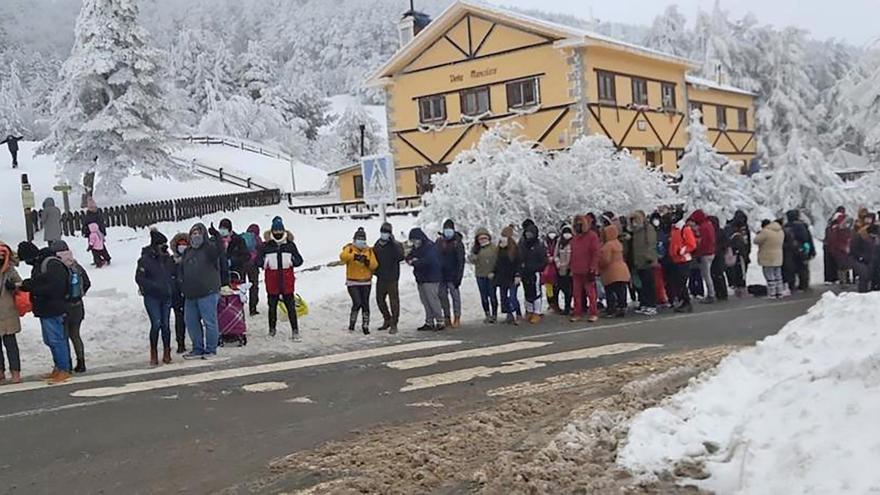 This Monday, at 9.16 am, the DGT announced on social networks the closure of the parking lots in the mountains and subsequently the M-601 access road to the Port of Navacerrada was cut off at kilometer 12.5 in Cercedilla.

This Sunday this road collapsed again due to the snow and the avalanche of Madrilenians to the Sierra de Madrid, a picture that has been repeated throughout this Christmas despite the recommendations of the health authorities.

Just yesterday the Firefighters of the Community of Madrid had to rescue a woman and her two children who had been lost in the Navafría area, in an intervention very complicated by the cold and wind, according to the 112 Community of Madrid in social networks.

To avoid this type of situation, the Madrid 112 Emergency and Security Agency announced a series of measures, in force until next January 10, to avoid crowds at the accesses to the Sierra de Madrid.

Among the measures contemplated, which has been carried out this Monday, is that the Civil Guard will cut the roads when the car parks are complete.

Last Saturday 350 people had to be evacuated from the port of Navacerrada due to delays in the usual bus line back to Madrid due to snow, ice and the large influx of Madrilenians who came to the Madrid mountains.

Finally, six buses managed to reach the area to evacuate all the people, who had to provide thermal blankets and food, according to the Civil Guard.

In addition, in the port of Cotos, Emergencias 112 Comunidad de Madrid had to coordinate the assistance of another 150 people agglomerated waiting for the bus back to Madrid.

The Ministry of Transport announced that it works in coordination with Emergencies Madrid 112, Civil Guard and the General Directorate of Traffic and has reminded all Madrilenians of the importance of following the recommendations of these organizations before traveling to the mountains.