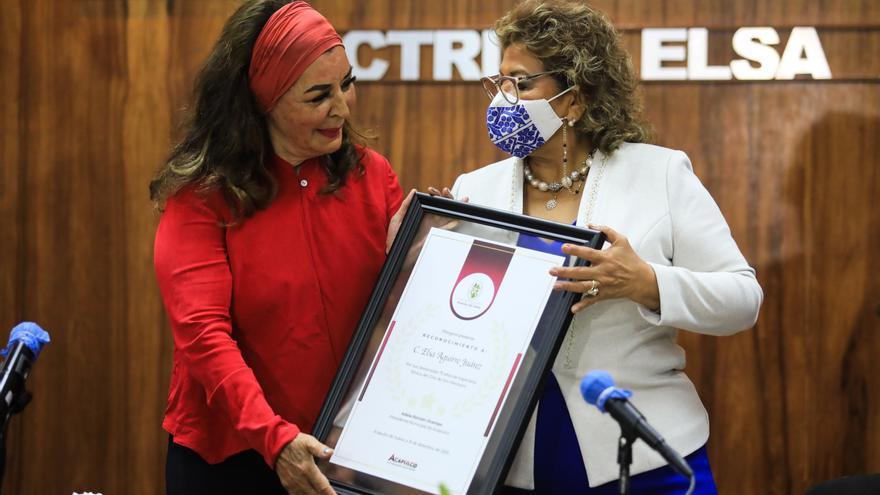 Acapulco (Mexico), Dec 18 (EFE) .- The city of Acapulco awarded this Friday to Elsa Aguirre, actress of the golden age of Mexican cinema, for her 75-year career, considering her an example of freedom and empowerment for women of the port.

Known as "the most emblematic jewel in Mexico" for her beauty and talent, Elsa Aguirre said that of all the recognitions she has received during her career of more than seven decades, this is the one she deserves the most.

"A servant has reached 90 years (of life) in her career," said the artist.

"Before I said I don't deserve it, but now we have worked and I want to feel useful until the end of my days," he commented with a broken voice.

Aguirre was born on September 25, 1930 in the northern city of Chihuahua, capital of the state of the same name.

Despite being born on the other side of the country, the actress stood out when she acted in the movie "Acapulco" (1951), and in the soap opera "Acapulco, body and soul" (1995).

She is considered one of the most emblematic artists of the Mexican golden film era, which runs from 1930 to 1969, a period in which she performed with celebrities such as Pedro Infante, Joaquín Pardavé and Pedro Armendáriz.

Despite having a successful career, the woman known as the eternal beauty of the sea, assured that the most important thing has been to be free.

“I was given what was mine, the cinema, but I did not want to be famous or be rich, what I wanted was freedom. Being independent is the most beautiful thing in life ”, he declared.

For this reason, at the beginning of 2021 she will launch her biographical book where she will reveal her life from a young age, until her last years, through her arrival at the cinema and the death of her only son.

Although the years have passed for women, who have been considered one of the most beautiful on the planet, the projects continue despite the covid-19 pandemic.

Among them is a short film next to who was his love in the film "Vanilla, bronze and dying" (1957), the actor Ignacio López Tarso.

The film is about a love story in Acapulco, where two older people meet again after years of separation.

Among the projects that accompany Aguirre, there is also the formation of a yoga center in the port, a discipline that she believes will help keep young people away from "bad behavior."

The actress concluded that she has "fulfilled" this "process called life", so she is "calm and at peace, fulfilling certain things that she had to accomplish."