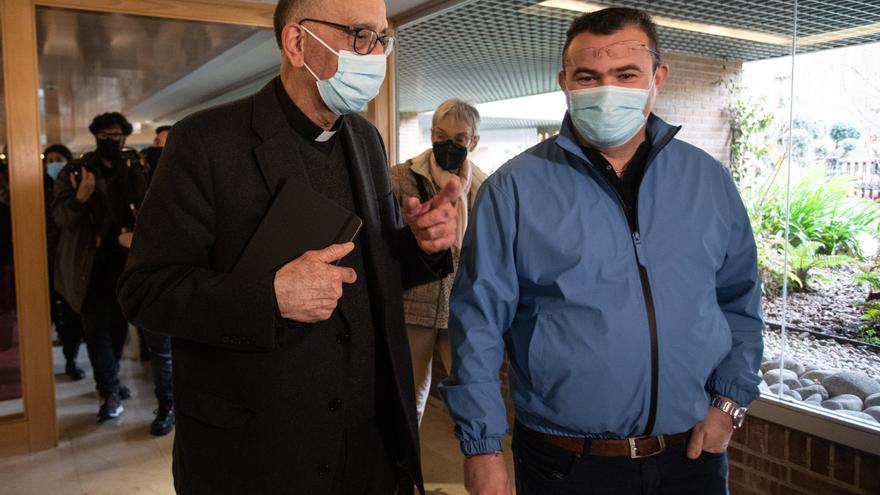 "We must demand a change of course." This is how the three and a half hour meeting that fifteen members of the National Association of Stolen Children has held with the president of the Spanish Episcopal Conference (CEE) and Cardinal of Barcelona, ​​Juan José Omella, at the headquarters of the Catholic institution.

Juan Cuatrecasas: "Forcing members of the Church to attend a commission does not work"

This group, which brings together survivors of clerical pedophilia and abuse of power and of other kinds in other areas of society, has explained to the president of the bishops why they are not going to collaborate with the audit promoted by the EEC to investigate the pedophilia in the Church and led by the office of lawyers Cremades & Calvo Sotelochaired by Javier Cremades, a member of Opus Dei.

The group's spokeswoman, Ana Cuevas, has pointed out that neither she nor the rest of those affected "can recognize the authority" of the law firm chosen by the EEC. This woman, the mother of a minor who was sexually abused by a Gaztelueta school teacheran educational center of Opus Dei in Bizkaia, has assured that the Prelature founded by Josemaría Escrivá de Balaguer is a "denialist institution where complicit silence and re-victimization prevail."

Omella has assured - always according to the statements of members of the association - that she will study the request of the members of Infancia Robada. “We demand a rectification from the Spanish Episcopal Conference and a solution to the specific cases that we have put on the table”, she added. From this group they urge the bishops to collaborate with the investigation commission promoted by Congress and which will be led by the Ombudsmanthe socialist Angel Gabilondo.

Along the same lines, Cuevas considers that the investigations promoted by Parliament will lead to "a neutral, exhaustive and transparent investigation." To do this, they have also asked the president of the bishops that the institution he directs open "his files" and provide "all the information necessary to purge responsibilities."

Although the meeting has been held behind closed doors, the meeting has been communicated with light and stenographers. In the entrance hall of the CEE headquarters and before several dozen cameras and journalists, Omella has received the victims. After greeting them one by one and posing for the media, the representatives of the collective and the Cardinal of Barcelona have begun a meeting that has lasted two hours longer than they had planned since Stolen Childhood.

The reception that the cardinal was going to give to those affected before the cameras has been unknown until the last moment. From the press office of the Episcopal Conference they lowered the expectations of the meeting. "We have not made any calls in this regard," they pointed out hours before the meeting started, distancing themselves from any communication that could occur before or after the meeting. "We are not going to say anything," highlighted the same sources.

Finally the image has been produced. At all times, the president of Stolen Childhood, the socialist deputy Juan Cuatrecasas, had insisted on the public nature of the meeting and pointed out that the meeting was called at the request of Omella. The meeting is framed in a progressive approach from the Cardinal of Barcelona to the representatives of Stolen Childhood and, unlike other occasions, the meeting of this group with the leader of the Conference has been made public.

At the end of the meeting, Omella also briefly accompanied those affected. Before the media, she thanked the "trust" of the victims who have spoken and "listened" to her. The participants also thanked the leader of the Episcopal Conference for convening them.

Among the requests made by members of the association, Cuevas has highlighted that they ask for a "public and unapologetic pardon, which is endorsed by all the members of the Episcopal Conference." In addition, they require "reparative psychological and psychiatric therapies for life for survivors", "financial compensation for damages caused" and "compensation for incapacity for work".

After this meeting, the group of victims is waiting for a response from Omella. “She is going to study it, he is also going to talk about it with the Pope and we are waiting a bit. We have asked him to collaborate with the Ombudsman because for us he is the figure we really trust”, Cuevas closed.