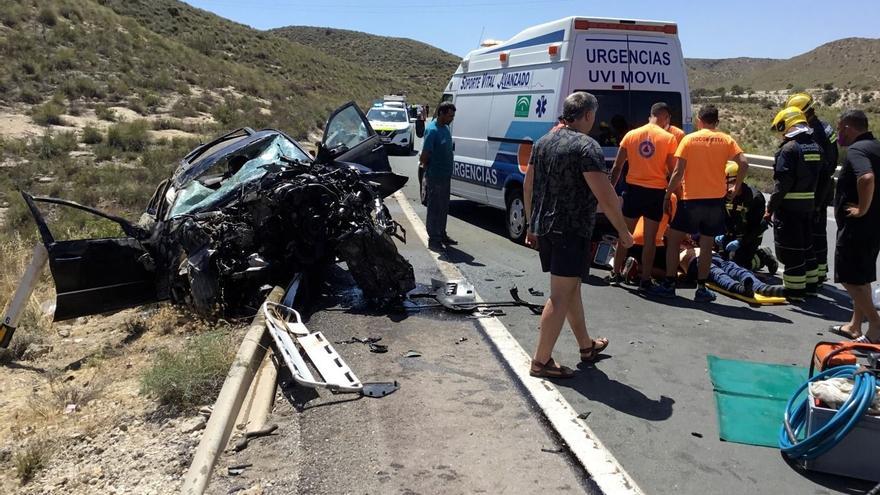 “It should not be forgotten that when the coronavirus pandemic passes, the pandemic of traffic accidents and its dramatic consequences will reappear.” This prediction, made last January by the head of the General Directorate of Traffic (DGT), Pere Navarro, in a interview in elDiario.es, it has ended up being fulfilled. After the toughest times of the health emergency and restrictions on mobility, the accident rate has returned to Spanish roads.

In the first seven months of 2021, until July 31, a total of 559 people. The figure represents a decrease of 8.4% compared to the same period in 2019 – when traffic accidents claimed the lives of 610 people – but it must also be put into context, since the state of alarm was in effect until May 9 that limited travel between autonomous communities and even within them. Even less comparable are the data for the same period in 2020, when strict confinement kept citizens in their homes for part of the spring. Then 458 deaths were registered, a historical decrease that Navarro himself attributed to the “vicissitudes and tribulations“of the pandemic.

After the end of the restrictions, alarms went off in the DGT and the Ministry of the Interior last June. In that month alone, 116 people died on the roads, representing an increase of almost 50% compared to the same month in 2019, when traffic accidents took the lives of 78 people. “These are very worrying alarm signals, which we must tackle as soon as possible. It has taken us a lot to get to this summer. We have started with good news, the end of outdoor masks, which is already advancing the end of the nightmare. Let’s spoil. Vaccines make us immune to the virus, not to traffic accidents, “recalled the Interior Minister, Fernando Grande Marlaska, in a Press conference last June.

The minister anticipated in that appearance the message that the DGT has taken to radio, television, digital media and social networks during this summer period: “Do not spoil this summer that we deserve so much.” The fear of the authorities was that after the restrictions there would be a relaxation in the citizens that could cause a lack of caution and excesses that would lead them to commit driving offenses.

After the alarming data for June, the trend seems to have changed in July, when there were 95 fatal accidents with 99 deaths, 18 less than in the same month of 2019. It is also a lower figure than that registered in July of last year – coinciding with the end of the mobility limitations after the first state of alarm – when the deaths on the roads reached 115. However, the summer is not over yet and the special operation of August 15 and the operation return at the end of the month, which leads public officials to fear that the rebound in accident data will eventually consolidate in these summer months.

For this summer, in which the estimates speak of a total of 91.2 million trips with data very similar to the pre-pandemic levels, the DGT has combined the aforementioned awareness campaigns in the media with the usual operations of regulation and surveillance. Also with devices to intensify alcohol and drug controls or focused on some of the groups that present greater risk, such as motorcyclists.

For example, on the weekend of July 24 and 25, the DGT carried out a special surveillance and control device on roads particularly frequented by motorcyclists – which are usually conventional ones, where 85% of fatal accidents are concentrated in this type of vehicle– which resulted in 493 complaints out of a total of 13,583 motorcycles controlled. Speeding led to the bulk of complaints, with a total of 184.

The existence of reckless drivers is of particular concern to the authorities. Last week, at a press conference, the prosecutor of the Road Safety Chamber, Bartolomé Vargas, called on citizens to immediately report any reckless and risky driving on the road after having detected an increase in these behaviors after confinement. “There are more drivers who despise and do not respect traffic regulations,” said the prosecutor, according to Efe.

This is the first time that the Public Ministry reminds citizens that they are “entitled to report” with an explicit call to do so. Specifically, the prosecutor urged citizens to write down the license plate and stop to report behaviors such as harassment or harassment of another vehicle, improper overtaking, high speed in areas with the presence of pedestrians, skidding or exhibitionist actions.

Vargas also addressed the traffic police, who, through an official letter, asked to carry out more speed and drug and alcohol consumption controls. The latter were reduced by around 50% in 2020 – three and a half million less than in 2019 – as a result of the agents’ dedication to mobility controls to enforce restrictions and the fewer number of vehicles circulating on the road. the roads.

According to data from National Institute of Toxicology and Forensic Sciences, almost half of drivers who died in 2020 tested positive for alcohol, drugs and psychotropic drugs. Thus, of the 597 drivers who died in a traffic accident during the past year and who underwent an autopsy and toxicological analysis, a total of 291 (48.7%) yielded positive results for these substances, which implies a 3.2 % more than in 2019. Likewise, speeding is another of the great challenges in the fight against accidents on the roads. A specific DGT campaign between July 12 and 18 in which 555,221 vehicles were controlled ended with 29,301 drivers reported for driving at a speed higher than the permitted speed. It is more than 5% of the total.

On the other hand, the data handled by the State Attorney General’s Office also offers another worrying perspective: the figures for road accidents did not decrease during the year of the pandemic in the same proportion as mobility. Thus, long-distance movements were reduced in 2020 by 24% compared to the previous year, compared to a decrease of 17% in accusations for road crimes and 10% in judicial proceedings initiated in this matter, of which 90 % – a total of 102,084 – ended in conviction. This is a higher figure, for example, than that registered in 2017, when procedures for crimes against road safety reached 96,303. At the same time, convictions increased by 50%: from 2,009 in 2019 to 3,050 last year.

In the absence of complete data for this second summer of the pandemic, the Prosecutor’s Office is especially concerned about the increase in crimes related to punishable speeding, with 707 accusations by the Public Ministry in 2020 compared to 531 in 2019; and with reckless driving, with 2,087 accusations last year compared to 1,369 in 2019.