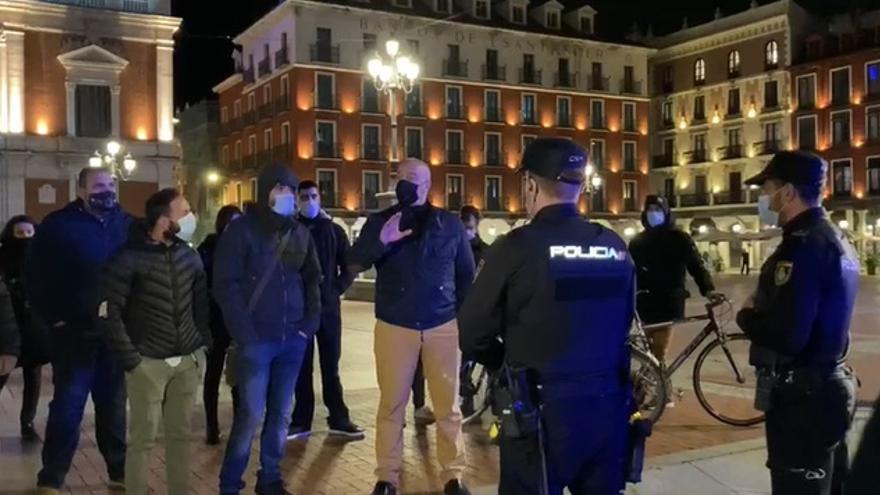 About thirty people demonstrated in Valladolid last Saturday night against the curfew decreed by the Junta de Castilla y León, which came into effect this weekend and which will apply for fourteen days from 10 p.m. to 6 a.m. in the morning. Shouting “freedom”, a heterogeneous group of virus deniers and critics of the management of the pandemic spontaneously gathered in Valladolid’s Plaza Mayor. “We are dying of hunger. Freedom!” one of the citizens who has emerged as the spokesperson for the improvised demonstration has snapped at the agents. “People have died to me and my children are not going to starve. And I have nine!” He shouted.

After ten o’clock at night National Police vans arrived to identify the protesters and 26 people were proposed for punishment. Despite some moments of contained tension, with shouts and some “long live Spain!”, There were no altercations or arrests. “I ask you to leave. They would do me a favor if they left, “one of the agents told them after half an hour of concentration.

While the policemen took the data, the citizens gathered under the statue of Count Ansúrez, chatted animatedly in groups, in which they questioned the legality of the curfew imposed by the Junta, the usefulness of the masks, the mortality of the virus, or the effectiveness of PCR tests. After carrying out the identifications and informing the protesters that a sanction was to be proposed, they began to leave.

They met again to hold a meeting of the same court for this Sunday, although one of the most exalted, who came to ask an agent if he lived with the vice president of the Junta de Castilla y León, Francisco Igea, warned his colleagues: yes The Government decrees the state of alarm this Sunday, to express it is already playing it too much. In any case, this citizen, identified as a lawyer, offered to take the cases to his fellow protesters.

The Government Delegation in Castilla y León has reported through a press release that the first night of the curfew in Castilla y León passed mostly “quiet”, without notable incidents and with “very high compliance” with the restriction hours established by the Junta de Castilla y León, according to the assessment of the regional leaders of the State Security Forces and Bodies.

However, in the balance made by the security forces of the 9 provinces, and according to the data provided by them to the Government sub-delegations, the night ended with a total of 276 complaints for breaches of the regulations that limit mobility in the Autonomous Community from 10 p.m. to 6 a.m.

This data, however, is minimal in relation to the number of interventions by the Security Forces and Bodies, which mostly informed people who were on public roads after the curfew of the entry into force of the restriction and verified that, in a very large percentage, these citizens were in one of the cases allowed by the decree of the Junta de Castilla y León.

Burgos, the province with the most reports of complaint

The province in which the most complaints were filed was Burgos, with 98, 75 of the National Police in total, -of them 37 in the capital, 12 in Miranda de Ebro, and 21 in Aranda de Duero-, highlighting those imposed on a group of 5 young people who were celebrating a party in a warehouse in Villímar, in the National Police demarcation, and another 23 complaints from the Civil Guard out of a total of 81 people identified during the restriction hours.

On the contrary, the province with the fewest sanction proposals was Zamora, with only 4 from the Civil Guard and zero complaints in the capital.

Behind Burgos, are Valladolid, with 66 complaints, 24 of them to a group of people who rebuked the National Police in the Plaza Mayor resisting to evict; Salamanca with 33, 25 of them in the capital; Segovia with 26, 12 of them in the vicinity of the aqueduct, 1 for disobedience and 11 people intercepted traveling in various vehicles; León and Palencia, with 14 complaints each; Ávila with 11, all of them imposed by the Civil Guard; and Soria with 10, all in the capital, due to non-compliance with the schedule, consumption of alcohol on public roads and not using a mask.

The Government delegate, Javier Izquierdo, deeply thanks the citizens for the majority respect for the regional regulations and the Security Forces and Bodies for the intense work carried out during the early morning hours, which has passed without notable incidents, highlighting the successful coordination of the State security forces with local police, whose operational deployments guaranteed respect for the rules.

However, Izquierdo emphasizes that, no matter how efficient the surveillance devices were, the positive balance of this first night of curfew would not be possible without the responsibility and solidarity shown by the Castilian and Leonese citizenship, which once again exhibits this their maturity and commitment to the common goal, which is none other than defeating the pandemic, exemplary.

Finally, the delegate also appreciates the commitment of the hoteliers of the Autonomous Community, which is evident that they assume a sacrifice that is especially harmful to their activity with these measures and, nevertheless, they have been fully respectful of the opening and mobility limitation hours established in the nine provinces.