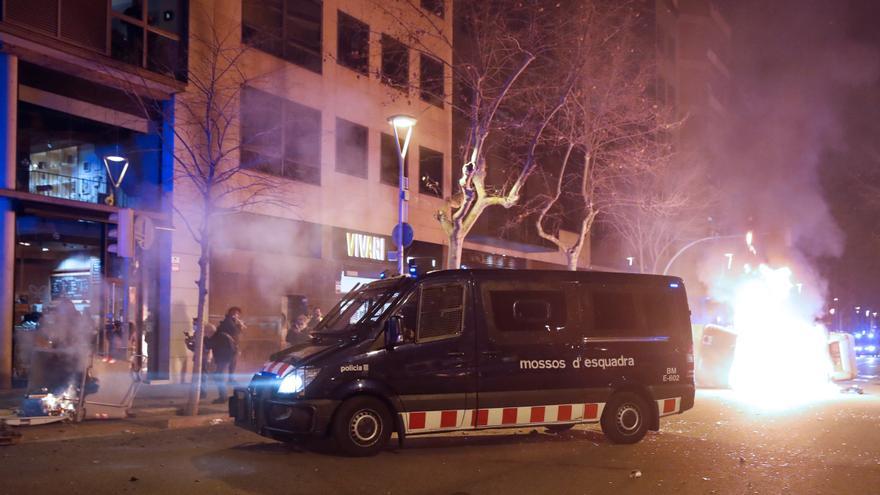 Barcelona, ​​Jan 30 (EFE) .- Some 700 people have demonstrated in the center of Barcelona in support of the rapper Pablo Hasél, whom the National Court has ordered to enter prison, in a protest that has resulted in moments of tension and burning of containers in front of the police cordon guarded by the Government Delegation.

The demonstration, called under the slogan “Total Amnesty”, began at 7:00 p.m. in the Jardinets de Gràcia in Barcelona and has run in the direction of the Government Delegation, on Mallorca Street, protected by a strong display of Mossos d’Esquadra.

At the doors of the building, moments of tension have been unleashed when a group of protesters has demolished some of the fences that formed the security perimeter and several garbage containers, which they have set on fire, in addition to throwing bottles and cans at the police line.

Subsequently, the protesters have dispersed around the area and set fire to several containers on Còrsega street in Barcelona, ​​which the neighbors themselves have extinguished with buckets of water while rebuking the perpetrators of the incidents.

This has forced the mobilization of firefighters and riot police, who have moved their vans to disperse the protesters, without any charges being produced.

During the march, the protesters have raised pro-independence flags and symbols against the Monarchy, while chanting slogans against “repression” and for amnesty.

The demonstration, in which social distance has not been respected, was called in support of the rapper, after the National Court gave him ten days to enter prison to serve a sentence of nine months in prison for exalting terrorism and insults to the monarchy.

Hasél was sentenced in 2014 to two years in prison for exalting the terrorism of ETA, the Grapo, Terra Lliure or Al Qaeda in his songs, but the Court decided in September 2019 to suspend his execution for three years.

In 2018 he was tried again for the same crime and another for insults to the monarchy and the security forces. Although initially he was sentenced to two years in prison, the Court reduced the sentence to nine months in prison, which the Supreme Court ratified last June.

In addition to Barcelona, ​​demonstrations in support of the rapper have also been held in other Catalan towns, including Lleida and Girona.

Tags: 700, do the, manifestation, persons, rapper, tension, they support