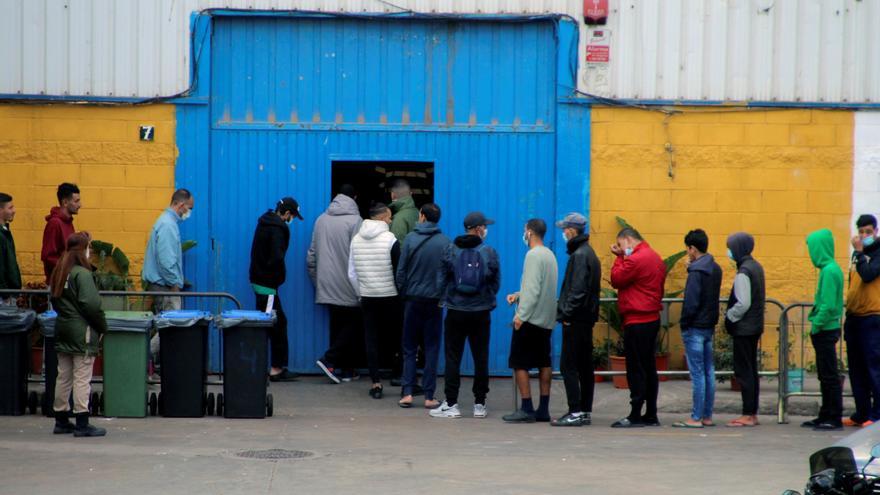 About a thousand Moroccan immigrants, of them 425 minors, are still welcomed in Ceuta just six months after the first of the two days of the border avalanches registered in the city on May 17 and 18.

The presence of these people still constitutes the main regret of the Ceutí Government that presides over Juan Jesus Alive (PP), which continues to demand the support of the Government so that these Moroccans can return to their country of origin in order to close the provisional resources enabled to respond to this humanitarian emergency.

The new newsletter of the Ministry of Interior, issued this Tuesday, still does not update the numbers of arrivals to Ceuta in those days, estimated at about 10,000 immigrants, although the autonomous government has calculated that they were around the 12,000 people those who managed to enter those days in mid-May.

As Efe has been able to verify, the border this morning has nothing to do with what happened on those days. Today tranquility reigns, Morocco has reinforced its side of the fence with new concertinas and obstacles to make access to the beach difficult and only one vehicle from the Civil Guard is next to border breakwater.

The situation of minors is the issue that most worries the Government of Ceuta, which has always maintained that these children must return to their families and his environment in Morocco.

Of the 1,109 minors who were registered in the two days in which the avalanches occurred, currently 425 remain in the city, most of them sheltered in the temporary shelter in Piniers.

The Government of Ceuta, as the Minister of the Presidency has pointed out to Efe, Mabel deu (PP), has evidence that more than 550 minors returned to their country in the following days and that another 60 have been reunited with their relatives in different areas of Spain and even Europe.

However, since mid-August the return of these minors to their country of origin was judicially paralyzed, after only 61 could be returned – of which six later turned out to be of legal age – during four consecutive days.

Almost all of these minors have been schooled in schools and in five institutes in the city -the latter in the afternoon-, especially with literacy and language immersion classes.

“In the middle they are adapting perfectly, the vast majority attend regularly and that is very good for their own training, “one of the teachers who give classes to these minors in the afternoon has commented to Efe.

In the meantime, the adults who entered have followed different paths. Many of them – up to a total of 3,683 – decided to return to their country voluntarily and another 2,500 have chosen to resort to political asylum.

This asylum request – to which 33 minors have also joined -, which entails power circulate freely throughout the national territory, it has already allowed 1,968 Moroccans to have managed to leave Ceuta towards the peninsula.

This asylum route has led to long queues of people for many days, both in the area itself. border customs as in the surroundings of the Superior Headquarters of the National Police.

Meanwhile, the city keeps others welcomed in the ships of Tarajal 580 adults -mainly family nuclei- that are waiting to resolve their situation.

Likewise, there is evidence of a pool of immigrants who are hidden in mountains and on the breakwaters of the port of Ceuta, without a specific number, waiting to be able to travel illegally to the peninsula in a vehicle, boat or boat.

More than 140 irregular settlements have been dismantled by the Ceutí Government, through different environmental brigades, throughout these months, mainly in places near the coast or in areas of the mountains, where these people had settled.

These immigrants are the ones who preferably try to reach the peninsula illegally by boat. In fact, Civil Guard sources have informed Efe that since the avalanches occurred dozens of interventions have been recorded where they have intervened boats, inflatables or other types of boats.

Between 2,000 and 4,000 euros per person, it is estimated that many immigrants pay to illegal networks, although there have also been cases of theft of boats in the Ceuta marina that have subsequently been used for these illegal crossings by the Strait of Gibraltar.

Police sources have told Efe that this last action – that of taking a pneumatic or a patera- is being the most used by these people, that they acquire from clandestine networks.

The most dramatic face has resulted in the discovery of up to twelve bodies on the city’s shores, including at least two minors, some of which they would have tried to swim from Morocco and others who were already in Ceuta and intended to flee by sea.

The truth is, six months after the avalanches, the city still remembers what has been the most complicated migratory episode in the history of Ceuta. The figures and the consequences prove it.