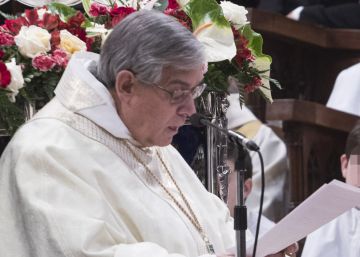 The abbot of Montserrat, Josep Maria Soler, has apologized for the sexual abuse of minors committed by religious of the monastery - verified by the commission of investigation on abuses in the community - and has admitted that the mechanisms of prevention and control failed, in his homily this Sunday at the main mass of the basilica. It has also pledged to improve and increase "in a short term" the existing child protection mechanisms, although it has not specified how.

Soler has claimed that they do theirs the report of the commission of inquiry published on Friday, who concluded that the monk Andreu Soler - against whom they received 12 complaints - was "a sexual predator and a pedophile." And he also found two accusations of abuse against the person responsible for the Escolanía, identified by the acronym VMT, between 1960 and 1968. "Therefore, I want to express, on behalf of the brothers of the community, our dismay at knowing the evil that it was done to the victims of abuse, "he said.

But nevertheless, the abbot and his predecessor in office, Sebastià Bardolet, have known the complaint since 1999 of abuses of a minor against the monk and did not take any action, as this newspaper published last January. Only in 2000 the defendant was transferred to another center of the order, but the abbey did not report it to the police, nor did he open any canonical procedure, according to Church rules, nor did he notify the Vatican. In a video recorded in 2015, the abbot recognizes which, contrary to what he had said publicly, already in the seventies knew rumors about possible abuses of the friar, founder and director of the group scout of the sanctuary In an interview with TV3, Soler has stated that he does not intend to resign due to cases of child abuse.

The abbot said during his homily that "Montserrat also has its weaknesses and its sins", and that on Friday, with the report made public by the commission, the commitment made at the beginning of the year to investigate allegations of abuse "was fulfilled with will to transparency ". In addition, he has condemned any type of abuse of minors and has expressed his "commitment to firmly fight against such a serious problem that affects our entire society," as the monastery already said in a statement on Friday after the report of the commission.

Soler has repeated, "if it fits more intensely than last February 3", his request for forgiveness to the victims and their families, and has expressed the will of the community of Montserrat to make itself available and accompany them in their suffering and recovery, if you wish.

Abbot Soler was one of the members of the monastic community interviewed by the commission of inquiry, constituted on January 24 and composed of the lawyer Cristina Vallejo, the doctor Xavier Pomés and the psychologist Begoña Elizalde, with participation, with voice and without vote , from the spokesman of the monastery, Bernat Juliol.