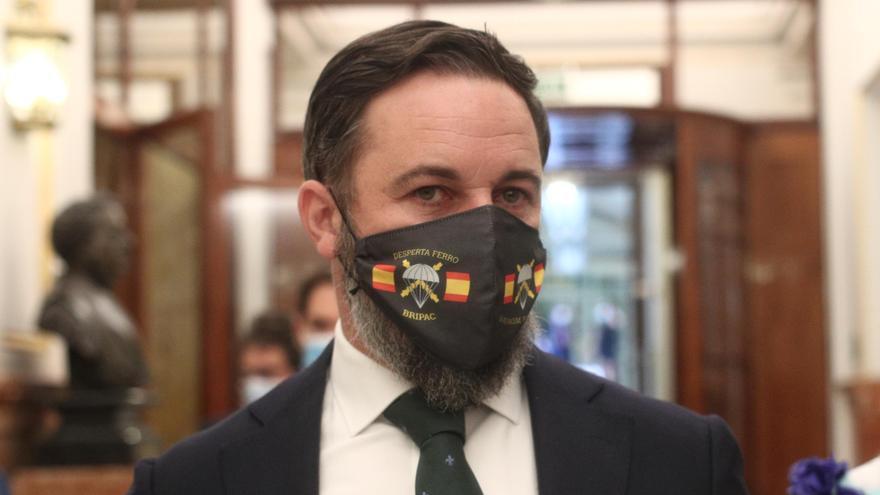 Santiago Abascal preheats the atmosphere of motion of censure against Pedro Sánchez that still has no date despite announcing it as “urgent” before going on vacation and he tries to bring together everything that is opposition to Sánchez around his party. And within that all has decided to include these last hours to the supporters of the Franco regime, to whom he winks every other day.

In his first duel with Sánchez, he affirmed from the platform of Congress that Pedro Sánchez’s “socialcommunist” government is “the worst that Spain has had during the last 80 years”. The message, unpublished in the parliamentary sessions of the last decades, has not only managed to raise the spirits of his parliamentary group, which applauded him enthusiastically, but also seeks to unleash a wave of sympathy among the ultra groups that Abascal feeds with his interventions on the unity of Spain, the criminalization of immigrants and lately also on the occupation of houses, which it tries to turn into one of the central problems of the country, despite the fact that no statistics support this thesis.

Upon hearing his intervention, Sánchez wanted to believe that such assertions constituted “a slip” by the leader of the extreme right and replied: “What you have come to say is that you miss some of the governance formulas in our country that have been fortunately overcome.” The Prime Minister reminded him that a Democratic Memory Law is being prepared for which it is going to “prohibit and outlaw foundations that defend the Franco dictatorship”, such as the Francisco Franco Foundation, with which Vox maintains ties.

To make it clear that it was not a “slip”, Abascal later reaffirmed what was said. First, in his Twitter account in which, through a thread, I reel off his theory. “Neither lapses nor milk”, “is the truth that hurts so much”: “The worst government in 80 years. Formed by corrupt socialism and totalitarian communism, boosted by the separatist coup and terrorism”, and warning that “no they will shut us up. ”

And 24 hours later, Abascal raised the ante for an interview with the new TVE program, ‘La Hora de la 1’. The leader of Vox reiterated the accusation to Sánchez and taking advantage of the presence on the set as a gathering of José María Lasalle, Secretary of State in the Government of Mariano Rajoy and former deputy, like Abascal of the PP, said the worst Government “in 800 years” was that of Sánchez and “the next worst was that of José Luis Rodríguez Zapatero” and then “that of Rajoy”.

Abascal wanted to emphasize that his statements did not imply that he was defending “any type of authoritarian and undemocratic regime” but he made it clear that the governments of Spain between 2004 and the present day were worse than those of the dictatorship. “Those who want to convert Spain to a totalitarian regime are those of Podemos and Iglesias,” he said. When a journalist asked him if he was saying that with Franco people lived better, the leader of Vox drained the question and limited himself to replying: “What I consider is that with the PSOE we live very badly, it leads us to ruin and death. division of Spain “.

The truth is that Vox has always opposed everything that involves ending the vestiges of Francoism. Not only does she ask for the repeal of the Historical Memory Law, but she strongly opposed the exhumation of the remains of the dictator of the Valley of the Fallen. In an interview with RNE in October 2019 Santiago Abascal affirmed that with this decision “he only wants to confront the Spanish” while warning that in reality the ultimate objective of this Government is “to overthrow Felipe VI”, a theory that he continues to maintain.

That same month, shortly before the coffin was transferred to the El Pardo cemetery, Abascal returned to Vistalegre to celebrate the first year of Vox’s irruption into national politics and in a fiery intervention he regretted: “They want to unearth a dead person against the will of the family and avoid the family to bury him where they want, “he said, while some of the attendees defended this position under the cry of” the Valley is not touched. ”

This rejection does not surprise anything considering that On the Vox bench sit several retired ex-military men who have praised the dictator Francisco Franco, whom Abascal signed for the April 28 election lists. It is about the Marine Infantry Brigade General Agustín Rosety Fernández de Castro, who headed the Cádiz list; and the Major General of the Army Alberto Asarta Cuevas, who led the one in Castellón. They both signed the manifesto entitled ‘Declaration of respect and reparation to General Francisco Franco Bahamonde‘which was made public in July 2018 with the support of 181 military personnel. In this letter they denounced an “infamous campaign” that in their opinion was being carried out by “the political left” to discredit the dictator through the “perverse pretense” of exhuming his remains from the Valley of the Fallen.

In the manifesto, a strong defense of Franco’s virtues as a military man is made through a review of his entire career and it is argued that the dictator was a man “disciplined, subordinate and always concerned about the soldiers at his command”, therefore that he always lent himself to choosing the positions of “greater fatigue and risk”. Abascal has never disavowed his two deputies for adhering to that initiative.

The links of several Vox leaders with the Francisco Franco Foundation are known. Another of the group’s deputies, Juan José Aizcorbe, collaborates in it as a columnist and attended a mass in memory of Franco and José Antonio Primo de Rivera in which the attendees ended up singing the Face to sun with his arm raised in the fascist style. Abascal himself is a close friend of some of the dictator’s relatives, such as his great-grandson Luis Alfonso de Borbón, who is honorary president of the Foundation. The journalist and writer Mariano Sánchez Soler recounts all these connections in The Franco SA Family (Roca Editorial): Not only are there members of Vox who are members of or collaborate in the Francisco Franco Foundation, but there are also “relevant positions in the party whose companies share headquarters with Francoist associations.” “That connection is very clear and it is a connection that gives them many votes,” said the author. in an interview on elDiario.es.

Some news that point to the economic aid that the far-right formation would have received from the Ultra Foundation have ended up causing internal crisis at Vox. This is the case of León, where the then president of the province manager, Carlos Portomeñe, assured that he had received the commitment of the Foundation’s patron, Jaime Alonso, to finance the party from this body. That conversation was unveiled by Cadena SER. According to these audios, Alonso offered the support of business friends, including José Luis Ulibarri from León, to improve the treatment of Vox in the media. The case ended in March last year with the dismissal of Portomeñe, the appointment of Elena Merino as the new president of the management commission, and with a large-scale flight of militants, according to the leaders of the formation itself.

But Abascal’s statements last week go beyond defending or not defending the opportunity to transfer Franco’s remains from the Valley of the Fallen to a private cemetery: there is no precedent that the leader of one of the main political parties Launch the message that the dictatorship governed better than the PP and PSOE governments for 16 years.