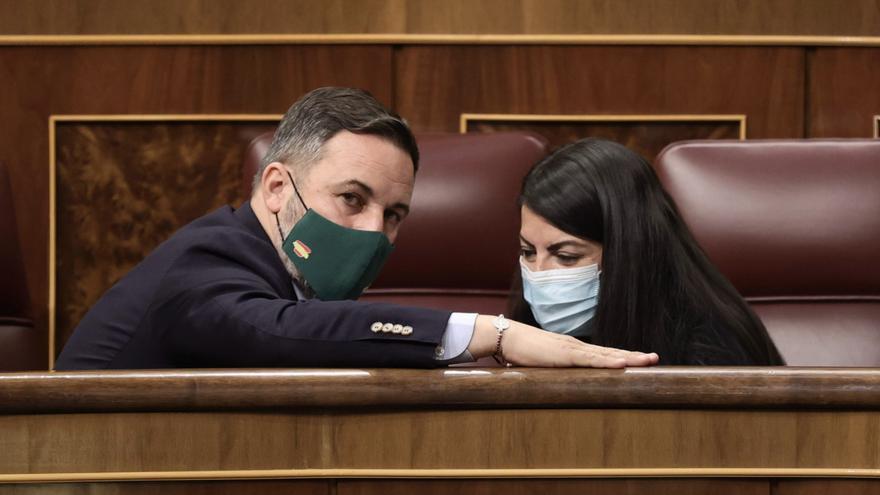 The number of statements by Donald Trump in which he has questioned facts confirmed by science about the pandemic is quite high, but there is one issue that he has not hesitated to do. It is about the advantages of vaccination. A few days ago, he was asked about the booster dose of the vaccine. Trump confirmed that he had received it, but he did not stop there. "I've seen a couple of politicians in interviews and one of the questions was: 'Did you get the booster dose?' Because they had been vaccinated. And they were like oh, oh, when the answer is yes, but they don't want to say it, because they're cowards."

In Spain, there is a politician who falls into that category described by the former US president and that is Santiago Abascal. His refusal to admit that he has been vaccinated, justified by the right to privacy, is revealing both for his lack of personal value in an issue that he believes could harm him politically and for the support that Vox arouses in a part of public opinion. Spanish. The latest polls indicate that the party led by Abascal maintains its support or could even increase its current 52 deputies in the next elections.

The first thing to say is that Vox has never opposed vaccination. A year ago, I wasn't that interested in issues of personal privacy in relation to health. In January 2021, he asked a question in Congress to know how many members of the Government they had been vaccinated and who they were. Before, in June 2020, he had presented a non-law proposal to request "the mandatory imposition of vaccination in children aged 0 to 16 years", referring here to all vaccines, above what their parents might think. Two weeks later, he withdrew it.

Everything began to change when her deputy Macarena Olona announced in July 2021 on Twitter that she had been vaccinated with a photo included and received a torrent of attacks from anti-vaccines. Some did not hide that they were followers of Vox and that they felt very disappointed. "This photo breaks my heart. I did not expect it," said one of them. Another showed Olona a pin from the 2030 Agenda as a way of reproaching her for having surrendered to the "globalist agenda" that Vox usually denounces. The level of paranoia of some responses was very high: "Could anyone assure and affirm that politicians have been injected with authentic vaccines? Who can know? Nobody."

Vox took note and proceeded to protect its leader from any controversy. A couple of months later, there was a bout of civil war on the far right. Federico Jiménez Losantos asked Abascal in an interview if he had been vaccinated. "I'm not going to answer that question," was the reply. The journalist called him "irresponsible". Abascal tried to escape from the controversy by saying that he was against compulsory vaccination, a measure that no government or party has requested in Spain as it is considered unnecessary.

Infuriated by the attacks he received on social networks, Jiménez Losantos summarized in later days the influence of anti-vaccines in Abascal's party. "There is a collection of psychopaths who have put themselves in the shadow of Vox, who have to kick them out, exterminate them," he said on his radio show. "The scum must be swept up, the rubbish must be removed, and the rats and cockroaches must be exterminated," he said with his usual predilection for insults. He also referred to "Abascal's personal cowardice."

Regardless of what they are called, they are also votes that Vox is not willing to give up. In all parties, voters who support vaccination in Spain are a clear majority, also in Vox. But Abascal's party is the only one that in 2021 had a significant percentage of voters who rejected it, around 15%, according to the CIS.

The party presents itself as the enemy of everything that rejects its voters. Appeal to those who are against the world as we know it. Against a fictitious EU conspiracy to increase the number of immigrants. Against women who claim their rights. Against the UN and its "globalist agenda". Against those who want to take immediate action to reverse climate change. Against the autonomous State in Spain. Against journalists, although they prefer to ignore the fact that several media outlets give them favorable or at least not particularly critical coverage.

The slogan "only Vox remains" sums up that strategy. His is a protest vote against everything that is only represented by Vox.

He also opposes the use of the Covid passport because he considers it "a savage curtailment of rights and freedoms", in Olona's expression. The Vox deputy said that it only exists in European countries where the percentage of vaccination "barely reaches 30%-40%", which is false. France and Italy have approved it. In Spain, thirteen of the seventeen autonomous communities have it in force as a requirement to allow entry into public places such as bars, restaurants and cinemas. To do so, they have the approval of their superior courts of justice.

Some newspaper headlines have pointed out that the Covid passport has not served to stop the sixth wave caused by the Omicron variant, although in reality that could not be its objective, once it was known that the vaccinated could also infect. The passport is basically an incentive to convince skeptics of the advantages of immunization, in short, to force them to take that step.

Like Vox, far-right parties in Germany, Austria, Belgium and the Netherlands have encouraged the idea that the pandemic it has been used by European governments to limit individual rights. That denunciation did not serve the ultra AfD party very well in the German elections in September, where it fell from 12.6% of the votes obtained in 2017 to 10.3%. On the contrary, radicalization is paying off in the polls for the FPÖ party in Austria, which has doubled its voting intentions in the last year.

Faced with the reality that the vast majority of the Spanish population supports vaccination, Vox has chosen to focus on denouncing the government's legal response to the pandemic. The Constitutional Court granted it a clear victory by ruling against the declaration of the state of alarm in March 2020, but many other appeals of the party in court have failed.

In the symbolic field, he has preferred to keep Abascal's vaccination secret. It's a way of telling anti-vaccines that you're not exactly like them, but that you understand their position and would be happy to have their support. What science says is secondary.