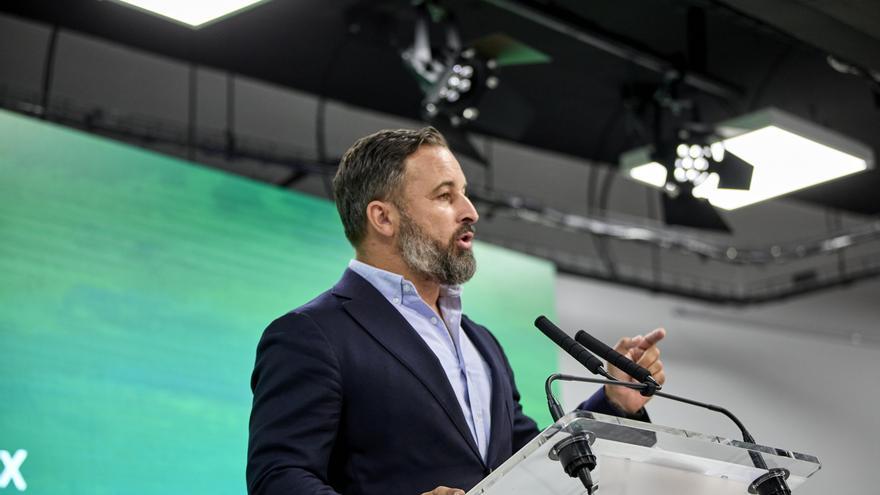 The PP bleeds and crumbles. And in Vox they have sat down to see the unexpected film with surprise and some concern. But the leaders of the far-right party, with Abascal at the head, have opted for prudence and have not wanted to make firewood from the fallen tree just at a time when all the polls point to a strong rise in all of Spain and They are also immersed in negotiations to reach an agreement in Castilla y León with the PP, where the acting president, Alfonso Fernández Mañueco, depends on them to continue governing.

"Hopefully the PP crisis will be resolved soon (...) What is bad for Spain is bad for Vox," Santiago Abascal said last Friday on Twitter. A message that he reiterated on Monday in an impromptu appearance after learning that Pablo Casado had been forced to summon the party leadership to set the date of an extraordinary PP Congress where his replacement will be resolved. Not a single thick word against the one who has been his rival until now, but against Pedro Sánchez, whom Vox and some right-wing media see behind the espionage scandal against the regional president, which has also fully affected the City Council of Madrid and its mayor, José Luis Martínez-Almeida.

Almost the same words that Abascal pronounced the next day from the Iván Espinosa de los Monteros Congress. Vox's parliamentary spokesman assured that they want to be "respectful" and not intervene in the internal controversies of what remains their main electoral rival now that Ciudadanos has practically disappeared. A strategy that other Vox leaders have maintained throughout all these days. Among them, the spokeswoman in the Community of Madrid, Rocío Monasterio, who announced that she was not going to talk about "the internal problems of others" and limited herself to saying that "the scuffles and machetes in Genoa 13 will not solve the problems of the people of Madrid Along the same lines, the national spokesman, Jorge Buxadé, also declared himself, who, however, demanded "transparency with public money."

Although the communication channels between Abascal and Pablo Casado were broken, especially since the leader of the conservative party attacked him fiercely during the debate on the motion of no confidence that he presented against Pedro Sánchez, his abrupt end has impacted the leaders of Vox, as well as the rest of the deputies of all the groups in the lower house.

The imminent disappearance of Casado as president of the party now creates uncertainty about the future of relations between the two parties. In Vox they believe that it is necessary for them to reach agreements, especially after the general elections of 2023 to stop Pedro Sánchez's PSOE. That is why they wish the PP leaders to fix their problems soon. "The weakness of the parties that have to be part of an alternative makes that alternative difficult," acknowledged both Abascal and his spokesperson in Congress in their respective appearances.

In Vox they see the hypothetical and almost certain replacement of Casado by the Galician Alberto Núñez Feijóo with pros and cons. On the one hand, as good news, because they consider that this would allow them to continue growing among the most radical electorate. But, on the other, Feijóo has always boasted that thanks to him "the extreme right has not yet managed to enter Galicia." And his belligerence and equidistance from Abascal's party has always made it very clear. After the elections in Andalusia, where the PP had to accept for the first time a pact with the extreme right in order to govern, Feijóo stated: "This electoral phenomenon has no place in Galicia." In fact, in the Galician regional elections of 2020 Vox did not get representation in that community. Those of Abascal obtained 26,797 votes, which meant only 2.05% support. The PP baron swept again achieving his fourth absolute majority.

But now the landscape has changed and the extreme right has gained a foothold on the political board, as has been shown in Castilla y León, where Vox has gone from having one prosecutor to having 13. There Fernández Mañueco is seriously considering letting Vox in in the regional government, as required by the far-right leader Juan García-Gallardo to support the investiture, something that Casado opposed. The power vacuum in Genoa now pushes him to that scenario if he does not want new elections to take place in the region now, a scenario that in the current circumstances no one wants in the PP.

For those of Abascal, the fact that the president of Madrid, Isabel Díaz Ayuso, has left it said that -for the moment- she does not aspire to lead the PP at the national level has also reassured them. They know that she does represent a real "danger" as an electoral rival, although not as a political interlocutor. She already proved that she is unbeatable in the capital. But at the same time, the internal power that Ayuso has achieved in this crisis also paves the way for that future pact between the two parties to unseat Pedro Sánchez and his "Frankenstein government" with "separatists and nationalists." That "alternative" is the one that Abascal has been demanding from Casado without the until now leader of the PP picking up the glove in his obsession to dispute the same electoral space, convinced that in the next general elections he would become president of the Government

With Ayuso, the Vox leaders have always maintained a good relationship, especially after the electoral repetition of May last year. The regional president managed to close this time with Rocío Monasterio the budgets for Madrid, while the City Council turned its back on Almeida, who was forced to settle accounts with the dissidents of Más Madrid, the group "communist", as Javier Ortega Smith calls them. So now they have decided not to attack her for the scandal in which she has been involved, when the case of the contract with a company linked to her brother and the collection by him of a large commission for it news that advanced elDiario.es. Moreover, Vox has been quick to defend his presumption of innocence.

Nor have they wanted to take sides in the face of the alleged espionage that Ayuso has suffered from the City Council, which has already The head of Ángel Carromero has been claimed there and has put the mayor himself on the ropes, who has also ended up leaving the spokesperson for the PP. Almeida has also had to put up with the scolding of Begoña Villacís, his government partner, to whom he did not inform or know that the scandal was going to break out.

While all the municipal groups -including Ciudadanos and the PP itself- voted last Tuesday in favor of creating an investigative commission in the Madrid City Council to clarify the facts, Vox abstained. The same attitude maintained this Friday during the urgent and extraordinary plenary session in which Almeida has been forced to appear again. The most they have come to has been to ask that "the truth be known" preferring to direct their darts against Moncloa by assuring that "responsibilities must be purged to know where those private data have come from" that municipal officials were supposedly looking for about the regional president.

The amazing thing is that despite assuming a fairly obvious case of corruption, the Madrid leader of the PP has come out stronger from that battle. And those of Abascal see in it a good opportunity so that in the future it influences in favor of that great alliance between two political forces, "which despite maintaining different ideologies, are compatible." This was recognized in that Abascal appearance, in which he warned that "the time of absolute majorities has passed."

Now, given the panorama and the decomposition in which the PP has plunged, in Vox they already caress the idea of ​​achieving the surprise of the conservatives. Some of the latest surveys certify this. However, outside Abascal's doors, he assures that they are not "in a battle against the PP, but against Pedro Sánchez", while pointing out that "the only surprise that interests us is the surprise to the Socialist Party." "We look to the future with hope because we can be the first party of the Spaniards", reiterates again and again the president of the extreme right-wing party.

At the moment, the forced withdrawal of Casado leaves Abascal free to exercise in Congress as leader of the opposition, a role that he has always longed for in the face of the "cowardly right-wing" that in his opinion the party has represented under the leadership of the successor of Rajoy. So the strategy from now on is to focus on continuing to erode the Sánchez government and continue defending his proposals, letting Casado continue with their internal messes as long as necessary.

This Wednesday the still president of the PP said goodbye during the control session to the Government without asking the planned question to Pedro Sánchez. Casado limited himself to stating that he understands politics "from the defense of the noblest principles and values, from respect for opponents and dedication to colleagues, all to serve Spain and the cause of freedom." "This is the future of our children and that we must all build together," he said. The president of the PP left the hemicycle shortly after along with the three faithful leaders that remain: Ana Beltrán, Pablo Montesinos and Antonio González Terol. An image that perfectly reflects the loneliness in which he leaves.