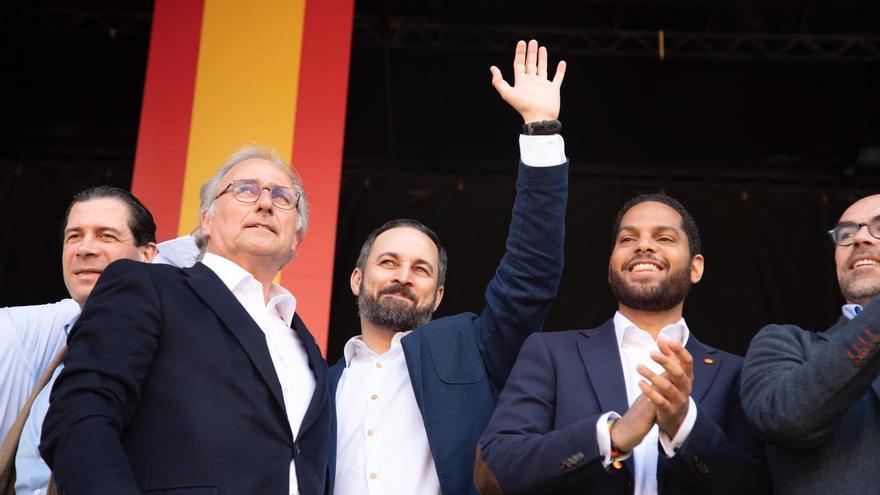 Santiago Abascal has revealed this Sunday that Vox will register the motion of censure against Pedro Sánchez that he announced in late July in Congress and that he justified by the “criminal management” that the Government has made in the face of the Covid-19 pandemic. In an interview on the program ‘La España Viva’, on El Toro TV, which has been preceded by a long propaganda report on the parliamentary activity of the ultra-rightist formation, Abascal has also announced that “except for last minute changes”, he He will be the alternative candidate for the presidency of the Government and, therefore, will rise to the rostrum to reel off his Government program. “It is a motion that is more justified than ever”, “we comply with our obligation by denouncing the degradation to which Sánchez has led us,” he said.

In addition, Vox has decided to promote its candidate to the Generalitat, the deputy for Barcelona Ignacio Garriga, who will be the one who comes up to defend the motion, something that the Congress regulations allow. The party leadership has played into confusion these days and has led to believe that by not having achieved a “consensus candidate”, as they claimed to be seeking with great interest throughout this summer, the protagonist of the motion would be Garriga. The deputy announced on his Twitter account that it will be “an honor” for him to represent the “52 [diputados] of Vox “. The parliamentary spokesman himself, Iván Espinosa de los Monteros, in one of his last press conferences, assured that they had not yet decided if Abascal would be the candidate for Moncloa, waiting to see if they could achieve an “independent” who wanted to give that a “brave” step to represent and “give a voice to millions of Spaniards” whom Sánchez has harmed with his “disastrous management” of the pandemic. Although the Vox spokesman assured that the leader of the far-right formation was never going to shun that responsibility, he specified that he did not necessarily have to be the candidate.

The leader of the far-right formation, according to Espinosa, continued “with the door of his office open” until the last moment, waiting to see if someone would take that step forward, if “an independent” would emerge who was not active in a political party and accept the bid. Failing to do so, it will finally be Abascal who will run as a candidate.

This same Thursday, Ignacio Garriga was still playing forgetfulness and in a interview granted to the newspaper El Mundo, When the journalist asked him if Abascal was going to be the candidate, he replied: “We have the best possible candidate, which is Abascal. But it has not yet been decided. The purpose of the motion is to kick Sánchez out, not to reinforce Vox.”

Now it is clear what role each will play in an initiative that is doomed to failure. This distribution of roles will give the two the opportunity to star in the debate together in which they will make an amendment to the entire management of the pandemic of the bipartite government of the PSOE and Podemos.

It will serve Abascal to try to show that “Vox is the true opposition party” and not Pablo Casado’s PP, who, as he has recalled on several occasions, has scorned the possibility of leading a “so necessary” motion. They are not even willing to support it, although they will most likely opt for abstention. Nor is Citizens going to support it. In Vox they think that Inés Arrimadas is Sánchez’s “accomplice”.

And for Garriga it is a good opportunity to boost his figure as a candidate for the Generalitat on the eve of regional elections that will not take long and after which Vox could enter the Parliament with four deputies. That is why Catalonia, the pardon to the nationalists that the Government is already processing, and the proposal by Vox to outlaw the parties that defend independence, will be one of the axes of Garriga’s speech.