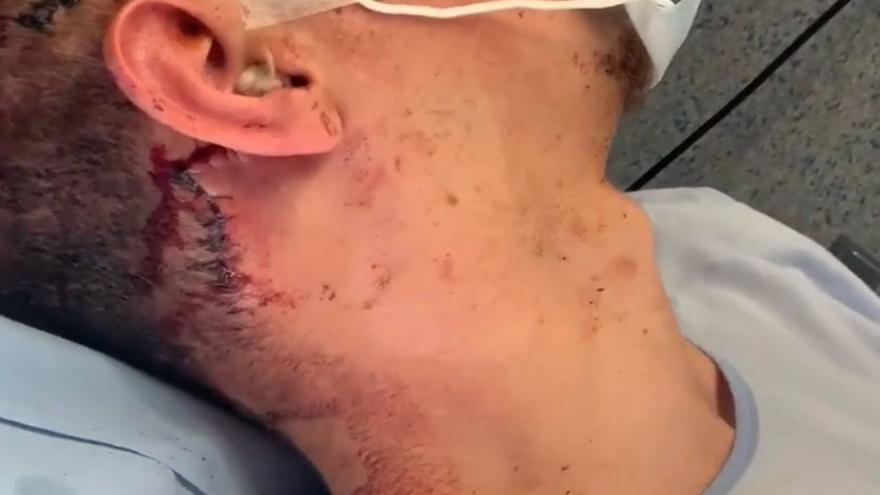 Thirteen hours in the hospital. Seven stitches per head and neck. Punches and a glass smashed against his neck. A young man has denounced this weekend a new homophobic aggression, this time in a nightclub in Oviedo where, according to his story, three unknown men beat him up after calling him a “shitty fagot” while he was dancing with his friends Friday night.

Kevin Rubio, 21, a nursing assistant, had a company dinner this Friday with all his co-workers. At the end, she decided to extend the night with a group of colleagues and friends. They went to the Metropolis nightclub, on Mon street, one of the busiest in the night of Oviedo and they were located at the end of the room. “Little by little it filled up and then everything went very fast. Three boys started pushing me, a couple of times. I told my friends not to do anything, but they asked them if something was wrong. They just looked at me” , he relates in conversation with elDiario.es.

Then “they began to whisper and we heard them say” this shitty fag “. Then they pushed me harder and when I turned around each one punched me and the third hit me with a glass on the neck,” he continues to explain. At that moment, both he and his friends left “running” from the premises. “We were all in shock,” he says.

The local has confirmed the attack and affirms that it is “at the total disposal of the police” and that it is “working on viewing the recordings of the security cameras.” In addition, they assure: “We have already contacted the victim of the aggression to offer all our help”. “The doorman is at the entrance and when he left he asked us who it was, but we were all in shock, I was full of blood and at that moment we could not say who they were, only that they were inside,” says Kevin, who quickly went to the Hospital Central University of Asturias (HUCA), where he stayed for thirteen hours, according to his account.

The young man indicates that he has filed the corresponding complaint with the police this Saturday. “Several of the policemen were freaking out. They wrote down everything and told me that they were going to do everything possible to look at the local cameras,” he said.

Through his social networks, the young man has lamented that “it is really sad that in the XXI century you cannot be dancing and having fun peacefully with your friends. It is shameful that instead of moving forward, society is going backwards and that these things increase “. From his Instagram account, Kevin has published a message, which he has accompanied with photographs and videos showing his injuries, in which he asks “any type of information about the people of Oviedo who have been in the pub that night to to be able to identify the aggressors “.

The President of the Principality, Adrián Barbón, has affirmed through his Twitter account that “hate speech is responsible for hate crimes” and has shown his “total support and solidarity” with the young man and his “resounding condemnation of The agression”. Barbón has affirmed that “Asturias must say enough”.

This complaint comes a month after another homophobic attack that occurred in Asturias. In the early hours of Monday, November 1, a 27-year-old man had to be transferred to a health center after being attacked by a group of strangers, again shouting “fag shit.” Some facts that motivated a rally against LGTBIphobia in Pola de Siero, where the complaint investigated by the police took place.

According to data from the Interior Ministry, hate crimes increased in the first half of 2021 by 9.3% compared to 2019, the last year without restrictions due to the COVID-19 pandemic. From January to June of that year, 558 infractions were registered under this typology. This year, the first six months leave a tally of 610 complaints for hate crimes.

The second semester began with the murder of Samuel Luiz in A Coruña, beaten to the cry of “fucking fag.” An event that caused massive protests in several cities in Spain and that served to make visible the violence suffered by LGTBI people.