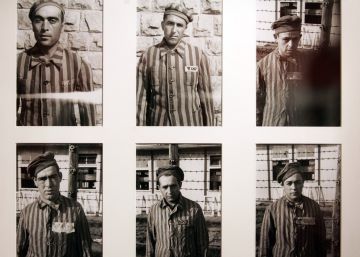 Sneaking up and playing their skins, three Spanish prisoners in Mauthausen, where they were assigned to the offices of this Nazi death camp, managed to get the documentation of the compatriots with whom they shared hell. Those papers, transmitted by the survivors, have been fundamental for, 75 years later, the website they presented this Thursday, at the Cervantes Institute, the Secretary of State for Democratic Memory, Fernando Martínez López, and the historian Juan Manuel Gascón, of the Amutic Association of Mauthausen and other fields. The page (https://fallecidosenloscamposnazis.org) collects personal data and, where possible, a short biography of the 5,258 people who died, of the 9,000 deported from France between 1940 and 1944 to the different fields of Nazism.

An example is that of Joaquín Moya Braulio, born in Ejulve (Teruel), in December 1900. His peasant family moved to Sant Cugat del Vallés (Barcelona); He was a stoker in a ceramic factory and was a member of the Marxist Unification Workers Party (POUM). He fled Spain in early 1939, but the Nazis arrested him in May 1940 in France. He died on October 15, 1941 in the Gusen camp.

Martínez explained that this database, "the most complete in terms of dead people", arises from the Historical Memory Law which was approved in 2007, during the Government of José Luis Rodríguez Zapatero, and recalled how thousands of Spaniards, who had left for France before the advance of Franco's troops, were in refugee camps in the south of the Gallic country and then enlisted in the Companies of Foreign Workers. Its destination was, above all, the defensive construction of the Maginot line, along the French border with Germany. However, about 7,000 fell into the hands of the Nazis when they took France.

The other 2,000 - until completing the 9,000 deportees - did not fight with spikes and shovels, but with weapons because they were in the French Resistance and were captured from 1943. Finally, there was a small number of "Jews with Spanish nationality, in mostly women, "added the secretary of state. Everyone was identified in Mauthausen with a blue triangle sewn to their clothes.

Calvo Gascón explained the operation of the web Mortal victims of the Nazi camps, whose sources have been relatives of prisoners, associations, historians ... The page contains a database in which people can be searched by name and surname, date and place of birth, date of death and field in He who died This investigator, who belongs to the board of the Amical association, said that the data belong to fatalities between August 1940 and 1945, the period of which they have proof of deaths and that, after a debate in their organization, it was decided to leave out to those who lost their lives months later, as a result of the subhuman conditions suffered in the fields.

The cold data shudder. Mauthausen was the main point of extermination of Spaniards: 4,758 fell there. A long distance away, Dachau, with 138. Another quick consultation on the web, for months, lets you know that the winter of 1940-1941 was the most dramatic moment, with almost 2,400 victims. The dead have also been classified by age, which certifies that there were also children: one with 7 years and one with 8. "They were probably Jews and had arrived there with their mothers," Calvo added, "although children were also born in those places ". The bulk of those who did not return were between the ages of 22 and 40. The oldest of all was 71.

In addition, a check can be made by the places of origin. Catalonia was the most affected, with 1,169 deaths recorded (in Barcelona, ​​576), followed by Andalusia, with 1,002. The most punished Andalusian province was Malaga (152).

The act of presentation was attended by relatives of a victim, who recalled the role of Franco's diplomacy, especially in France, so that those Spaniards finally ended up in death camps. A fact that Calvo resumed to warn that the presence today in the Spanish political life of the extreme right seeks to provoke, "through motions of political parties, the confrontation between victims, Jews and Spanish Republicans, as if they were to different categories. "