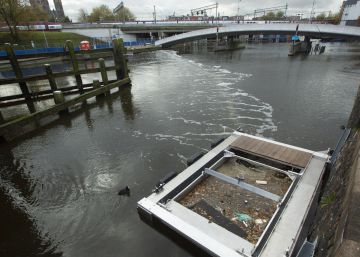 It rains heavily in Amsterdam, but the water curtain does not tarnish the premiere of The Great Bubble Barrier, the first in the world to be deployed to pick up the plastics of the channels. It is not a compact obstacle, but the bubbles result from the compressed air injected into a 60-meter tube, perforated and planted diagonally at the bottom, which generates a vertical flow capable of propelling waste to the surface. The current thus created takes them to the edge, for collection before they end up in the North Sea. Presented on Thursday at the Western Pier (Westerdok), in the Dutch capital, the experiment has emerged from a start up which has the support of the City Council and the Regional Water Company.

Once formed, the bubble screen looks like a seam that crosses the water of channels associated with the luxury of the Golden Age merchants, but they also accumulate all kinds of urban garbage. On a small floating platform installed next to the edge, bags, bottles, trays and containers of fast food, ice cream or yogurt, and also a can are crowded together. “As the tube is arranged diagonally, the current of the water column brings the plastics to the edge of the channel. Amsterdam, like most European cities, has a large river, in our case the Ámstel, which feeds the canals, and we have chosen the Westerdok pier because it is one of the six departures on the way to the North Sea, ”says Francis Zoet , head of technology of the project, and expert in sustainable energy and materials. According to the pilot program carried out before the official presentation, the barrier was able to collect 86% of the plastics that floated on the surface of the water. "The bottom ones are harder to measure yet, but in the laboratory tests we saw that our system could be done with an average of 50% of those floating in the bottom of the water column," he adds, while taking almost the I fly a plastic card that goes to the ground. "This is what happens," he says, with the chip in hand. "Not everything is thrown deliberately, there are things that go into the water without us noticing."

Francis Zoet is accompanied in Amsterdam the co-founders of the start up, Anne Marieke Eveleens, chief operating officer, and Saskia Studer, creative chief. Friends and fans of navigation, remember in their work these three essential data: “In the last decade we have produced more plastics than in the previous century, and 80% of the ocean's plastic waste comes from the land. On the other hand, 80% of the latter reach the sea through the rivers. ” Since the bubble barrier does not impede navigation or annoy birds or fish, it will remain permanently in Amsterdam for three years, and will contribute to the collection of garbage from urban waterways by public services , which includes 42,000 kilos per year of large plastics.

The three entrepreneurs, and the engineer Philip Ehrhorn, co-inventor of the barrier technology, have financial support for a three-year period thanks to the contribution, among others, of the 500,000 euros won in 2018 in the annual Green Challenge contest (Green Challenge) of the Loterij Postcode. It is a lottery played by monthly subscription, which donates 50% of its income to social and innovative works. “Although we are interested in cooperating in Europe and Asia, we first want to develop our technology in the Netherlands. However, we have already seen very disturbing images of the strawberry growing area, in southern Spain, where the land is covered with plastics that fly and end up in the river. Once there, they form a kind of onion layer in quantities that we did not expect, ”says Francis, who now discusses with his colleagues the effectiveness of the barrier in the collection of microplastics, in a wastewater cleaning facility.

From Aquarius to Warehouseman and Student