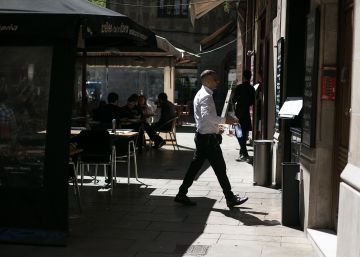 It is not because of being a waiter, delivery person or dependent, but because of the "personal circumstances" of each one. Have a shared custody it depends only on that. That is the theory that emerges from a ruling of the Provincial Court of Badajoz, which on July 9 denied joint custody of a man who works as a waiter because his "long hours" prevent him from taking charge of their children .

The mother of children under seven and ten years old -who works as a cleaner in the morning hours- asked to be granted the single parent custody after the father of the children fell asleep on "different occasions" and did not take the children to school. "It is not a class judgment, the waiters do not have veto shared custody, but in this case the father did not present before the court a parenting plan in which he made his schedule clear and the people with name and surnames that would take care of children in his absence, "explains Javier Pérez, judge of first instance of Córdoba and author of the Family Law Treaty.

From the moment of separation – the couple resided under the same roof for 10 years – the expert report prepared by the psychologists advised exclusive custody for the mother, considering that "prolonged father's" schedules would make conciliation difficult. "He acknowledged that his work does not allow him to be with the children at lunchtime and dinner and the mother would not have recourse if he had improved their schedules, but it has not been like that," explains José Antonio Romero, the mother's lawyer.

The sentence exposes some of the arguments offered by the father, who, although he admitted falling asleep, he attributed it to "an occasional episode" and considered that the mother had also "had slips." His promise that "when the time came" would "remove the obstacles" from his work to ensure full attention to his children did not convince the court. Neither does his claim that he has the support of his parents and sisters to face upbringing.
The judge considers that in a society where it is "usual for both parents to work full time" and, therefore, can not take care of all the children's needs alone, "the family or external help should be at the order of the day". That yes, "whenever it is to complete and not to replace, it must be punctual", precise. In that sense, he considers it problematic that the father "speculates" about his "future work situation".

The ruling emphasizes the doctrine of Supreme Court that considers that shared custody is the "ideal" regime because "it is the one that most closely approximates the model of coexistence that existed before the rupture", and allows the parents to "participate in equal conditions in the development of their children" . But it affects one of the points of a ruling of the Supreme Court of January 2019, in which it is made clear that in order for this regime to take place, work schedules compatible with the upbringing are necessary.

The judge sets a pension of 150 euros for each of the children, which must be paid by the father, alternate weekends and 50% holidays with each of the parents. The ruling, which is firm and against which there is no recourse, considers that joint custody is not exclusive to the unemployed or workers with flexible hours, but emphasizes that the welfare of the child must always prevail.

At the end of 2018, the mother of the two children had another child with their new partner. In his brief to recover single-parent custody, he said that sharing parenting with the father "would mean separating the children from their new siblings." An argument that the Pacense court does not mention in its ruling. "Article 92.5 of the Civil Code and 39 of the Constitution provide that care shall be taken not to separate the brothers from a double bond, those who share a father and mother. When one of the two parents is not the same, you can not use that argument, there is no legal support ", explains Javier Pérez, judge of first instance of Córdoba. "That element has not weighed and in no case could it be used in his favor," he adds.