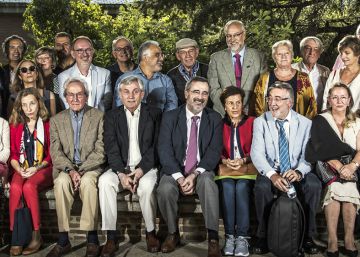 Javier Muguerza he died on April 10 of this year and yesterday they met at the Student's residence, in Madrid, a lot of colleagues and friends to remember the work and personality of one of the reference figures of 20th century Spanish philosophy. The act had a huge ambition. In the program, 12 people were announced to introduce the philosopher and 18 others who were going to take care of some aspect of his work and his personality.

If the irresumible were to be summarized, the first part of the event dealt with its most academic and institutional aspect, and, therefore, those who have or have had some relationship with the centers where their personality left a deep mark: the University of La Laguna, UNED, the Institute of Philosophy –linked to the CSIC-, the Student Residence or the magazine Isegory, to which he was intimately linked.

There was also talk about the legacy of Javier Muguerza, his library and his papers, which have gone to the University of La Laguna, in Santa Cruz de Tenerife, which will be responsible for disseminating it and making it available to scholars.

The second part got closer to the person. It is difficult to account for all the nuances, anecdotes or episodes that were reminded of Javier Muguerza. A man who believed in philosophy. An open mind, innovative, with universal vocation. A thinker anchored in tradition and open to all innovations. He talked about his dialogic and antidogmatic mood. Of his radical commitment to the institutions where he worked. He stressed his condition as a disorderly person and the enormous passion he put into everything he did.

Muguerza's friends again and again highlighted yesterday the enormous wisdom of the philosopher. But far from the temperance and the cold distance of the thinker, which is pronounced from the heights, what always jumped in the interventions was his torrential enthusiasm when it came to living and relating to the world. Amelia Valcárcel commented that she also had the rare gift of working wonders. "Philosophers are like a collection of cats, cats always fight," he said. "Muguerza got us to be together and talk." And he also pointed out other achievements: incorporating the philosophy that was made in exile, linking the new with the older and supporting feminist philosophers.

Muguerza was born in Coín, Malaga, on January 7, 1936, shortly before a war began that immediately left him a terrible message that would always accompany him: in the first days of the fight a group of militiamen of the Anarchist Federation Iberian, the FAI, He went through his house to take his grandfather to be tried in the capital. His five children, including the philosopher's father, decided to accompany him. All were shot. They had a good position, but never belonged to Falange, the position for which they were liquidated. So Muguerza carried the wound in Spain. And that is why he worked, when he could do it, to create the conditions for concord, to erase the cainism that led the Spaniards to disaster and, instead, seek tolerance and dialogue. Philosophy was his battlefield, and teaching. Establish the foundations to build your own way of thinking and, on the other hand, weave complicities, push the debate, open to the winds that blew strongly outside.

His first steps were strongly marked by his interest in the "linguistic turn" and soon plunged into the aggressive territories of the philosophy of language, but he was also very sensitive to some Marxist voices, such as those of thinkers linked to the School of Frankfurt or Ernst Bloch. He was strongly influenced by Kant and understood philosophy as a task that could not ignore the contradictions of the present, nothing to do with pontificating from an ivory tower. And, although he never participated directly in politics, he had the courage to defend his positions and not to escape the demands of also pronouncing himself on moral issues, in the broadest and deepest sense of the word.

In January 1958, Muguerza was one of the students who mobilized against the regime. Franco's police arrested him and he was held in the Carabanchel prison until, by the election of Pope John XXIII, he was pardoned in November of that year. Since then, the entire trajectory of the thinker was linked to the vicissitudes of the history of Spain and somehow his trajectory is closely linked to the transition.

In a man who sought consensus, it was important to set certain limits, strengthen his own gaze, the critical position: to demolish all fanaticism. Yesterday, at the Student Residence, the enormous complexity of his work were philosophers and his friends such as Reyes Mate, Javier Echeverría, Roberto R. Aramayo, Manuel Cruz, Emilio Lledó, Victoria Camps, Javier Gomá, Adela Cortina or Amelia Valcárcel between others. "He was a guardian angel," said Fernando Savater, "but also an exterminating angel."