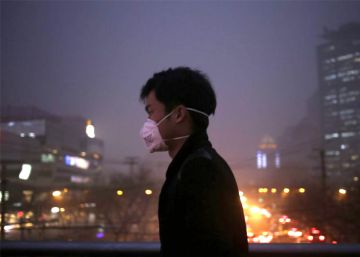 A new virus has China on alert. It is a mysterious pneumonia, from which dozens of people in the city of Wuhan have been infected and corresponding to a new strain of a coronavirus similar to the one that in 2002 caused the SARS epidemic (severe acute respiratory syndrome, for its acronym in English). This has been confirmed by Chinese national television, CCTV, according to the research of a group of scientists who have managed to isolate the genetic sequence of the infectious agent.

Medical tests have confirmed the presence of this new pathogen in 15 of the 59 cases detected since the beginning of December, all of them in Wuhan, capital of the province of Hubei. The origin of most of these infections has been located in a seafood market, where live animals were marketed. Since then, the area has remained closed and quarantined. To date, none of the patients have died and even eight patients, who no longer showed any symptoms, were discharged yesterday Wednesday. Local health authorities have ensured that no transmission between humans has been detected.

Coronaviruses, which are named after the RNA chain that surrounds them in the form of a crown, often attack the airways of mammals. To date only six were known. Four cause mild symptoms similar to those of a cold. The other two, on the other hand, are sadly famous: in 2002, the SARS coronavirus, originating in China, caused the death of more than 700 people all over the world; while in 2015 the MERS (Middle East respiratory syndrome) left 449 dead.

Given the background, the news has been received with concern in the country. "I am very afraid. I remember that the SARS appeared together before the Spring Festival and then expanded thanks to the means of transport, ”wrote a user on Weibo, a social network similar to Twitter. His words refer to Chinese New Year, which in 2020 will take place on January 25. On the occasion of this national holiday, it is tradition that people return to the family home, causing the largest human migration in the world, with more than 3,000 million displacements: an ideal scenario for the spread of a virus.

The mysterious ailment, however, could have already jumped out of the borders of the Asian giant. In South Korea, a woman of Chinese nationality has been placed in isolation from the possibility of her being infected, the Korea Disease Control and Prevention Center (KCDC) reported on Wednesday. The 36-year-old woman was diagnosed Tuesday with pneumonia, after two business trips in which among other cities she visited Wuhan. Neighboring countries, meanwhile, have begun to take extreme security measures at airports.

The World Health Organization does not consider it necessary, for the moment, to establish special measures for travelers. This was announced in a statement released this morning, ensuring that "new coronaviruses appear periodically [...] and China has a solid health system, capable of responding and managing outbreaks of respiratory infections. ” The institution, which has shown its willingness to provide technical support to the country's health authorities, has ruled that "in the coming weeks more comprehensive information will be necessary to better understand the current status and epidemiology of the outbreak."

Scientists responsible for identifying the virus have expressed themselves in the same direction, ensuring that their initial finding must be completed with further research. Although it is possible to obtain evidence of the presence of pathogens in a short period of time, the production of a vaccine can take years. Professor David Hui Shu-cheong, an expert in respiratory medicine at the Chinese University of Hong Kong, has assured the South China Morning Post that some key details such as “what animal is the source of the virus, the incubation period and the route of transmission” were still to be clarified. Some specialists, such as Peng Yihong, a professor at the Beijing School of Medicine, have ventured that the cause of the outbreak could be “the pathogens contained in karst caves, the place of origin of many of the seafood that will end up in the market” .