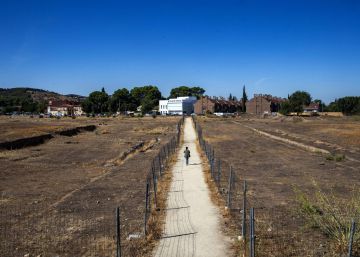 La Vega Baja, a plain crossed by the Tagus and where the Visigoths raised their capital at the foot of present-day Toledo in the sixth century, runs "danger series" for the 1,300 homes that a modification of the Municipal Planning Plan contemplates on it, according to a report by the International Council of Monuments and Sites (ICOMOS), an advisory body of UNESCO. The study, called Report on the possible impact of consolidated and ongoing projects of Vega Baja de Toledo, describes a bleak picture of a site that includes monuments and historical remains from different eras, from "prehistoric evidence" to Roman or the capital that King Teudis ordered to erect. Thus, He assures that he will report to the "World Heritage Center (of UNESCO) of the problems currently suffered by the site and the need for urgent action. Toledo is a World Heritage Site.

ICOMOS recalls that in addition to the Vega Baja, in the Vega Alta and La Peraleda (nearby areas) there is a forecast to build another 5,000 homes. The UNESCO advisory body maintains that "the brick ”is, therefore,“ the only agglutinating element of the urban landscape of Toledo and, in Vega Baja, with multiple declarations as a Property of Cultural Interest, the same idea of ​​buildability is still maintained ”, a place that qualifies as“ unique and unrepeatable. ” The international organization also attacks the current state of the Tagus. "The laziness to which the river has been subjected, aggravated in the last century, has forced to live with its back to it, its level of pollution, its shortage of riverbed and even its smell make it never be considered as it should."

The study highlights that, although urban development is legal, "it does not mean that it is the right one and the right one." "The brick is not directly proportional to the quality of life and yes it is nature, the landscape and the clean air, with an architecture and approach that are inspired and integrated into them." And it demands mediation “between interested parties in the area", to create a joint protection framework for the entire Vega Baja (now it is divided into four BICs), that archaeological excavations – abandoned in 2006 – be retained and protected monuments inside, such as the Roman circus.

For its part, the Toledo Culture Association, Society, Heritage and Culture -formed by academic and neighborhood groups- stresses that the administrations have improperly authorized urban actions in areas of landscape and archaeological protection, whose conservation obligation falls to those administrations and is part of their commitments to UNESCO, contracted with the declaration of Toledo as a World Heritage City in 1986 and renovated in 2013. ”

The subsoil of La Vega Baja, in addition to keeping remains of the Visigothic capital, treasures others from the emiral era (VIII-IX), including the road that linked the basilicas of San Pedro el Verde and Santa Leocadia de Afuera. "The most modern level is characterized by a series of architectural structures that maintain an octagonal plot," among them primada church and certain official monuments.

For its part, the Ministry of Culture, which is headed by José Guirao, a few weeks ago he requested a report from the Royal Academy of San Fernando, the Toledo City Council and the Community Board to learn about the actions that the city's cultural associations have denounced. Both the Board and the Consistory have always maintained that construction will never "affect" the deposits. But ICOMOS does not finish believing them.

Goyas 2020: Benedicta I, the one that doesn’t burn | Culture

Billie Eilish and Lizzo: the Grammy is their business