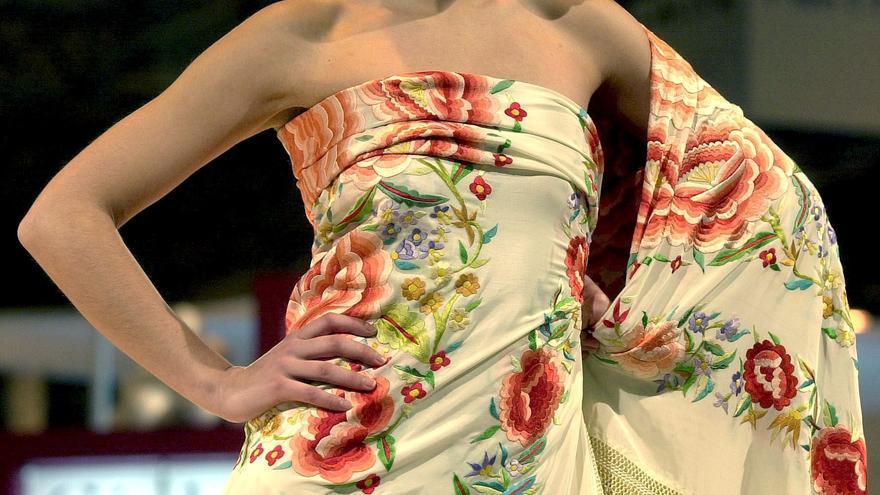 Madrid, Jul 11 ​​(EFE) .- The designers and firms of the moment change the shape and usefulness of the Manila shawl, an iconic garment of Spanish folklore, until it becomes the maximum trend, a twist from which joyful and theatrical garments emerge in current key.

Fashion editors from all over the world, Spanish firms such as Pertegaz, Duyos, Palomo Spain or Cossy and other international ones such as Dolce & Gabanna or Johanna Ortiz or the creator Nicole Camille Richie have reformulated the mythical piece this season.

Although the Manila shawl is associated with Spanish culture and its name refers to the capital of the Philippines, its origin is in China, a country that discovered silk and whose artisans were the first to embroider bamboo canes, dragons and characteristic temples from Asia with the threads extracted from silkworms.

Later they arrived in Manila and later in Spain aboard the ships that left the Philippines, when it was a Spanish colony. They soon became popular in Seville for their delicate touch and colorful embroidery.

In the metropolis, it became very popular among the wealthiest classes, but also among the more modest ones who began to sew shawls and the cigar makers used it to transport their bundles of cigars.

With good taste they began to incorporate fringes and other more cheerful and baroque embroidery that included Christian and Flemish symbols. They were so successful that costumbrist painters such as Julio Romero de Torres painted the woman covered with a single Manila shawl in 1932.

It became an exclusive accessory to display at parties and special events and were kept as true treasures, a tradition that continues to this day.

This garment continues to represent the Spanish tradition inside and outside of Spain, dressed by great figures such as Queen Letizia, who in 2004, being Princess of Asturias, wore a black and white skirt-shawl created by Lorenzo Caprile to attend a dinner in the Hispanic Society of America Museum in New York.

Now, these artisan pieces embroidered with flowers, birds or multicolored geometric motifs and finished with fringes give a stylistic twist and become attractive pieces of maximum trend worn by actresses and models such as Emily Ratajkowski, Heidi Klum, Kate Moss or Florence Welch, leader of the musical group Florecen and the Machine.

Also Spanish like the singer Rosalía, the models Inés Sastre and Laura Sánchez dare with designs with new aesthetic codes like the young designer Dominnico who without modesty or prejudice mixes the aesthetics of flamenco and bullfighting with that of the deep America of “cowboy “, giving rise to avant-garde garments that offer the image of a new and renewed Spain.

Pertegaz, under the creative direction of Jorge Vázquez, recovers the shawl and declines it to turn it into pareo-style midi skirts or wrap dresses, “a tribute to the shawl, to Andalusian fashion,” says Vázquez that his path in search of beauty puts in value “traditions and crafts”.

Throughout their trajectory, firms such as Dolce & Gabbana, Oscar de la Renta, Carolina Herrera, Jean Paul Gaultier, Valentino and Armani have studied the Manila shawl, turned it around and presented it in a modern way.

The British Jonathan Anderson, creative director of Loewe, aware of the Spanish roots of the brand, turns the silk fringes of the Manila shawl into a sensual top open at the back, and thus, this piece in a slip dress or wrap version, skirt – or as a simple accessory it is a hit with everyone’s street style. The culture of Spain inspires fashion.