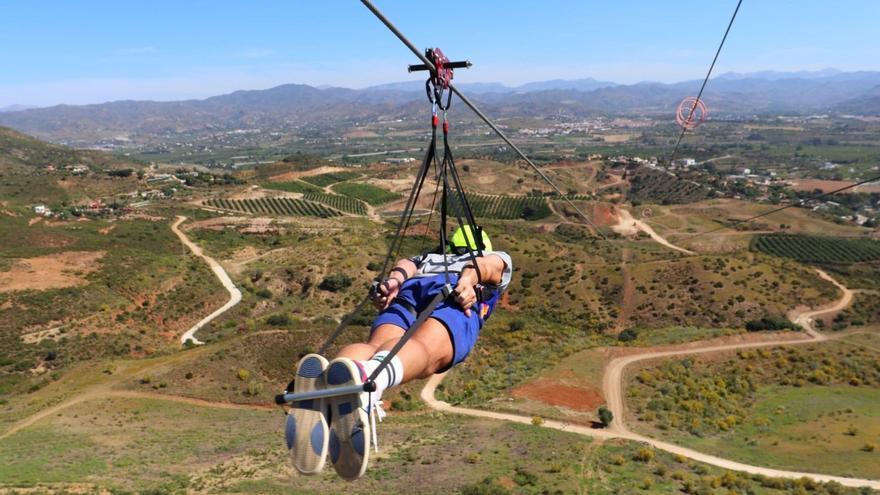 Alhaurín de la Torre (Málaga), May 15 (EFE) .- A 1,350 meter long zip line in which adventurers can reach 100 kilometers per hour in the air and emulate Superman has been inaugurated this Saturday in Alhaurín de la Torre (Malaga) and is, according to the promoters, the second longest in Spain.

The zip line, which is 210 meters above sea level, has a drop of 100 meters between departure and arrival and allows intrepid customers to launch from the “Superman” position – lying down and facing the ground. sitting individually or in tandem, with family, friends or partner.

This attraction is part of the “Sunview Park Adventure” space, open from this Saturday to the public in the Malaga town where you can enjoy views of the mountains and even the sea, before or during the flight of which is, also, the longest zip line in Andalusia, according to its promoters.

OPENING THE SOUL IN A NATURAL ENVIRONMENT

This multi-adventure company was founded by three partners, among whom is Antonio Vallejo, who has told Efe that the objective is to make customers “feel” the sensation of flying “and” freedom “while they see the landscape and He adds that it is “like opening the soul in a natural environment.”

Vallejo, who has indicated that they are studying implementing night runs to offer “something different” – in addition to horseback riding through the mountains of the town-, has assured that they have completed a project of more than seven years in which they have faced “Obstacles” such as the pandemic, which made them delay their opening by almost a year.

The word “sensations” is one of the most heard this Saturday in the space, both from the point of view of customers and the promoters of the zip line. Vallejo assures that many adventurers have launched more than once and affirms that according to them, the experience is different when you repeat and you are “more relaxed”.

From the starting point, where you can see signs on some rocks with words like “peace” -peace, in Spanish- or “freedom”, British and Spanish customers have not stopped passing from the first hour, who have not wanted to miss this experience that promises strong emotions.

A SENSATION OF FLYING THAT CUSTOMERS WOULD REPEAT

Estrella, 40, a “passionate” about zip lines and adventure, was one of the first to jump in and assures Efe that she has “really enjoyed” a sensation that, for her, has been “super pretty” and that he would “repeat a thousand times”, in addition to highlighting the safety and the sensation of flying.

Nazaret, 27, has highlighted to Efe that the first sensation when a person is tied to the harness and looks down is “very shocking”, but “once you jump” it is a “very cool” experience that would repeat ” over and over again ”, she says excitedly.

His partner, Miguel Ángel, 37 years old and who wears a T-shirt with the Superman logo – the position in which the three interviewees have launched – has expressed to Efe that the experience is “short, but intense” and has suggested to the rest of clients who enjoy the adrenaline that is released and the trip.