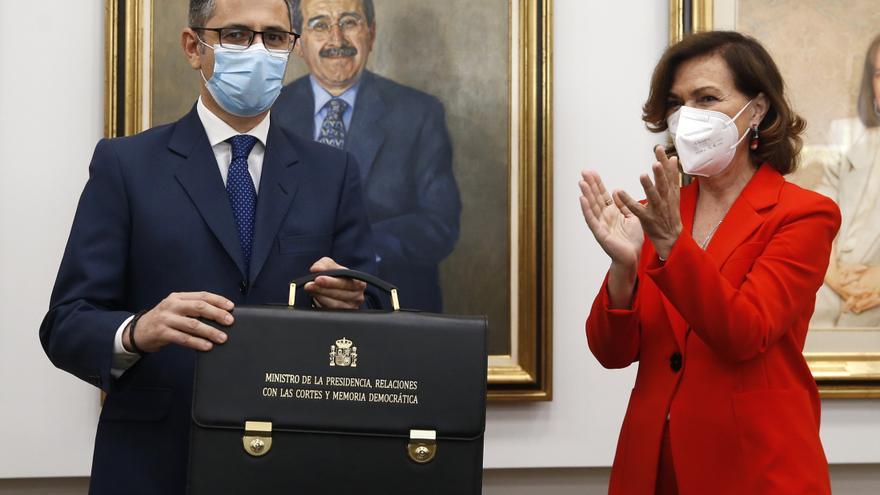 “Dear Felix, dear minister.” It was difficult for Carmen Calvo to address the one who has been her battle partner in coordinating the Government as minister during the transfer of the portfolio of the Presidency, Relations with the Courts and Democratic Memory, which she has defined as “the most loving in history.” “The times that I have been glad not to be a minister. But these things should neither be asked for nor can they be rejected,” the so far secretary of the Presidency has expressed in his speech. Journalists have interpreted the phrase as a message to the president’s former chief of staff, Iván Redondo, who left Moncloa on Friday, but in his team they assure that this has not been the case and that he was referring to himself.

The euphoria at the headquarters of the Ministry of the Presidency in the La Moncloa complex was evident. The room has become too small to receive the new strongman of the coalition. The three vice presidents Nadia Calviño, Yolanda Díaz and Teresa Ribera headed the members of the Government, among whom were also Fernando Grande Marlaska (Interior), María Jesús Montero (Treasury), Reyes Maroto (Industry), Ione Belarra (Social Rights) , Alberto Garzón (Consumption), and the newly appointed Minister of Foreign Affairs, José Manuel Albares given his proximity to Bolaños.

But there was also an important presence of socialism: from the former president José Luis Rodríguez Zapatero to the Extremaduran president, Guillermo Fernández Vara, passing the spokesperson in the Madrid Assembly, Hana Jalloul, the former minister Beatriz Corredor, the former leader of the Madrid PSOE and Secretary of State of Sports, José Manuel Franco; Ferraz workers and members of their team. There were also the deputy secretary general of the PSOE, Adriana Lastra, and the head of Territorial Coordination, Santos Cerdán, who later went to the inauguration of Ander Gil as president of the Senate, Ander Gil, and Albares, respectively. Both acts coincided with the farewell of José Luis Ábalos from the Ministry of Transport, Mobility and Urban Agenda in which, unlike in his appointment, the leaders of the management were missing. The former Minister of Health, Salvador Illa, did attend. Ábalos’ successor is Raquel Sánchez, until now mayor of the PSC in Gavá.

“Goodbye,” said Ábalos, who in Ferraz expects the resignation of the Organization Secretariat in a matter of hours and they already have everything ready for Lastra to take over all the organic power with the collaboration of Cerdán. He had no words for Sánchez, who informed him this Saturday that he was dispensing with his services both in the Government and in the party.

Ábalos pronounced a concise speech, thanking the workers and reviewing the progress made by the new minister, such as the strategic plans of Renfe and Adif. “Now I realize the hectic pace we have lived through. What was not clear to me was the impact of what we had done. It has been three years: promotion to the government after the vote of no confidence, several electoral campaigns, a pandemic … Everything has affected the Ministry, “he reviewed. “When we arrived we found an underfunded ministry and an old culture. There were structural problems. Now you have many situations unblocked and especially the European plan to distribute the first funds. It is a different scenario,” he communicated during the exchange of portfolios with the new minister.

Before saying goodbye with a “moltes gràcies”, Ábalos wanted to acknowledge the work of his team. “One is the head to hit, the one who has to deal and mediate, but without the team it is not possible. I am proud of having served Spain.”

Calvo, on the contrary, expressed “infinite gratitude” for having allowed him “to live an extraordinary learning that has not only been political but also human. The former first vice president also left a veiled message by highlighting both herself and her successor to the claim that in these three years both have worked to be “the pillar on which the President of the Government rests.”

“We are the two little ones, but resistant,” said Calvo. “I must be the minister who leaves more calm in the relief that makes Felix. The president leaves this in ministry that has important tasks of coordination in the best hands,” he insisted before reminding him that one of the tasks he has is ” bring forward a treasure “: the law of democratic memory. That rule was scheduled to pass in the second round by the Council of Ministers this Tuesday, but Bolaños will delay its approval to review it. Calvo has recalled the “hard” moments that he has lived with him in these 36 months and, especially, during the pandemic and has assured that it has been precisely in them that they have forged a friendship.

“It gives me a little respect to receive the portfolio of a vice president,” Bolaños acknowledged: “You have all my admiration, all my respect. Not only are you a great vice president, you are a great person.” Bolaños, the quiet and discreet man who has been working “in the shadow” of Sánchez for years, has finished his speech referring to him. “I know him a little, I know his convictions, his values, his principles; I know that he wants to transform Spain, I know that he wants to do it without leaving anyone behind. He honors me with his trust, he honors me by wanting me close and I the only thing What I can say is that I thank you enormously and I will never be able to do it enough to give me the opportunity to serve my country, “ended Bolaños on the verge of breaking his voice. The applause lasted several seconds and ended with a hug from her son.

In addition to the departure of Ábalos, the other surprised by the remodeling has been Miquel Iceta, who has acknowledged that he has felt “a lot” to leave Territorial Policy and Public Function, which will be separated into two departments: the first part will be assumed by Isabel Rodríguez together the spokesperson and the already exporter, María Jesús Montero, will add the second to the Treasury. The still leader of the PSC fits with sportsmanship his new destiny as Minister of Culture and Sports to replace José Manuel Rodríguez Uribes.