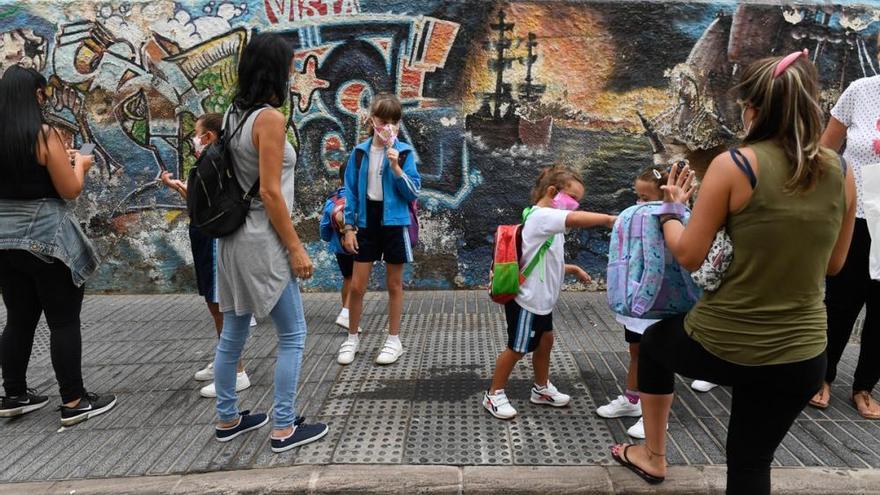 A total of 34 students in the Canary Islands have tested positive by Covid-19 since the course started on September 15, which represents 0.01% of the more than 324,000 who have started school activity, and after having activated the protocol against the virus, 69 are in isolation for having shared class with someone infected or infected.

These data have been released, at the parliamentary headquarters, by the President of the Canary Islands, Angel Victor Torres, when asked by Ciudadanos (Cs) and the Socialist Group about the start of the school year, which took place just a week ago, data that has been expanded through a note from the Ministry of Education of the Government of the Canary Islands.

Today, of the 13,000 classrooms in the archipelago, six have had to close due to contagion from one of their students, and Of the 6,000 groups for Infant and Primary bubble groups that exist in educational centers in the Canary Islands, nine have been closed, which represents 0.1% of the total. Furthermore, incidents have only been recorded in 68 educational centers, of the more than a thousand in the Canary Islands.

Ángel Víctor Torres highlighted that the Canary Islands Government has made a "important effort"With regard to the beginning of classes. Thus, he highlighted that 2,500 teachers, 402 new assistants, 18 juniors, 50 educators and 78 counselors have been added, and an investment of 120 million euros has been made.

Torres affirmed that the opening of the schools has meant that six months "of cold and silence" in the classrooms have been transformed into "life, learning, coexistence, growth, training and a right that young people, boys and girls have. to education"; However, he did not hide that it is necessary to maintain the "fear" of Covid because he is sure that new infections will occur.

The Health and Education Departments of the Canary Islands Government have carried out, since September 16, a total of 14,482 PCR tests in nursery and primary schools Las Palmas de Gran Canaria and Arrecife for being the two municipalities with the highest cumulative incidence of coronavirus in the Archipelago. This diagnostic screening, as a result of the recommendation of the Health Emergency Expert Committee, has been carried out on 12,936 students, 1,508 teachers and 38 employees of the Administration and Services Personnel (PAS).

On the part of the Mixed Group, the deputy Vidina Espino noted that the Government has obtained a "deficient" grade in relation to the beginning of the school year, and he criticized that during all these months he has done nothing more than "fall into triumphalism and complacency."

He also asked the president about the 158 million euros of the first tranche of Covid funds that had to reach the Canary Islands before the end of July, assuring that only 31 million had arrived.

In this regard, Ángel Víctor Torres assured that on July 30 he received those 158 million euros, of which Education received 87 million towards the start of classes; For this reason, he asked the Cs deputy to be more "rigorous" in the face of the "chaos" that he intends to proclaim.