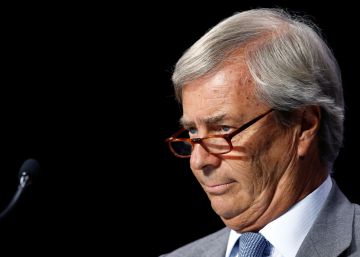 The hour was ahead. In Paris it is said that Vincent Bolloré, the twelfth fortune of France, has a clock that shows the time left until February 17, 2022. That day, shortly before his 70th birthday, the bicentennial of the family business will be celebrated that this Parisian by birth, but of Breton ancestry of which he likes to show off, he inherited in 1981 when he was only a paper mill on the verge of bankruptcy and that ended up becoming, in less than four decades, an influential multisectoral and international empire that includes investees such as Vivendi. It was, above all, the date chosen by Bolloré to announce his retirement from the business world, in which a powerful name has been carved, although often pronounced with fear or resentment – or both at the same time – due to his brutal acquisition methods, which he has come to compare with the way a boa ends its prey.

The surprise came last March, when Bolloré (Boulogne-sur-Seine, 1952) announced, almost four years before the famous date, his withdrawal from the group that bears his name and has presided over the past 38 years. The end of the Bolloré legend? Not much less.

Three years ago, in an interview with the Financial times, Bolloré described his strategy in Vivendi as that of a painter. "You may not know why there is a blue drop or a brown stroke, but in the end you will see that we are painting something relevant." Part of that final picture seems to be his move to the background, not a full retirement. It is true that his youngest son, Cyrille, 33, was at the helm of the Bolloré Group in March and has also taken up his father's position in the board of directors of Vivendi, the flagship of the Bolloré group with brands such as Canal Plus, Universal Music, Havas, Dailymotion or Gameloft and now faced with another powerful businessman, the Italian Silvio Berlusconi, for the merger of the subsidiaries in Italy and Spain of Mediaset. Vivendi – directed a year ago by another of his sons, Yannick, 39 – is the second largest shareholder of Mediaset Italia, second only to Il Cavaliere.

It's what the newspaper Le monde considers the culmination of a “dynastic succession” to “guarantee family perennity” in the conglomerate complex that goes from the world of information and multimedia to the manufacture of electric batteries for cars, palm oil or the concession of the management of several ports in Africa. The problems with the justice that he has for suspicions of corruption in his African port businesses since last year – something that Bolloré's defense reliably denies – would be, according to various media (although there is no official confirmation), one of the reasons why preferred to step back earlier than expected this powerful man and friend of powerful as Nicolas Sarkozy, to whom he lent his yacht for a vacation as soon as he was elected president in 2007.

Despite his withdrawal from the front line, that Bolloré Sr. continues to steadfastly manage the threads of his empire is something that has made clear the pulse he has with Berlusconi. And it is that not only remains a powerful shadow in Vivendi, having secured a position as "censor" or non-executive member of the board of directors. In addition, while leaving the head of the family group, he reaffirmed himself as president of Financière de l’Odet, which controls 64% of the capital of the Bolloré group and which, in turn, belongs 90% to the family.

The family appointments "do not change anything in the reality of who holds the power," a source in the Bolloré environment told the Challenges magazine on condition of anonymity. Although there was only one evidence, not finding sources willing to show up is something that often happens when journalists rummage through Bolloré's businesses.

Nicolas Vescovacci knows it well. The French journalist is co-author of Vincent, tout-puissant (Vincent, almighty), which has earned him a demand of more than 700,000 euros that the businessman filed when he had not even published the book on how to do Bolloré's business and the way, he says, managed to prevent – censorship, he calls it – in 2015 that a report on the doubtful business of a bank run by a friend in the Canal Plus chain, which had just acquired. “He is an employer criticized by his peers, few appreciate him. But nobody will say it openly because that man is scary, his power is scary and he runs his companies with a certain dose of terror, he claims it himself, ”he says in a telephone interview.

In his book, Vescovacci evokes the image of the boa. In 1999, Bolloré showed a Libération journalist a photo he kept in his office of a boa surrounding the body of a bloodied man. "It's reality. That man had the bad luck of falling asleep in the forest and was swallowed, ”said the businessman. He doesn't sleep, he's the boa, he came to say. "I have always managed to keep 51% of the voting rights of my society," he added in reference to what friends and enemies recognize as the "Bolloré method": disembark without prior notice in the company you are interested in, get enough action as to enter the council, destabilize its board and take control of the company, or sell its share with benefits, as it did with one of its most popular actions, Bouygues.

What his environment defines as a winning strategy for a visionary and tactical businessman is, for rivals such as Martin Bouygues, a pure and hard betrayal. The employer of the industrial and telecommunications conglomerate of which Bolloré, his friend from the school, wanted to take control in the late nineties, in one of his most popular acquisition operations, has not forgiven his attempt to dethrone him. When his niece Chloé married Yannick Bolloré in 2006, Martin Bouygues did not attend the ceremony. “Vincent Bolloré behaved like a bully. He messed me up, cheated on me, humiliated me. I will never forget it! ”Bouygues promised even years later.

Silvio Berlusconi wants to reorganize his empire by creating a Netherlands-based entity called MediaforEurope that brings together Mediaset activities in Italy and Spain. On his way, however, Vincent Bolloré has interposed. Vivendi, its conglomerate, is the second shareholder of the Mediaset parent company in Italy (28.8% of the capital) and opposes the operation. For this, it has undertaken a double judicial action in Spain and the Netherlands. For the moment, the Commercial Court number 2 of Madrid has suspended the agreements of the Mediaset España board in which the merger was approved. Bolloré argues, among other things, that the exchange equation (2.33 shares of the Italian for one of the Spanish) does not reflect the true value of the business in our country.

Dia deepens its crisis and closed last year with a negative net result of 790.5 million