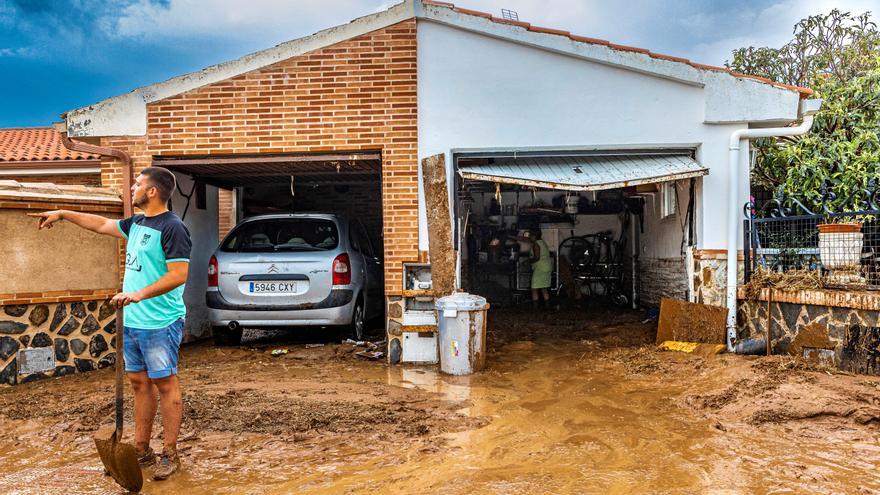 Exterior barriers, waterproof walls or storm tanks are some of the solutions proposed by a team of European researchers who have developed a platform to locate floodplain points in cities and adapt buildings to the effect of torrential rains, which are increasingly numerous due to the climate change. "If you have a house in a flood zone, there are solutions that are not expensive and that allow it to be protected from floods," says Luis Mediero, professor of Hydraulic Engineering at the Polytechnic University of Madrid and part of the team that created SaferPlaces.

The anti-flood barriers, as an example, are metal pieces that are placed on the doors of buildings and have a cost of about 500 euros. But, before reaching that point, that of placing shields or waterproofing a home, a study of possible risks must be carried out. Mediero, who has used numerical modeling tools to teach his classes at the university that were already capable of showing flood processes in great detail, acknowledges that even though they were very useful, "they had the disadvantage of computing times of hours or days. integers ". "This tool does the calculation in a minute. As it is so fast, you can do many simulations of the real climate situation and future climate change situations with different emission scenarios", he explains.

Not in all cases the use of barriers or waterproof walls can be a solution, acknowledges this engineer since, if a house is in the middle of a boulevard, the chances of saving it decrease. "If you have built on a promenade, you have a bigger problem because the water is not that it is stagnant, but that it is going to flow at a great speed and with an energy that can take away everything that lies ahead," he clarifies. However, if the case is that of a house or a chalet at a low point, the walls or exterior barriers could work. "There are many buildings that are built in areas of fluvial and pluvial flooding, and that are at risk especially in the case of flooding by storms, which are what is happening now in autumn," he explains.

This Friday seven communities continued on alert for heavy rains. In the last days, DANA has affected areas of the western peninsula and the Balearic Islands. This meteorological phenomenon usually occurs with the arrival of autumn, when a cold air pocket is isolated and static, and a hot and humid air pocket rises and collides, triggering heavy rainfall. Although experts recall that it cannot be stated with total resounding that climate change directly influences the formation of DANA, Mediero indicates that the IPCC (the Intergovernmental Group of Experts on Climate Change) concludes in the draft of its latest report that "it is increasingly evident that climate change will exacerbate the extremes of these storms, which are going to be more frequent. "

For his part, the Secretary of State for the Environment, Hugo Morán, has asked "anticipate our adaptation to climate change"And to make a" responsible use of water "to face, precisely, extreme meteorological phenomena. This was pronounced during the press conference to take stock of the summer and the autumn forecast of the AEMET.

In the same appearance, the professor of Geography at the University of Alicante, Jorge Olcina, has indicated with respect to extreme rainfall that in Spain must "pursue a sensible and prudent management of the territory" in this context of climate change that will accompany us over the next decade.

The first thing the platform does is differentiate between storm, river or coastal flooding. In some coastal points, several assumptions can be made at the same time. From there, the tool simulates volumes of water that can become stagnant and the way in which it would affect public buildings or homes. "For rain floods, what is calculated are the volumes of water that accumulate in the low points, taking into account the topography that this urban area has, the roads that the water follows and the areas in which there is no outlet and they tend to store water. They calculate the volumes, the levels, the height that the water would reach and if it would give rise to a flood, "he explains.

On the one hand, it calculates the damages based on the water heights and the types of buildings and, on the other, "it helps to try out the possible solutions." In addition to the exterior barriers or the waterproofing of the walls, it also allows us to see what would happen if a storm tank were installed, although this, more than at a private level, is usually a municipal solution. "In Madrid there are quite a few and some are gigantic, with a capacity of several hundred cubic meters, like the volume of a football field," says the researcher. "They are like an underground reservoir. It is built below the surface. It is used to store rainwater in a storm and thus protect everything that is downstream." In addition, this mechanism has another benefit and that is that it can accumulate dirt that is washed away by rainwater, which can be purified before reaching the rivers.

SaferPlaces has already been used in the Italian city of Rimini. This town is located in a coastal area of ​​the Adriatic Sea, similar to the Spanish Levante. "The problem there is that they have a river that crosses the city, big storms occur and the sea sometimes rises in level and causes problems due to coastal flooding," says Mediero. As he explains, the City Council used this tool to protect the city, taking advantage of the fact that they had already planned to regenerate the coastal area. The project, which has already executed its first phases, is called Park of the Mare.

First, they designed a dune area on the coast near the waterfront. Within the city, they bet on increasing the permeability of the area through "the creation of green areas and the use of sustainable urban drainage techniques with green roofs or landscaped areas." SaferPlaces allowed simulations to be carried out to determine, for example, how high the dunes of the waterfront should be.

However, Mediero reminds that floods are not widespread. "The most important thing is to know where they can occur, to educate the people who live there. It is important to inform, to know if the house can be adapted to those circumstances. And if it is not urbanized, not urbanize," he advises, although he says that there are also guidelines for building "flood-friendly" housing.

The project has funding from EIT Climate-KIC, an entity belonging to the European Union, which hosts projects so that urban areas can adapt and mitigate the effects of climate change. Participating in the project are the Polytechnic University of Madrid, the University of Bologna, two research centers (the GFZ and the CMCC) and two companies: the consulting firm GECOsistema and MEEO, a specialist in data computing.