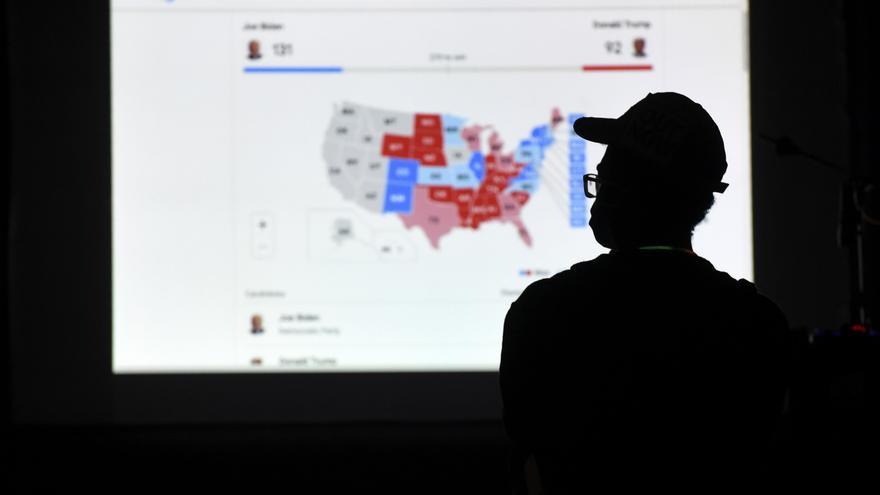 The United States dawns this Wednesday without a clear winner in an election marked by the pandemic and division after four years of scandals, lies, abuse Y tension of Donald Trump.

After Trump’s victory in Florida, the race between the president and Joe Biden is centered in the Midwest, the most contested region in the country and where the count is slower due to its way of processing the vote by mail and due to legal battles that are already underway.

Winning Florida gives Trump more ways to win the sum of key states and be re-elected. Florida is also one of the few major states to quickly count votes on election night. Biden won some of the counties Clinton had lost in 2016, but he didn’t get as many votes in counties like Miami. The president may have benefited from the mobilization of a part of the Cuban-American community in favor of the president.

The electoral map, for now, looks like the one that gave Trump victory in 2016, but Biden is close to winning Arizona, a traditionally Republican state that could now help him reach the White House.

Biden came out first before the cameras to ask for patience as he continues the count probably well into this Wednesday and said “he feels good” about the first data.

“It is not my place or Donald Trump’s to say who has won. It is the American people. But I am optimistic,” said the Democratic candidate. “Keep the faith, guys. We’re going to win this,” he said in his brief appearance before a group of supporters in Wilmington, Delaware after midnight.

A few minutes later, Trump began tweeting. The president falsely accused the Democrats of trying to “steal the elections” although there is still no clear winner in the elections and the count continues in much of the country.

The election of the next president now depends on the outcome in Pennsylvania, Michigan and Wisconsin. To be president, both Trump and Biden have to win two of these three states.

These states take longer to count than others in the country because they have not started counting all or most of the early voting until this Tuesday. The big cities in these states that are also the most democratic, such as Philadelphia, Detroit and Milwaukee, are the ones that can take the longest to count. Pennsylvania estimates that the scrutiny will end this Friday. Michigan and Wisconsin are counting on doing it this Wednesday.

Nebraska and Maine may also have a role, for example to avoid a tie. These are the only two states that do not distribute all their electoral votes to the winner throughout the territory. They are small: Nebraska has five electoral votes and Maine four. But an electoral vote can be crucial.

The complication of this year’s recount comes from the volume of votes and the unusual percentage of early voting by mail or in person.

More than 100 million people they voted in advance, in person or by mail, for fear of infection and anxiety to participate. Never before had so many people gone to the polls before Election Tuesday, and that has been a challenge for the tally in states overwhelmed by the number of votes to process.

Have already died more than 230,000 people for coronavirus in the United States, as President Trump continues to downplay the importance of the virus and threatens to oust his chief medical adviser, the respected Anthony Fauci.