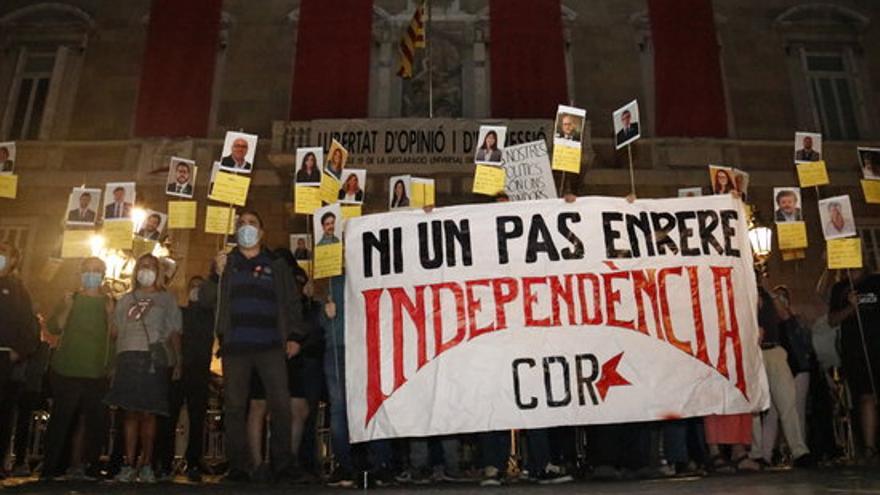 With banners with the faces of the imprisoned politicians and pro-independence flags, hundreds of people have gathered in Plaça Sant Jaume in Barcelona to commemorate the third anniversary of the October 1 referendum.

In a rally called by the CDRs in which, once again, the safety distance has not been respected, the protesters have demanded that the Government of the Generalitat apply the result of the vote three years ago and take steps towards the independence.

“The Catalan politicians, with the acceptance of the Supreme Court rulings, have ignored the sovereignty of the Parliament and the popular will,” said a spokeswoman through a small sound equipment.

“October 1, neither forget nor forgive” the protesters shouted in front of a Palau de la Generalitat decorated with four large red stripes and heavily protected, even with chains that secured the fences installed by the Mossos.

Discontent with the Catalan Executive and against the Mossos in Sant Jaume was breathed. After the speeches of the organizers, the protesters have thrown the banners towards the agents who were guarding the entrance of the Palau, at which time some flares have also been thrown at them.

“Of course we are pissed off, it’s been three years now, watching politicians doing nothing,” explained Martí and Marc (they didn’t want to give their last name), two young people in their twenties. “We were in 1-O standing up for them and last year the same, what more do they want to change something?”

At around 9 pm the protesters – more numerous than on Monday, when there were protests over the disqualification of Quim Torra – have left the square and concentrated in front of the Higher Police Headquarters, on Vía Laietana, shouting “Urquinaona, we will do it again ”, referring to the riots of last October. Until then, no serious incident had been recorded at the demonstration.