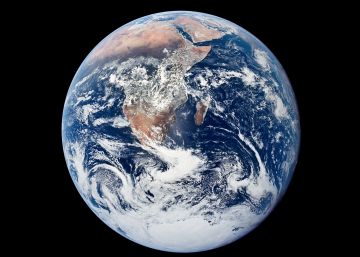 The human being has managed to take the planet on the verge of a climate collapse and a loss of record biodiversity in just over a century. Two prestigious organizations linked to the United Nations – IPCC, the group of expert scientists on climate change, and IPBES, the UN advisers specialized in biodiversity – have alerted during the last year of the enormous impacts of man's activity on nature. And, in both cases, they have warned through special reports that the countdown to avoid the disaster has begun and there is only a decade left to flip and reverse the situation.

While records of temperatures linked to a concentration in the atmosphere of the main greenhouse gas – carbon dioxide – never seen by human beings are beaten month by month, man continues to burn fossil fuels at an unprecedented rate. At the same time, species extinction has been accelerated by warming, pollution and land use and transformation.

One million of the eight million existing animal and plant species are threatened with extinction and could disappear in just 20 years, IPBES warned in May. If the pace of greenhouse emissions continues in a little over a decade, the average temperature increase will have exceeded 1.5 degrees, the most ambitious goal of the Paris Agreement, the IPCC warned in October 2018. While launching their alerts, the closure of borders in China and Asia to western waste has focused on another of the environmental problems of our century: plastic pollution of the seas and oceans.

All these scientific reports and alerts point to the action of man as the cause of the decline and, at the same time, place the beginning of the great problem in the environment of the fifties of the last century, when the consumption of raw materials and pollution. But these analyzes also point to another important place: the same human being who is behind these negative impacts on the environment has in his hand to stop that decline. And all over the world concrete people fight day by day for the environment. And even some play their lives. In 2018, 164 people were killed for defending the environment, more than three per week, according to the Global Witness NGO. South America led, one more year, the macabre and sad list with more than half of the deaths.

THE COUNTRY has selected around the world environmental heroes who face the great plagues of this century: the impacts of climate change, the loss of species, air pollution, plastic pollution, deforestation … It is about people who either from activism, from science or from both fields struggle to counteract the negative impacts of human beings on the planet. Among them, the farmer Olimpio Guajajara, visible face of the fight against deforestation in the Brazilian Amazon; scientist and activist Terry Hughes, defender of the great coral reef in Australia; Senegalese Mariam Sow, with a lifetime dedicated to the promotion of agroecology; Mburanumwe, protector of the threatened gorillas in Virung, Democratic Republic of the Congo, or Máxima Acuña, who has faced Newmont, Peru's largest gold producer in the world for eight years.