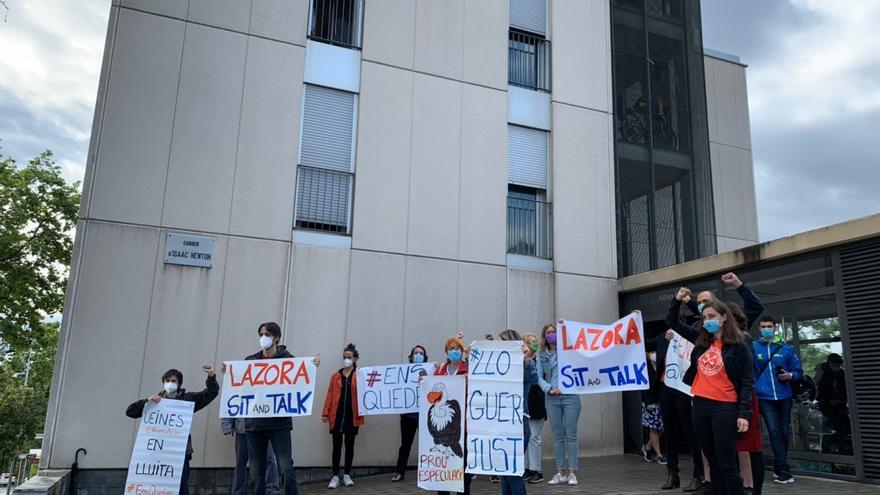 Silvia Torres, a resident of the Catalan municipality of Granollers, has become the first tenant to file a civil lawsuit against the Azora vulture fund. Torres, advised by the Sindicat de Llogateres de Barcelona and the cooperative of lawyers Colectivo Ronda, asks the court to consider void the rental contract that the fund imposed unilaterally and without the possibility of negotiation.

The contract includes ten clauses that the plaintiff and her lawyer consider abusive: among them, covert increases, the obligation to take out non-payment insurance and even the authorization to be included in a record of defaulters.

The lawsuit is "pioneering", in the words of attorney Montse Serrano. It is filed against the company Lazora SII, which according to its own data has more than 7,000 tenants and manages 13,000 homes in Spain, distributed in 160 buildings. Torres' contract is not the only one that includes these clauses: it is a standard model that Azora systematically replicates. Hence the importance of the future ruling of the judge. Asked by this newspaper, the company only says "not having evidence" of the demand and does not answer questions about its contracting conditions. "However, Lazora scrupulously complies with current regulations in all its rental contracts, in Catalonia and the rest of Spain," they add.

"It can be a precedent. If the judge annuls the clauses, the example will spread for this company and for others that apply similar ones," says Serrano. "This person was willing to carry out the claim. These procedures have costs and there are people who end up assuming the clauses. Why have we been able to do it? Because it is an adhesion contract that is drawn up for many people, such as those of telephone or electricity. That means that the tenant has not been able to agree on the conditions and that we can apply the consumer and user law and all the jurisprudence on abusive clauses, widely applied in banking law. With this lawsuit, we begin a journey ".

Torres' story began like so many, when Lazora sent him a burofax communicating a rent increase. Until then, the tenant paid 370 euros per month to the Banco Sabadell Socimi. Lazora bought the house and offered him the possibility of continuing in it paying 897 euros per month.

These are the ten clauses that it considers abusive, according to the demand to which elDiario.es has had access.

A hidden raise of 200 euros from the third year. The contract included a "36-month bonus period" during which the tenant would not pay 207 euros more in rent (a total of 1,104 euros per month). The "bonuses" are, in practice, disguised rent increases. The funds include concepts such as the IBI and the community from the third year of the contract, since the Urban Leasing Law prohibits increasing the price in seven years above the CPI.

According to the plaintiffs, the bonus is "a fiction" and the only thing that it tries to do is to skip the prohibition to rise above the CPI. Bonuses are common among vulture funds: Fidere, Blackstone's Socimi, makes exactly the same.

Obligation to contract a non-payment insurance of 270 euros per year. Azora forces its tenants to contract this product, which according to their own requirements represents around 3% of the annual rent. That is to say: if an apartment costs 800 euros per month, the tenant must pay almost 300 additional euros per year for this concept. In the case of Torres, the annual amount amounted to 269 euros per year. Azora automatically rotates these receipts and advises that the insurance company updates the prices every year.

The plaintiffs consider it "totally illegal, insofar as it responds to the interest of the landlord and not the tenant." In addition, the fund imposes an undetermined annual expense, "leaving the user in complete ignorance."

Obligation to sign that "the clauses have been negotiated individually". Although Torres tried to negotiate and read the contract some time before signing it, Azora refused. Once in the office and on the day of signing, the company told him that the contract could not get out of there and that the only option he had was to sign it or withdraw the operation. In spite of everything, the contract establishes a clause that says that "the conditions have been individually negotiated, each and every one of them being examined, discussed, understood and agreed explicitly".

The lawsuit considers it, again, "a fictitious fact", since the contract was drafted unilaterally Azora and not even sent it before signing.

Right to have the fund carry out "periodic visits to the home". Clause 11 of the contract says so. "In order to facilitate the conservation and maintenance of the facilities, both parties agree that the landlord may make periodic visits to the farm, prior notice to the tenant, in order to check the good condition and operation of all inherent appliances, facilities and utensils to the house".

This clause, the plaintiffs point out, contradicts the Catalan law on the right to housing, which stipulates that visits can be made with consent and provides for the possibility of establishing a calendar. Azora does not stipulate the frequency or date of the visits, it only gives the option of "prior notice".

Give up rights if your supplies are cut off. If the water, gas or electricity company cuts the supplies or if there is a problem with them, the tenant will not be able to request compensation from the landlord, although it is his obligation to guarantee them. The clause also implies "lack of reciprocity, since it provides that the tenant continues to fulfill its obligations":

The fund can keep the bond if the tenant paints the walls or makes holes. Clause 2. "The walls will be delivered without holes and painted in white. In the event that the tenant returns the house with the walls painted in a different color, or with holes in them, he will bear the cost of restoring the walls to their initial state. , the lessor being empowered to retain the total amount of said expenses of the surety or other additional guarantees provided by the lessee ".

According to the lawsuit, this clause is abusive, mainly because the plaintiff lived in the house before Azora bought it - she does not know the state of the house. The bond regulations also do not foresee that the house be returned in the same state as it was delivered.

The tenant authorizes the fund to include him in the defaulter registry. "This not only exceeds the legal powers of Azora, while to incorporate personal data the LODP says that it is necessary to meet certain requirements. It is abusive because it limits the rights of the tenant and is not a reciprocal clause: the tenant could not incorporate Azora to the registry of defaulters if they do not return the bond, for example, "says the lawyer.

Penalty for taking time to deliver the keys. For each day of delay in delivering the keys once the contract ends, Azora charges "an amount equal to three times the current daily rent."

"This means that if a rent is 900 euros, it would correspond to about 30 euros a day. No equivalent penalties are foreseen for the case that the person who fails to comply is Lazora," says Serrano.

No refund of expenses. If the fund breaches the contract, the tenant is not entitled to compensation. The clause reads as follows: "The termination of the contract will not generate in favor of the tenant the return of any amount".

"It is a non-reciprocal clause", considers the lawyer, "because if it were the tenant who breached the contract, he would have to financially compensate Lazora."

Expenses for non-compliance. If there is any breach, it is the tenant who must bear the extrajudicial or judicial expenses. The clause, understands the plaintiff, "exceeds the powers of a judge, who is the one who must decide who bears the expenses in the event of a civil proceeding."