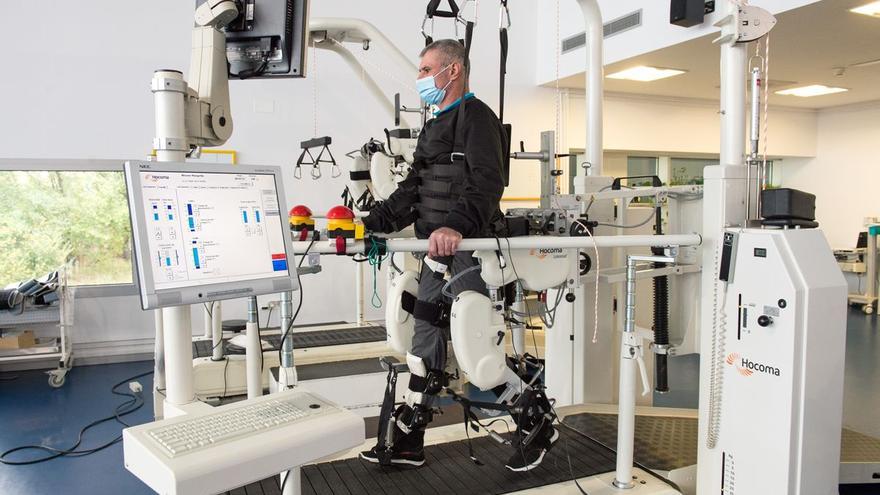 It is a milestone of science: three people who had been left paraplegic have managed to get back on their feet and walk. The technique, developed by a team of Swiss researchers, is part of a clinical trial that is still in progress but has caused enormous expectation. The news has been received with "enormous joy" at National Hospital for Paraplegics of Toledo, how do you explain to THE NEWSPAPER OF SPAIN the doctor Angel Gil Agudo, head of the rehabilitation service of the Castilian-Manchego health center, a reference in the approach to spinal cord injuries in Spain.

It has been a morning of emotions at the Hospital for Paraplegics. enthusiasm and joy. Also prudence after knowing the results of an investigation -published in the magazine Natural Medicine- which started in 2018 signed by the researcher Gregoire Courtine, from the Federal Polytechnic School of Lausanne (Switzerland), and Jocelyne Bloch, from the Vaud University Hospital Center (Switzerland). Scientists got a patient with a partial spinal cord injury to start walking with the help of a walker by using electrical stimulation to reactivate spinal neurons. Currently, these two researchers have managed to perfect their system with controlled implants by artificial intelligence software. A finding that has already allowed three patients with spinal cord injury complete walking again.

"We want to join that bandwagon"

Dr. Angel Gil attends this newspaper first thing in the morning, after the clinical session held every Tuesday by the service heads of the Hospital for Paraplegics, in which, of course, the finding of his Swiss colleagues has been the star issue. "We have discussed this issue. Due to its novelty and the need to be able to join a car of this type or how apply it somehow", he explains to this newspaper.

"We need to talk to patients with a balance between optimism and caution," says Dr. Ángel Gil.

But also, he specifies, because all the professionals that same day are going to "visit and see patients and the first question will be: 'When can they apply it to me?' expectation they have raised. that balance between optimismbecause the patient also needs to have expectations, and caution".

A technique that cannot be applied immediately

In Spain, they are produced every year between 800 and 1,000 spinal cord injuries. Spinal cord injury is a disorder of the spinal cord, due to trauma, by disease (for example tumor) or congenital origin (spina bifida). Depending on the degree of damage of that injury it can be complete or partial. Depending on the level at which the damage occurs, the consequences can be more or less serious: tetraplegia or paraplegia. Traumatic spinal cord injury can cause physical disability and complications long-term complex: approximately 60% of chronic patients depend from a wheelchair and more than 97%, if the injury is complete at the time of the trauma.

In Toledo, they have 220 beds, almost fully occupied. The Swiss scientists' achievement opens a huge door of hope, says Dr. Gil. But he insists on that balance that, as rehabilitators, they must show "between the joy that this type of finding gives us and the caution in transferring the information. It is great news, it confirms the good results, but the technique cannot be applied immediately to patients". In Toledo, he clarifies, there is enormous enthusiasm around a job that Dr. Gil has known for years. The head of the rehabilitation service of the Hospital for Paraplegics details that the first works of the Swiss researcher Gregoire Courtine went with animal models. "In humans, it is not the first work he has done either, but the difference is that, in the previous ones, it was in patients with incomplete lesionsin which it is possible that there is some sensitivity in the legs, so it is more likely that there will be a recovery, even spontaneous". The validity of this new research by the Swiss team, adds the specialist, is that it is the first job "what to do with complete injuriesthat is, those in which there is no mobility, nor sensitivity below the level of injury, which initially have a worse prognosis. In which there is less hope of recovering some mobility. That is why it is a plus of difficulty to find something like that, "he continues.

In your hospital, they are open to any involvement with the Swiss. "For these treatments to be applied here or even to participate with these research centers to see if the technique can be replicated in Toledo, or we can expand the sample," he says. Would it be too complex?. "It is a procedure that has its complexity, not so much from the neurosurgical point of view," he answers. Dr. Gil explains that the latest procedure it is all the engineering part that there is around the electrical stimulation and the parameters of the stimulation and, also, the training of the person to manage that system. Thus, it relates a first surgical step, the installation of the electrode with the programming of all the stimulation variables and, later, and very importantly, patient training.

"The stimulation works are not 'flower of a day'. In U.S There is already an epidural electrical stimulation group, and we have participated with the Guttmann Institute -a hospital specializing in medical-surgical treatment and comprehensive rehabilitation of people with spinal cord injury, located in Barcelona- in terms of stimulation, but superficial, without implanting the electrodes in the spinal cord", details the doctor.

In fact, patients with spinal cord injury at the Toledo hospital will be able to try at the end of February or beginning of March a hybrid walking assistance robot with the aim of improving its mobility. This technology combines robotic systems, such as external mechanical support to provide force, and neuroprosthetics, to generate stimuli in the muscles and empower movement.

In the health center of La Manchaconcludes the head of Rehabilitation of the center, the profile of patients has changed: traumatic spinal cord injuries due to falls are becoming more frequent than those caused by for traffic accidents in young people, which have decreased remarkably in the last fifteen years. So, the average age of the patients was a man between 25 and 35 years old. Currently, the doctor details, there are more falls in older people with an average age of between 45/60 years.