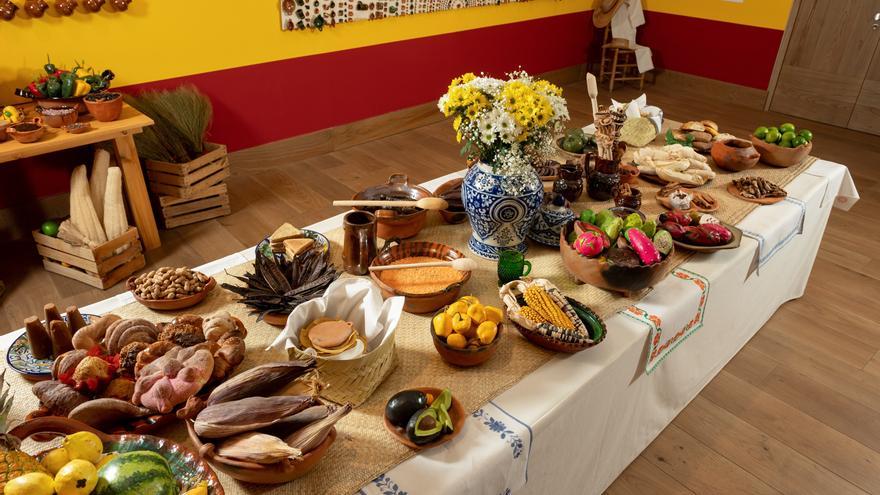 Madrid, Apr 5 (EFE) .- 500 years ago the first culinary globalization in history took place through the routes of the Nao de China, in which food, spices, utensils and culinary techniques traveled from Asia to Europe through de México, a milestone that Casa de México commemorates in Spain with the exhibition “La mesa novohispana”.

To understand this gastronomic miscegenation, the exhibition “Screens and castes” has also been organized, which allows us to see for the first time in Spain, and thanks to the collaboration with the Banamex cultural fund, paintings of a new genre of painting born in the viceregal period , which reflects the racial mixtures resulting from that encounter.

“It is the only complete series dedicated to the castes, in which up to 16 are recognized. They are customary paintings of anonymous origin that also show how they lived, dressed and ate,” the cultural director of Casa de México, Susana Pliego, told EFE.

Next, “La mesa novohispana” explains “how current gastronomy could not be understood” without that period and its intense commercial exchange. “The kitchen was the center of New Spanish life, either in farms or in convents”, and this is reflected in an exhibition with more than 2,000 pieces open until April 21 and designed by Cristina Faesler, adds Pliego.

Because from the 16th century, indigenous, European, African, Asian and Arab influences constituted the gastronomy of a new culture in which “Mexico was the center of the viceroyalty in New Spain, a period little studied but very rich,” he highlights.

In it the first commercial route between Asia, America and Europe was established with the Manila Galleon, which carried all kinds of merchandise between the Philippines and New Spain through the Pacific Ocean; once they arrived in Mexico, they were sent by land to the Atlantic coast, where they continued their journey to Spain.

This gave rise to the most global table in the world, in which Mexico contributed ingredients such as corn, avocado, cocoa, chili, beans, tomato or vanilla, and received others such as rice, sugar, cinnamon, onion, pepper, chickens, pigs, cows, wheat and wine.

“The New Spain period is that of the flourishing of Mexican gastronomy, today recognized by UNESCO as Intangible Heritage of Humanity. This installation seeks to show the origin and development of what today makes us great,” they explain from Casa de México in Spain, based in Madrid.

But not only ingredients are shown, but also the utensils that were used in that New Spain cuisine such as comales, metates or molcajetes, which are still used today in Mexican kitchens and restaurants, and kitchens of the vice-royal era are reproduced, fed with firewood, in addition to show the process of making corn tortillas, essential in the cuisine of the Central African country.

One of the most striking pieces is the “pot fan”, made up of more than 1,400 pieces of different shapes and sizes from various Mexican regions.

“The way of distilling and growing the vine was taught to us by Europeans, as well as livestock, but Mexico contributed to the world its vast pre-Hispanic pantry,” says Pliego.

Some of their products failed to establish themselves in Europe, such as sapote or jicama, but they can be seen in this exhibition, a continuation of “La mesa de Moctezuma”, which focused on the ingredients that Mesoamerica gave to the world.