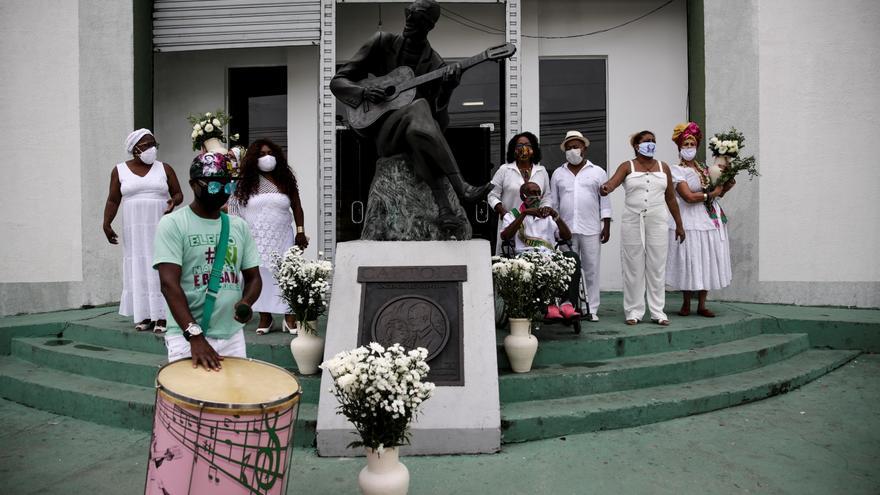 Rio de Janeiro, Feb 12 (EFE) .- A symbolic act to exalt the carnival tradition of Rio de Janeiro and pay tribute to the victims of the covid-19 replaced this Friday the traditional handing over of keys to King Momo, with which it began official to Carnival, after the cancellation of the biggest party in Brazil.

But the act without an audience led by several samba personalities and former composers in front of the doors of the Samba Museum, adjacent to the headquarters of the famous and popular Mangueira samba school, also served to protest the total helplessness in which they were left, after the cancellation of the Carnival, hundreds of families who live from the party.

King Momo did not receive the keys to Rio this year, for the first time in the last 180 years, as authorities canceled Carnival to prevent further expansion of the SARS-CoV-2 coronavirus amid a second and more virulent wave of the pandemic in Brazil, the second country with the most deaths in the world from the disease (some 236,000 victims) and the third with the most infections (9.7 million cases).

With the festivities canceled, the “sambistas”, who said they understood the decision and paid tributes to the victims of the pandemic, organized a symbolic act on the day that Carnival would begin to make themselves heard, and not only for their songs but also for their protests.

“We are in this act expressing our condolences for those who left but also our concern for those who are alive but are unemployed because there is no Carnival. We hope that the authorities become aware of this and can help us,” he told Efe the composer Tiaozinho da Mocidade, member of the Board of Directors of the Samba Museum and old glory of the Mocidade Independente samba school.

“Carnival is one of the greatest cultural expressions in Brazil and perhaps in the world. But although it seems like just a party with a lot of fun, it also generates a lot of jobs. Many people depend on Carnival for their day to day, to live, to eat. Carnival generates joy but also wealth for the country and for those people, “he added.

For Nilcemar Nogueira, founder of the museum and granddaughter of the legendary composer Cartola, despite the fact that organizing the parties at this time is not feasible, the authorities have to offer alternatives for those who lost income.

The cancellation of the party left the streets practically empty that used to be filled with millions of partiers following the comparsas and gangs, the hotels with only half of their rooms occupied and thousands of Cariocas without a livelihood.

In addition to employees of hotels, restaurants, bars, costume and trinket markets and even street vendors offering beer, the cancellation of Carnival threatens the livelihoods of designers, carpenters, welders, seamstresses, mechanics, composers, musicians and dancers who work all over the world. year to offer four days of festivities and impeccable parades in the Rio party.

Last year, 2.1 million tourists -about 500,000 foreigners among them- visited Rio during the festival and left about 3.8 billion reais to the city (about 717 million dollars, at current exchange rates), a record for the “city maravilhosa “, which in recent years had managed to increase the number of visitors.

The merchants’ employers estimate that the cancellation of the party this year will generate losses of some 2,700 million reais (509 million dollars) in Rio de Janeiro alone.

In the “symbolic opening” of the canceled Carnival, the old glories performed “a spiritual wash”, paying homage to the victims of the covid-19, including members of samba schools and comparsas, with solitary drumbeats, and chanted some historical sambas .

“We wanted to celebrate the culture of samba and Carnival on the day that King Momo would be receiving the keys to the city. It is not a party but rather an act of sambistas to honor those killed by coronavirus and our culture” Nogueira explained.

The cultural producer Geisa Ketti, daughter of the late composer Zé Ketti, assured that the Government has to recognize its responsibility for the cancellation of the Carnival and offer help to those affected.

“We are suffering a lot because our government was denialist until now. We could have had Carnival if we had assumed the responsibility of vaccinating, of buying vaccines from China much earlier,” said Ketti, alluding to President Jair Bolsonaro, one of the most skeptical rulers about the severity of the pandemic and that came to threaten, for ideological reasons, not to buy the Chinese antidote with which Brazil is vaccinating the population.

“They only began (to vaccinate) now, unfortunately. And everything was delayed. Even our happiness,” he denounced.