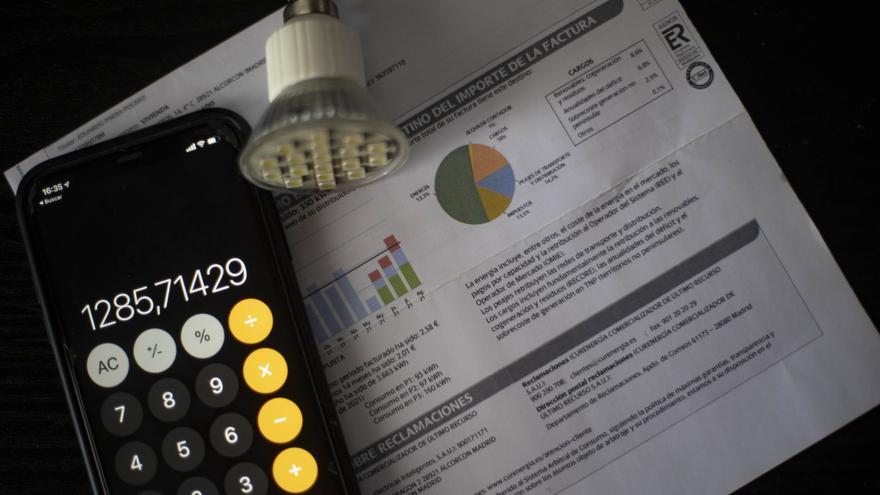 A study by CaixaBank Research concludes that the electricity bill of Spanish households in 2021 was “similar” or even lower than that of 2018. The conclusion of the report, based on the analysis of the electricity bills domiciled by some 2 million private clients of the entity, is in line with the promise made in September by Pedro Sánchez.

The President of the Government promised, on the eve of the approval of a shock plan to mitigate the impact on the receipt of the exponential rise in the wholesale electricity market, that “by the end of the year, citizens will have paid on average the same than in 2018 thanks to the intervention of the Executive”. According to that recently published study, “throughout 2021 the amount of the median electricity bill was quite similar to that of 2018, a pre-pandemic year” in which the prices in the wholesale market, he recalls, were “similar to those of the first semester of 2021”.

The explosion of what is known as the pool came in the second half of last year, spurred on by the crazy rise in natural gas on international markets, which has eased somewhat in recent weeks but remains at historically high levels. The measures adopted by the Executive (reduction of the VAT on electricity, temporary suspension of the electricity generation tax, drastic cuts in the regulated part of the bill…) made it possible to cushion the blow. One of them (the reduction of the so-called charges) has partially declined since this month of January, while the tax cuts have been extendedUntil spring for now.

“The government measures have had an impact, although they have not reached everyone in the same way,” sums up Josep Mestres, an economist at the Spanish Economy unit of Caixabank Research and co-author of the study with Alberto Graziano, senior data scientist at the Caixabank Research Unit, in a telephone conversation. Sectorial analysis.

In their analysis, both have taken into account not an arithmetic mean, but the median: a numerical value that separates the upper half of a set from the lower half and is often used to compare widely dispersed magnitudes with each other.

“We have chosen the median because it is less influenced by extreme values, both low and high, and it reflects the situation much better,” explains Mestres. “It would be the most typical receipt for a home,” he adds.

The authors have only taken into account those domestic customers (neither self-employed nor SMEs) who have not changed from the regulated rate to the free rate over time and whose bills (which in Spain can be monthly or bimonthly) have the same periodicity during all year. According to the study, in the accumulated of 2021 the median electricity bill (half of the households paid a lower amount and the other half a higher amount) stood at 743 euros, 0.6% below the 748 euros of 2018. Taking into account inflation, the fall was 5.1%.

These are different figures from those provided by the Government at the end of the year. So, the Executive encrypted the effect of its measures in a cut of about 84 euros in the annual bill, leaving the 2021 receipt at an average (in this case, an average based on all types of domestic consumers) of about 613 euros , compared to 608 euros in 2018 and 696 euros to which it would have risen without the decisions adopted.

According to Caixabank researchers, in the first quarter of last year, the median receipt was 68 euros per month, the same as in 2018. But in the fourth quarter of 2021, after the government’s measures, it was 60 euros, a 3, 6% less than in the same period of 2018. This, despite the fact that in the last months of 2021 the pool broke all records. The last one so far was recorded christmas eve eve, as the megawatt hour in the wholesale market exceeds 383 euros on a daily average. 2021 was the year with the most expensive pool in history, with an average of 111.4 euros per MWh, compared to 57 euros/MWh in 2018. That year it was never above 80 euros.

Of course, the result of this analysis of domestic bills, as expected, “changes radically” depending on the type of contract, as the study indicates. And it is that this escalation, and this was recognized by the Government after Sánchez’s promise, has had a direct reflection on consumers benefiting from the semi-regulated rate of the voluntary price for small consumers (PVPC), in which they are somewhat less than 40%. of low-voltage supplies (households and many SMEs) and that, in many cases, have paid more than in 2018 and than in any other year.

These contracts have traditionally been the cheapest. But they have been the most affected by the rise in the wholesale market: in them the hourly cost of energy is directly referenced to that of the pool and immediately picks up its fluctuations. These contracts are also the ones that largely explain why the CPI soared in the last quarter of 2021, because they are the ones that the INE has taken as a reference so far to measure inflation. a methodology whose days are numbered.

Thus, according to the study by Caixabank Research, in the regulated market the median receipt amounted to 54 euros per month in the last quarter of 2021, 13% more than in 2018, 28% more expensive than in 2019 and 32% more expensive than in 2020, when the pool sank due to the pandemic. Depending on the amount of the invoices, “in the lowest percentiles we see falls that are surely related to recipients of the social bonus; and in the median and especially in high amounts we see very important increases”, summarizes Mestres.

As the authors of the study point out, “these marked differences are due to the fact that, in the free market, energy prices are fixed for the period established in the contract and are only updated when it is renewed, so that tax reductions have benefited households that have this type of contract.In contrast, in the regulated market, energy prices are variable and change every day and hour (correspond to the so-called voluntary price for small consumers, or PVPC), so price increases have been transferred more quickly to the invoice and have been higher than the tax reduction”.

In the regulated market, moreover, “receipts of greater amounts are more affected by the rise in energy prices.” In the highest percentile (119 euros), they were 22% more expensive than in 2018, an increase much higher than the average regulated receipt. On the other hand, the temporary reduction in prices for the beneficiaries of the social bond (up to 70%) is observed in the lowest amount receipts: the lowest percentile receipt in the last quarter (18 euros) was 18% lower than the of Q4 2018.

But here are some great forgotten: the vulnerable households that have electric heating and whose consumption exceeds the limits subsidized by the social bond. Several social organizations called for the temporary removal of these limits a few weeks ago on the eve of the arrival of winter. There have been cases such as that of an 85-year-old woman from Maó (Menorca) with electric heating and the maximum discount of the social bonus who in December paid a bill of 164 euros, well above the 140 euros that he receives as a monthly pension.